For the last two days we’ve been trying to establish exactly what is going on at the Queen’s Viaduct in the lower Irvine. This week work commenced in the tidal waters just upstream of the viaduct carrying the main Stranraer to Glasgow Central rail line. It seems difficult to believe that we and every angling Club on the river Irvine were unaware of the planned works but that’s exactly the case. 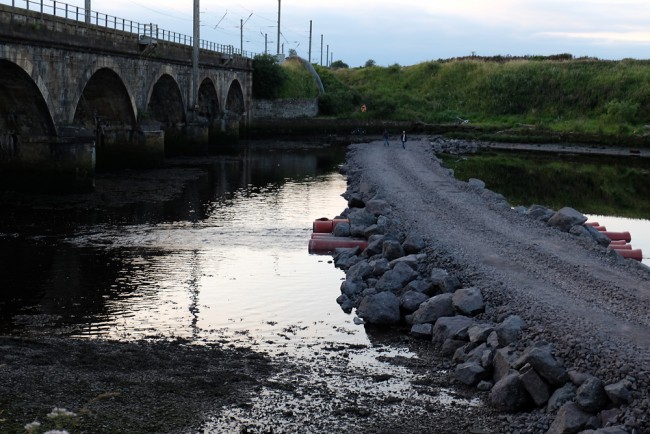 The temporary structure (road ) across the Irvine that has appeared and grown since the start of the week.

After a couple of days phoning around and waiting for return calls, this afternoon  I managed to speak with Marine Scotland’s Licensing Department for Marine Construction works. Normally I speak to SEPA over matters affecting works in stream but when I called them in Ayr on Monday, no one knew anything about this work. I called again on Tuesday morning to see if anyone had found out who was dealing with this and was informed that it’s a Marine Scotland issue as it is in tidal waters. Muir called several numbers looking for information and finally this morning he received a call back from the department in Aberdeen that issued the licence for the work. When I returned, I immediately called to get the information I needed.

Here are the facts that I obtained from the phone call and in an email sent from Marine Scotland following our discussion:
1. As no DSFB is in place, Marine Scotland were required to advertise the proposed works in a formal notice published in a local paper (Irvine Times 17/06/15). This is the bare minimum for compliance with consultation requirements.

2. No objections were received following the advert and therefore the licence was issued with 24 conditions.

3. The licence was issued for scour protection and refurbishment works.

4. 24 conditions are attached to the licence, 10 of which appear to relate to navigation and other maritime lighting issues. Of the remaining 14, only 6 relate in any way to environmental protection (with limited detail) and just 1 of them relates to living marine resources. There’s no mention of migrating salmonids, resident trout, eels, lampreys, or any fish species that may reasonably be expected to live in the tidal waters of the river and estuary.

5. No provision was stipulated for migratory species.

6. The works and method statement have been approved and issued with a Licence for Marine Construction Works to take place by Marine Scotland licensing department, Aberdeen.

7. The main contractor applied for the licence on or around the 12th May this year to allow works to take place between the 1st June and the 31st July 2015.

9. The duration of the works was expected to be 2 months.

11. The work is to reinforce a pillar foundation where scouring has been severe. Masonry restoration will take place at the same time

12. No attempt was made to contact ART, The River Irvine Improvement Association and angling clubs as the department were unaware of the existence of any of these bodies. 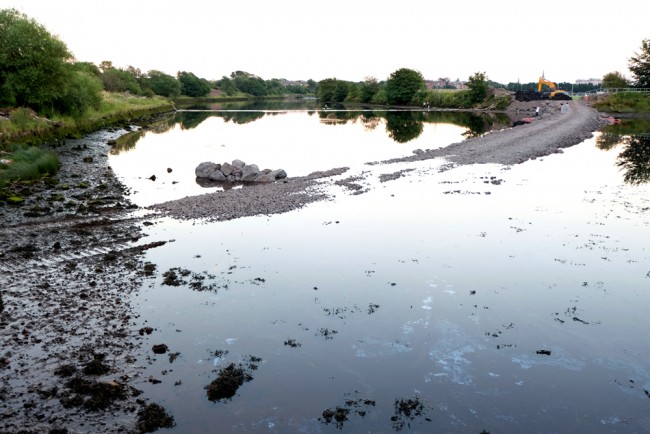 Shortly after low tide low tide and the incomplete road is a complete barrier across the river except for 6 small and inadequate pipes near the inside of the bend. Did I mention oil….. that’s the least of our worries at the moment but it is just another issue that’s obvious in this photograph. 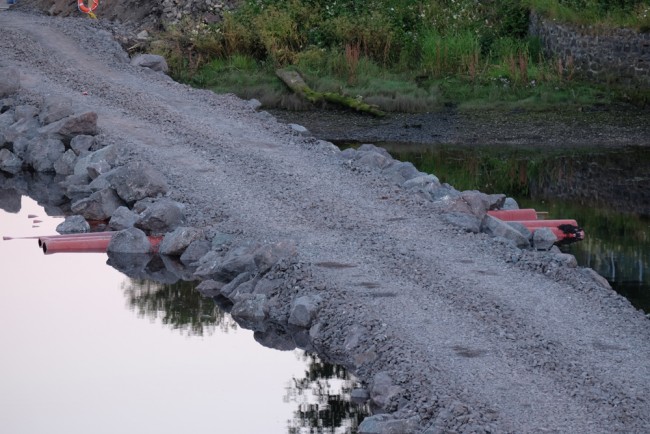 At least the pipes aren’t perched except at low tide.

Frankly, I was shocked to hear that no effort was made nor required, to contact any of the angling interests or the Trust and that a Government department within Marine Scotland was unaware of ourselves or the Trust network that exists (any member of  which would have pointed them in our direction from a simple phone call). ART are unhappy with this level of consultation on an important salmon and sea trout river. The work is taking place at a notorious poaching back spot and I’m sure there will be many migrating salmon lost as we have just entered the peak months for migration in Ayrshire Rivers.

We have already notified the River Irvine Improvement Association of the works and the bailiffs and will continue to seek assurances that adequate provision for salmonid migration will be provided. Atlantic Salmon are a protected species after all. I will be on the phone tomorrow once again with Marine Scotland and this time I’ll also be calling Marine Scotland Science at the Lab. I have many more points to raise over this issue. We expect better than this from all Government departments.