As promised, I can now update readers with progress at the Queen’s viaduct on the Irvine.

I met with the site manager, his foreman and the sub contractor’s agent this morning and received a full explanation of the planned works and timescales. I was pleased to hear that the job is already ahead of schedule and they are expecting to shave at least one week off the overall 9 week contract. They are in their 3rd week on site but only the second week in the river. Basically they are anticipating another 5 weeks on site if they continue at the current rate of progress. 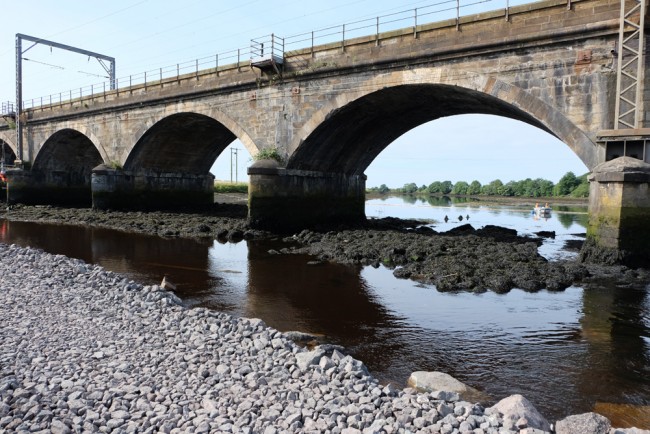 The bridge piers where scour protection is being installed. The rock build up below the arches will be cleared to form a channel to allow better fish access through the middle areas and away from the banksides.

The job involves reinforcing two of the viaduct’s piers that have become eroded. Scour protection in the form of rock armour is being placed around the eroded areas and the first section on the right bank (looking downstream) is near completion. Following that they will move onto pier 3 and establish a dry working area. As they do this, the flow will be restored to the arch on the right bank. A small amount of concrete works is required to fill a void in pier 3 followed once again by scour protection. In total, approximately 800 Tonnes of rock armour is being place in the river. 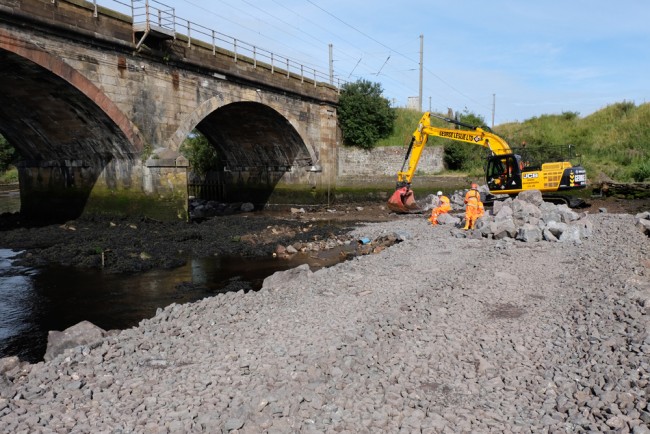 Rock armour going into the river around pier 1. Once this section is completed, the road will be removed from the far bank and flow restored through the far arch although the bed will be left an uneven field of boulders and very shallow. This may deter fish passage through the bankside arch at all but high flows.

We discussed our main concern of fish passage at length and the contractors were keen to help in whatever way they could. We agreed that more pipes would be installed near pier 3 where currently the main flow and deeper channel exists. This should enable salmon and trout to find an easier way into the river before high water is reached. Currently, at high tide, the river over tops the road near the right bank and salmon have access over the temporary road. As work progresses, this road will be removed and access improved but in the meantime, the extra pipes will provide an added and less visible option for the fish. 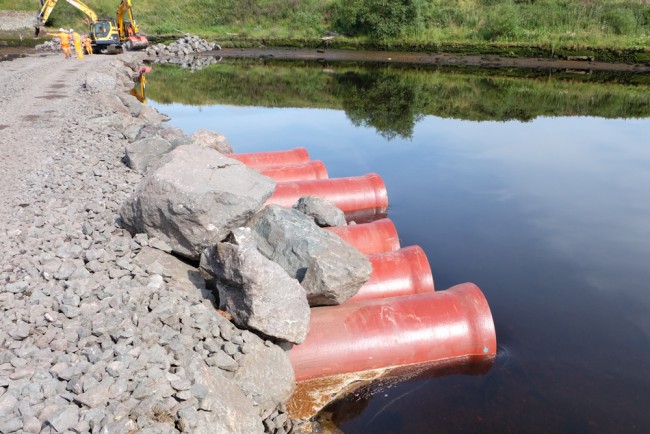 Currently 6 86 pipes are in place to allow fish passage to the river. A further array will be added towards the far bank near pier 3. These pipes (and the extra ones going in) are installed on the river bed and accessible at all flows. 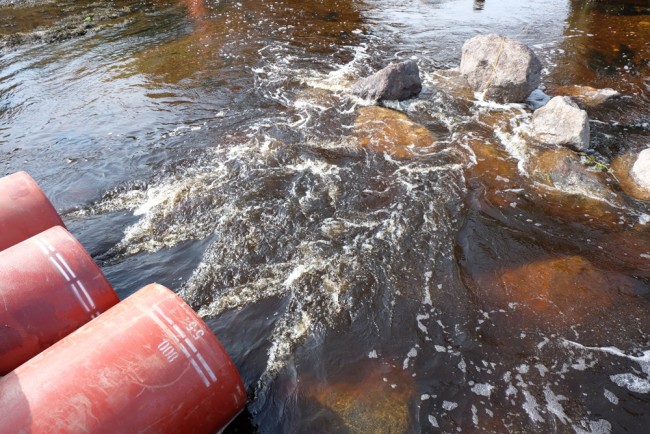 The outfall of the pipes have rock armour downstream to offer scour protection and creates turbulence that will offer a degree of protection to fish. At high tide the pipes are well blow the surface and a safe route for migrating fish

Bailiffs have been at the site already and briefed the contractors on the issue of poaching. Obviously much of the discussion around fish passage was also aimed at reducing the opportunity for illegal activity. I’ve requested that extra security fencing and video monitoring be installed and the contractors have agreed. Anyone tampering with, or inside the secure zone will trigger alarms and automatic texts to the police office just a few hundred meters away. The extra pipework and rock armour boulder field in the right hand arch should reduce the opportunity for interference. I also requested that a deeper channel be created if possible under the archways between piers 3 and 4 and this will be done too and should have longterm benefits for fish passage in future. Encouraging salmon to run the river away from the banks seems sensible particularly in an area notorious for snigging.

The final part of the job involved pointing the archways and this is well underway. I’ll keep an eye on things and have left the contractors with my contact details should they have any concerns as the job progresses. As works progress, I’ll add updates to these pages. 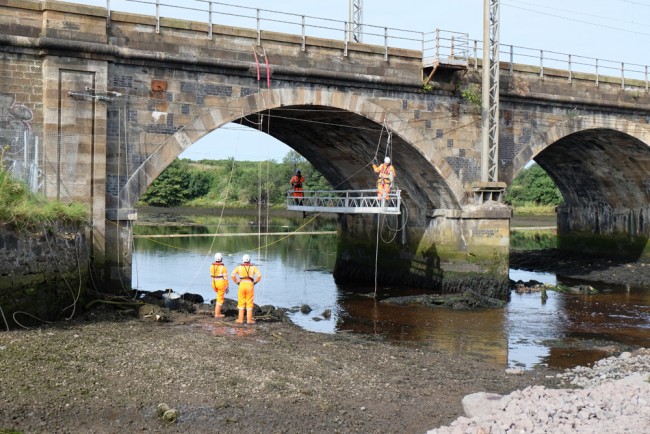 Taking the opportunity to carry out repointing in each archway is sensible at this time.

I’m pleased that the contractor’s have been so proactive and willing to hear and act on our concerns. We have to accept that had we had advanced consultation, that we would have recommended alternative arrangements but it’s too late for that and we have agreed the best possible methods under the circumstances. AMCO (Network Rail’s contractors) will in future contact ART for our opinion and advice during the early planning stages for any works they undertake in Ayrshire rivers in future. They were grateful and keen to get things right. The lack of a DSFB in this case appears to have led to an oversight within Marine Scotland’s Licensing department. Having spoken with the head of Marine Science Scotland again this afternoon, we are agreed that this could have been avoided with a simple phone call between the Licensing department in Aberdeen and the Science department at Pitlochry. It has been an oversight and one that I’m sure will not be repeated quickly.

Our thanks to John Armstrong (Marine Science Scotland), Jeff Gibbons (Scottish Government) and the Contractors (AMCO and George Leslie’s) for helping get to the bottom of this and quickly finding solutions to the problems. Moving swiftly on…c’mon the fish.