Every day is interesting at the Trust but some more than others. Today’s work came about rather unexpectedly due to a vehicle breakdown. Our reliable and hard worked Citroen Van has developed a small fault with its immobiliser after the key ‘plipper’ was immersed last week. Rather than take the van out and about whilst we await for a new part arriving, we changed our plans and seized the opportunity to head out to Glenmuirshaw to download the temperature logger’s data in a borrowed four wheel drive vehicle. We had planned to do this a month ago following an offer of a lift from Bill Menzies but we had to cancelled due to high water on the day.

Three of us, all our equipment and Brewster the dog, piled into the Land Rover and headed off on a lovely bright morning. The main aim was to download data from a temperature logger that gathers a year’s worth of water temperature readings at a time, from high up on the Lugar catchment. This site is a long way off the public road but there is a rough track used by shepherd and shooters and possibly more than a few walkers. The last time I was there to install the logger, I went in the Citroen and although we made it most of the way along the track, we fell short of Glenmuirshaw. It was a job for a 4×4 if we ever wanted to reach the end of the road. The second aim was to electrofish a site at Glenmuirshaw. It has been fished twice before but not since 2006.

Recent forestry clearance near Dalblair would have rendered access impossible with the van as the road has been churned up but we ploughed through the ruts and after a short while reached High Dalblair. 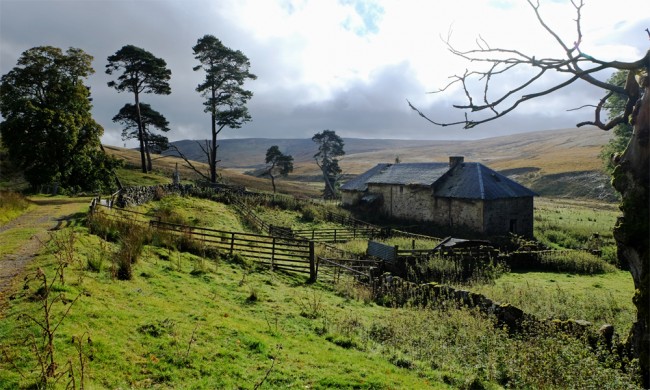 High Dalblair steading is now a ruin. We carried on past this to our goal.

On we went past the Citroens limit and eventually Glenmuirshaw came into view. The track ends at the ruin so we set off and fished the river full of expectation. 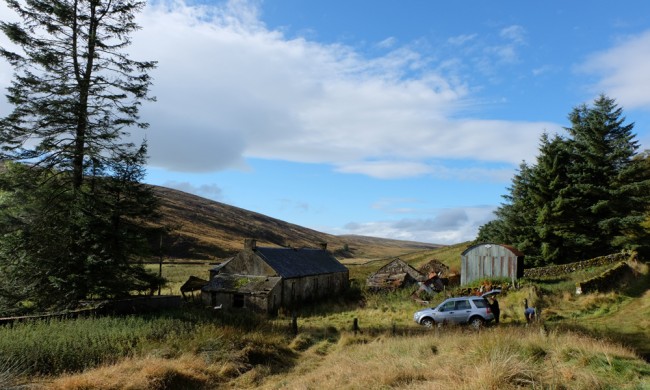 The end of the road at Glenmuirshaw. We set off on foot for a short walk to the river from here.

On previous occasions, salmon densities were remarkably consistent with approximately 74 salmon per 100 square meters on each occasion.Todays results by comparison were extremely disappointing at 21 salmon per 100 square meters. This from a virtually pristine habitat where until recently, numbers were excellent. I was disappointed as we left but committed to return more regularly to keep an eye on things. I expect I’ll be counting redds at spawning time later this winter.

We back tracked towards High Dalblair stopping to download the data from the temperature logger. 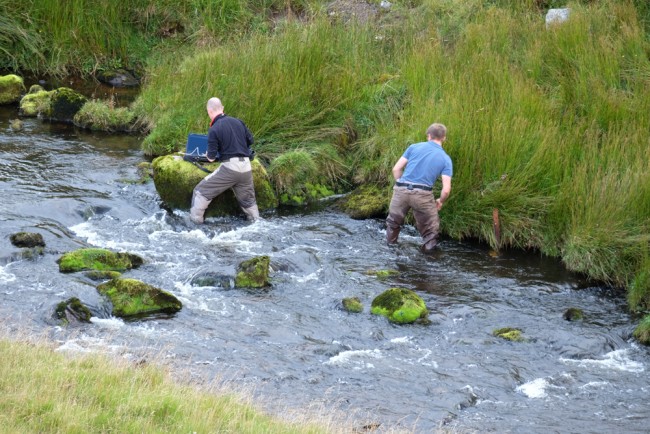 Muir and Struan downloading the data from the temperature logger

This completed, we left the Ayr catchment and stopped for lunch before heading into Kilmarnock town centre to monitor a site there. Following the work to replace the storm water system during which there was a temporary road constructed over approximately 500m of riverbed, we have been monitoring recovery of the area. As ever, we found salmon and trout in full view of passers-by, who peered over the sanded Street footbridge with amazement as we captured a few fish using our strange fishing methods. This site before the works had supported good numbers of both species but the habitat has changed somewhat and now lacks some of the deeper pools where trout survived. 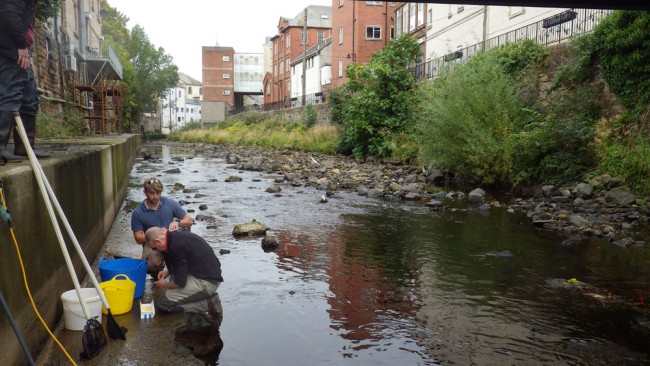 Our activities at such a public site is always sure to draw interest from the footbridge overhead.

Besides that, the weir at the bottom end of the culvert a short distance upstream no longer poses an obstacle in it’s current state of disrepair s I expect fewer salmon are spawning in the town centre, instead moving further upstream and over the Black Rocks Waterfall and Dean Ford which are both now easily passable. I’m not worried by the poorer results in this instance as we are finding salmon and trout much further upstream than previously. I expect in a few short years this small catchment will add significant numbers of smolts to the Irvine’s run annually.

Whilst at the town centre site we did capture 2 fantastic salmon parr… probably the two biggest ever recorded in Ayrshire at this time of year. We have taken scale samples to age these fish but I expect they will be 3+years old. These two salmon were 179mm and 190mm respectively. The only bigger parr I recall was a 195mm parr from the Annick Water early one year during a salmon in the classroom demonstration, so was probably about to smolt. I wonder what size these two parr will be when they head to sea. I wouldn’t be surprised if they were over 200mm by then which would be incredible. 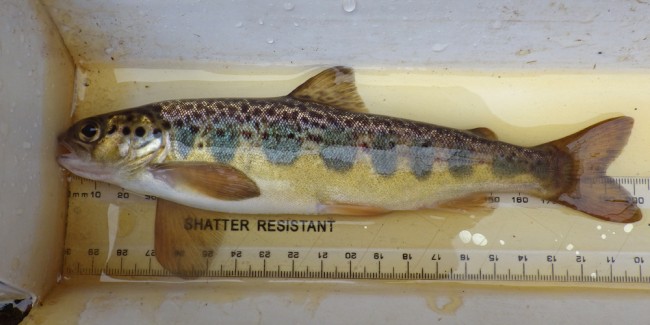 190mm of salmon perfection. What a fish!

We headed upstream on the Craufurdland and found very good numbers of trout and a few salmon fry in our site. This is encouraging as we know these are naturally produced fry and not stocked. This river will recover all by itself if allowed to and it won’t take long judging by the results we’ve had over the last 3 years or so. I can’t wait to see this in 5 -10 years when salmon will be returning regularly in increasing numbers.