The weir behind Minnishant on the Culroy Burn isn’t a complete barrier to migration but I’ve no doubt that it stopped some fish from progressing upstream and it was on our list for some improvements in the next year or two. At well over 1m high and 10m long and built with tightly laid river boulders, it was fairly stable apart from a small hole that was opening up in the middle (which we felt may offer fish a resting pool) and at the toe of the weir where it was cutting back and would eventually have made migration difficult or even impossible. Surrounded by large trees and a large cliff face at the upper end on the right bank, I thought it would require some serious engineering to ease this obstacle but I was wrong.

The Culroy weir a year ago, relatively intact and structurally sound. The white water in the centre of the weir was where a small hole was opening up. The tow of the weir was cutting back and may eventually have caused increased problems for migration. 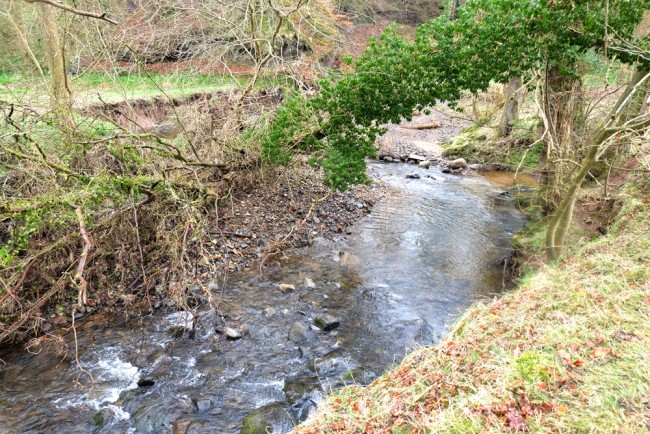 Virtually the same view, 1 year on. Things have changed dramatically. This weir has been there for around 150 years.The ivy covered tree in the centre of the photo is the one in the previous photo, standing beside the deep pool. The pool has largely filled with boulders and finer coarse sediments. 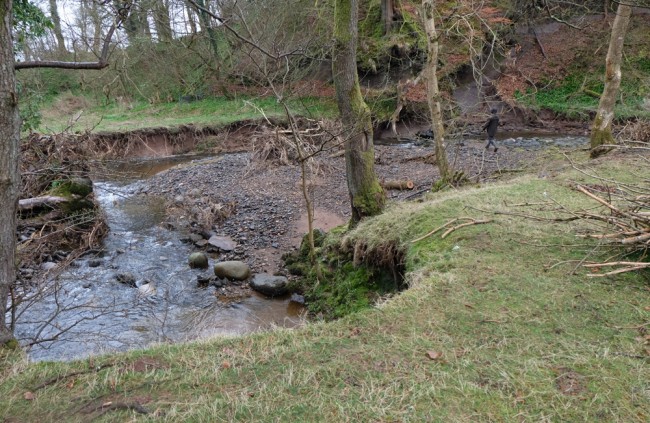 The extent of the damage can be seen in this photo. Although there has been massive erosion, so too there is great benefit with the weir now taken out of the equation. Muir can be seen walking across the buried weir. 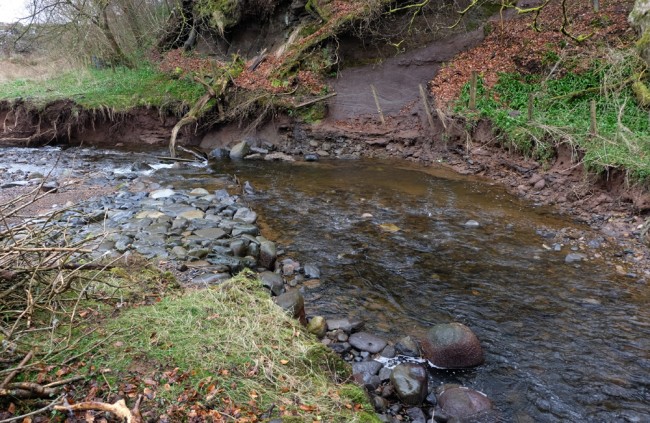 Th old timbers across the upper face of the weir have been exposed and the pool upstream has been scoured and the bed lowered. Tonnes of silt that smothered this pool above the weir has gone. The habitat upstream has improved and may continue to do so for some time.

The massive spates that came in November that damaged our green bank engineering efforts upstream have also wreaked havoc on the lower burn. The weir is no longer an obstacle as the high flows removed the massive trees on the right bank ripping them out and allowing the bank to disappear downstream. The weir is now buried under tonnes of cobbles and boulders that have deposited on the inside of the bend and a new channel has been cut around the weir. The heavily sedimented pool upstream of the weir has scoured and cleaned and is now a series of run/riffles and pol habitat but it’s clean for the first time in years.

Further upstream trees have fallen and blocked the burn, reverting the flow causing further erosion to some areas. Last April, Muir and I cleared a log jam that allowed tonnes of fine sediments backed up behind it to move. The Board then cleared some fallen timber during the summer. This area is unrecognisable today and is clean and diverse habitat offering fish cover instead of a bare featureless stretch. It is still essential to address the source of the silt upstream and we will discuss this further with the board shortly. Stopping the sediment input should return this to a diverse and productive habitat. 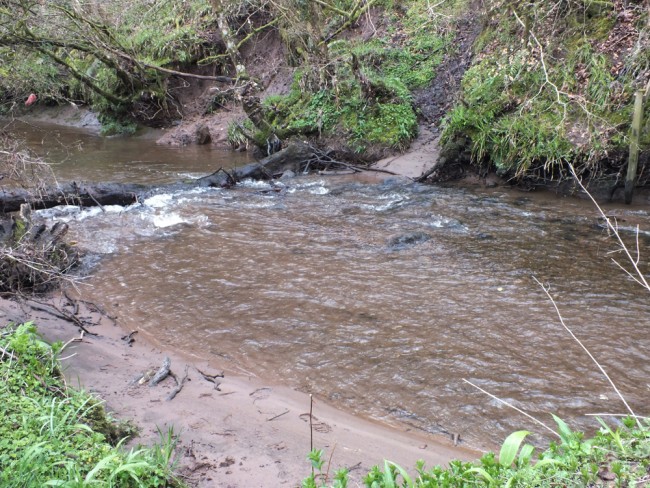 April 2015 just 10 minutes after Muir and I partially cleared a log jam and the sediment was beginning to move downstream and the flow pattern was changing upstream. Two or three days later it was much improved but there was still a fair bit of fine sediment on the bed. Compare this with the next image that I took today. 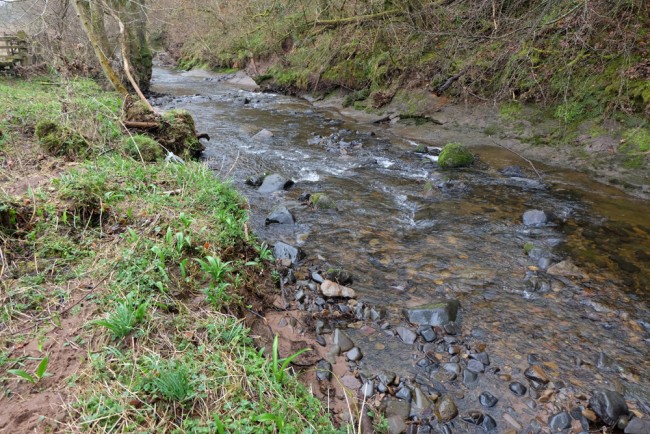 The same bit of river but the photo was taken about 10m further upstream. The board cut the fallen tree out last summer and spates over winter have really scoured and changed the bed and habitat for some distance up and downstream.

The force of nature is unstoppable and despite our efforts to stabilise erosion on one particular area of this burn, the huge spates overwinter have sorted some problems and created others. Downstream of the A77, the Board installed fencing about 10 years ago and this too has largely been damaged. The landowner is prepared to fence his boundaries but doesn’t intend to fence the water margins again without assistance. We will now consider what course of action we recommend to the DSFB for the immediate future.