Muir, Gordon and I were out electrofishing on the Cummock and Burnton Burns today and what a day we had for it. We left the office bathed in glorious October sunshine as we headed for the Cummock Burn a tributary of the Muck Water which enters the River Doon opposite Dalmellington Moss. Our first site was below Sillyhole Bridge and produced a mixture of trout and salmon fry as well as a handful of wonderfully shaped salmon parr. The fisherman in me can’t help but wonder if I might be fortunate enough to see these parr in their adult forms in a few years time. 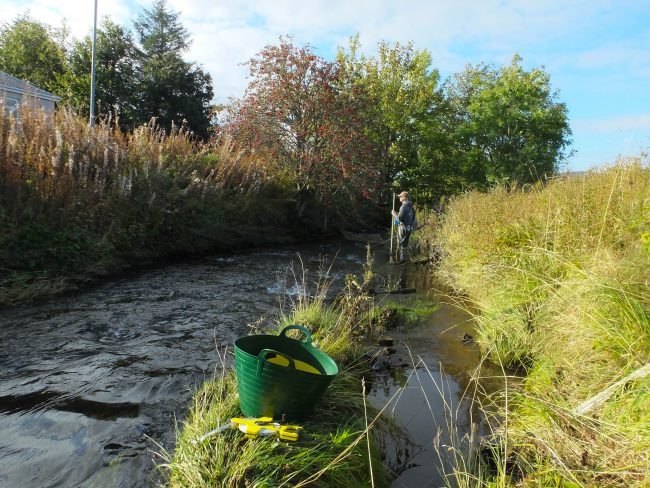 A collection salmon fry and parr from the Cummock Burn below Sillyhole Bridge.

Our next site was in the Burnton Burn (a tributary of the Cummock Burn), despite the burn’s modest size we have previously recorded salmon fry and parr here. This year in our survey site there were only trout, however that’s not say that salmon didn’t spawn in this burn last winter just that they weren’t present in our site. Salmon fry generally stick close to where they hatch (within a 100m or so), making locating low density populations difficult. 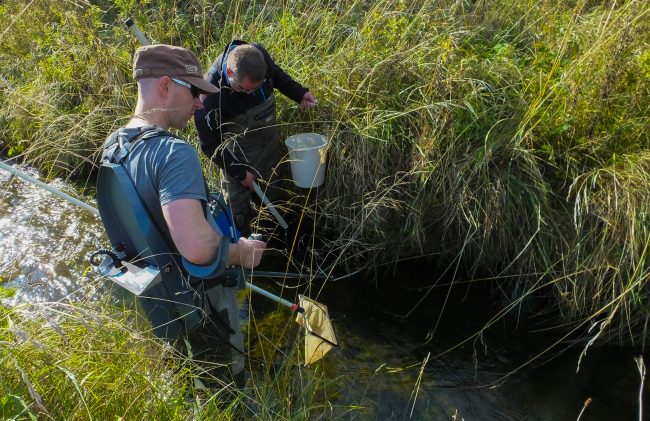 Muir (on the anode) and Gordon electrofishing the Burnton Burn

A fine collection of trout fry and a parr from the Burnton Burn.

We finished the day with two more sites on the Cummock Burn. Last years high water levels may have forced fish destined to spawn in the main stem into these tributaries in seek of lesser flows. These surveys help us develop a fuller understanding of where fish spawned last year, the numbers of fry that were produced as well as survival rates from one year to the next. And whilst we see fluctuations in numbers from one year to another the critical output is the number of smolts being produced. In a watercourse more fry won’t necessarily mean a greater smolt output as factors such as competition for resources between individuals may hamper growth rates.  A smaller population may mean less competition with increased growth rates the consequence (potentially) being larger more robust smolts being produced. Population dynamics are a complex business, fortunately nature usually has the means to compensate for environmental factors and millions of years of evolution make a pretty robust model. 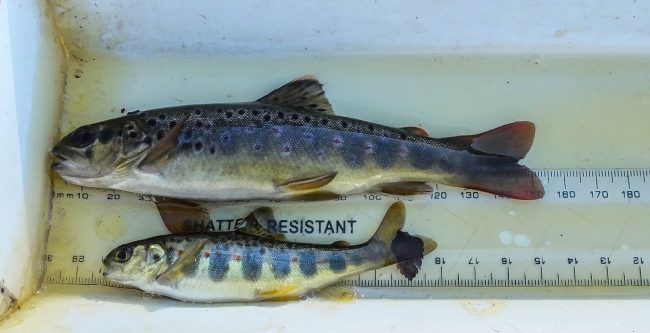 A trout and salmon parr from the Cummock Burn. The salmon parr (bottom) is a fantastic shape….the team never get tired of seeing fish like this.

← How to build a shed…. River Education Project gets underway on the Stinchar and Girvan. →