Volunteers help on the Girvan

Once again we relied on volunteers to assist with riverbank restoration on the Girvan. Without volunteers, the Trust is really pushed to deliver this type of work with our limited staff. Anyway, today we were assisted by two students and a staff member from SRUC, Riverside Campus. Sally Gray brought along Elidh and Danny, both Countryside managers to help with the work and I think they all enjoyed themselves. We couldn’t have achieve so much without their assistance so a big thanks from the Trust to them. 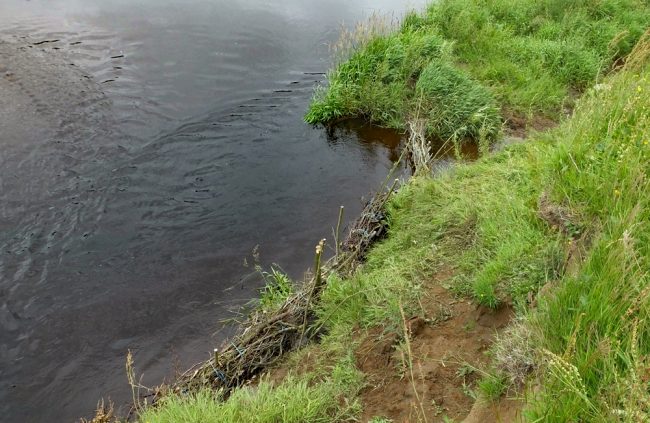 We started this morning where we left off last year. The fagots have to follow the toe of the bank to be compliant with CAR regulations so we made sure we did.

In the last week, ART staff put together about 40+ faggots made of brash from a felled woodland. If we hadn’t used it, it would have been burnt or left to decompose on site so either way, it has now been put to good use to stabilise severe erosion on the Girvan and will lock up carbon for some years ahead. Bank stabilisation using ‘green’ technologies are a much more environmentally friendly way to address erosion problems on rivers and are more likely to be supported by SEPA in preference to the old solutions involving rock armour, gabon baskets and levies that are no longer in favour unless of course there’s real justification. This severe erosion that has long impacted the middle reaches of the Girvan and downstream occurs as a direct result of morphological changes that were made to the river over 200 years ago when manual labour was used to straighten and reroute the river, presumably to improve agriculture on the flood plain. We can still see signs of the meanders on the floodplain in some satellite and drone imagery and levies occur along much on the mainstem. The river is really only trying to remainder as it once did naturally and so while leaving it to do so may be an option, the problems lie with the loss of agricultural land and the silt and soil that would be lost downstream ruining spawning gravels and adding nutrients, (particularly phosphates) that can reduce water quality for many years. This really isn’t an option so we are looking to find acceptable solutions.

In 2011, Brain Shaw and I visited these 2 sites to see if we could suggest solutions that the estate could achieve without too great an expense (I’ll try to find some photos taken then). SEPA were also in attendance and it was agreed, the worst erosion point could have tree butts and root wads added into the bank to help stabile the bank. This was performed by a local contractor the following year under a CAR licence and while it may have helped to some extent, it didn’t solve the problem entirely as there was only a small section tackled due to the cost. Another contributing factor is livestock that have free access to the banks and sheep in particular have been detrimental to bank stability. As part of this project, both erosion points will be fenced to exclude livestock.

Since 2012 the banks have continued to crumble and some of the trees trunks washed out and are now stuck midstream. We needed a better solution and ART suggested we try willow spilling and planting on the eroding sections (all performed under the CAR licence. Last April along with another group of volunteers, we set about trialling willow spilling and willow faggots to compare results. Both have worked well and erosion has ceased at both and a considerable volume of silt and fine sediment has built up behind the willow bundles at the upper stretch.

Todays work of installing brash fagots was a continuation of last years willow faggots. The section we worked on today eroded baldly last winter so we decided to extend our efforts only this time using brash bundles. We built them at least 2 faggots high today and in the worst areas, two layers deep. They were staked in with a combination of willow and hardwood stakes cut from waste. 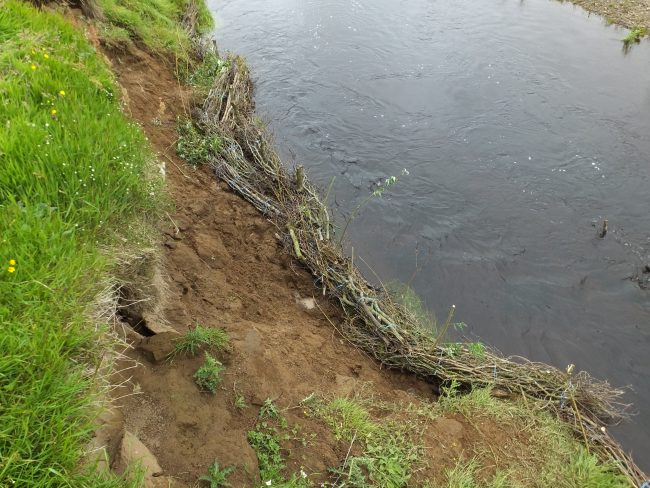 At the worst points, we place the faggots, 2 high and 2 deep. They should trap silt washing downstream in suspension and hold the bank behind in place. We know from last years experiment that we can build 14+” using an 8″ faggot so building these bundles 2 high should allow even more accretion from the sediment loaded river. 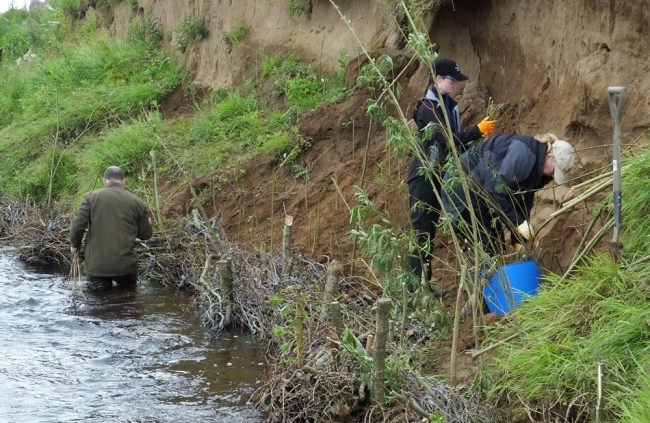 Elidh and Sally planting hundred of cuttings they prepared earlier. If a fraction of them take there will be enough to do the job we are aiming for. If they all take, we will have a great source for future willow harvesting and perhaps some experimental large woody debris laying in time. You can see we are using a combination of cuttings ranging from 12″ to about 6′. We also added willow cutting to help hold the brash bundles in place and to ensure there was a living structure that would be resistant to high water floods in years to come.

The willow we hope will root and ensure there’s plenty of buffering branches to reduce the force of the water on the bank. The branches that develop will provide shade and cover for fish, and the roots that trail on the water will provide refuge from predators when they enter a pool. Sally and Elidh cut a bucket load of willow cuttings while Danny, Struan, Muir and myself placed and staked the faggots into the toe of the bank. Once we had finished, staking, the cuttings were planted across the entire area. We also planted some tall cuttings about 4 -6′ long that we know should root fine and give height quickly. 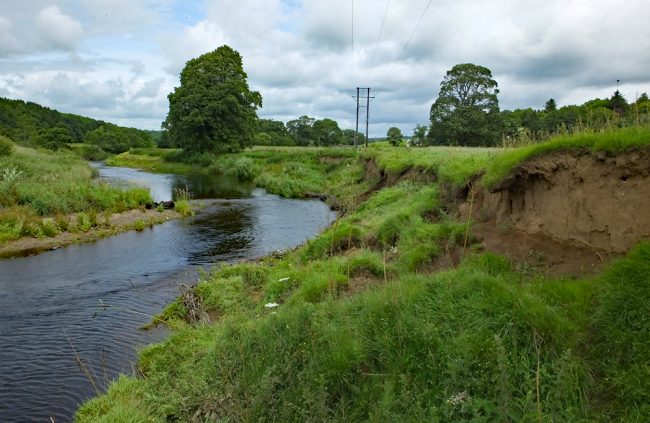 Here’s the view from downstream after we finished working on this section at lunchtime. A job well done and we just need to give it time to establish over the next few years.

The entire work took us until early afternoon when we then decided to add more willow where we had left off last year with the spilling at the erosion downstream. This spilling had been heavily grazed by sheep earlier this year but now that they are off this land, they are again doing well. Roots can be seen trailing in the water from the spilling and there not a bit of erosion taken place here since we installed it last April. Muir and Struan added some 7 -8′ willow poles we cut earlier in April and they are now doing very well. This was a bit experimental (as this entire site is really) and we are sure they will offer an good alternative in deep water situations.  We could do with a few more brash bundles to stake into the bank behind these willows but we will get to that eventually. Today we added a few more thin willow cutting extending this section by another 12′ and we will watch to see how these do. 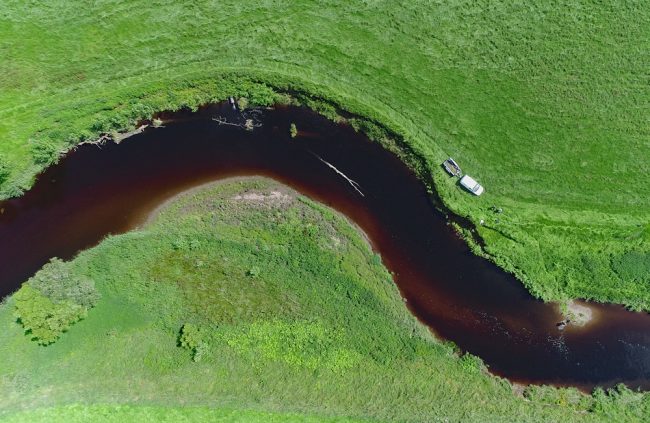 An aerial shot showing the erosion in the lower site. The flow is from left to right and we’ve worked extensively on the left bank in the lower section. The trees that were added in 2012 can be seen including some that have dislodged into mid stream. Not an ideal situation for angling, but I’m sure the fish won’t mind. The willow spilling and planted poles are on the bank downstream of the van and can be seen if you look closely. 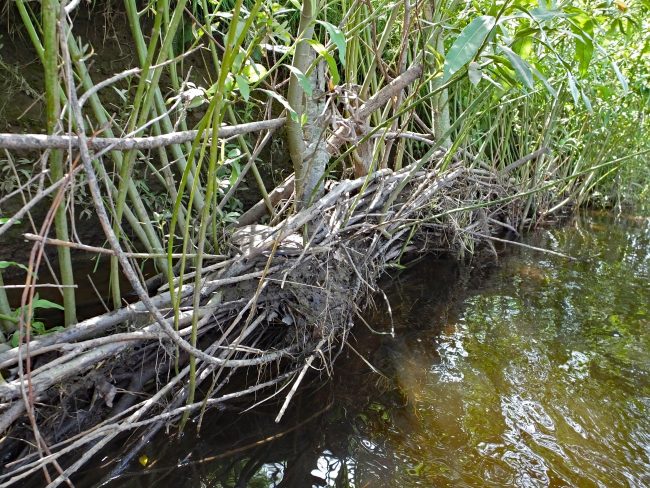 A close up of the willow spilling installed on the 19th April 2016. 1 year and 2+ months ago and the results are really encouraging. Roots can be seen trailing in the water and branches are beginning to grow over the tail of the pool. The solid behind is stable and hasn’t eroded since the sheep were taken off earlier this year. Excluding livestock is essential to success. 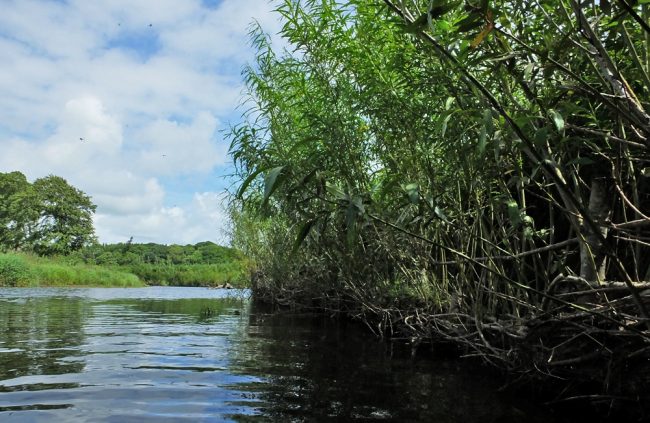 Another view of the spilling after just over a year. It is obvious by now that this glide at the tail of the pool will be a favourite trout habitat once these branches develop more. 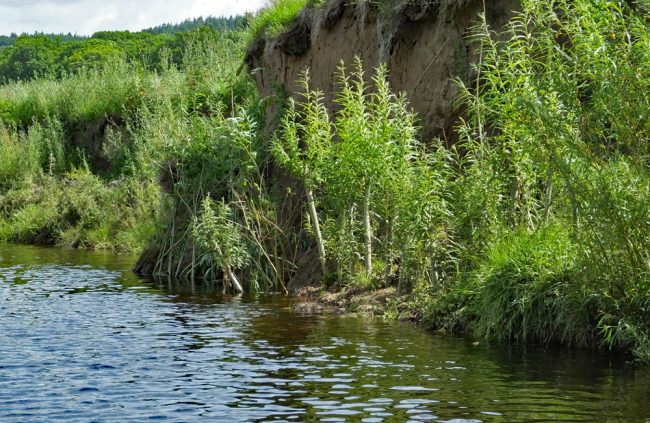 6 – 8″ willow pole cuttings that we drove into the toe of the bank beside very deep water. More of these poles is in the soil than above. After just 3 months, they are trailing roots in the water (those that were planted in water at least) and developing lots of new shoots which by next year should reach over 6′. These poles were experimental but we will be using them in future for sure.

I’m quite certain that in 4 – 5 years time, these two banks will be stable and covered in foliage. The pools should have better fish cover and greater fish populations and sediment heading downstream from here will be a thing of the past.

We may make the odd mistake and have an occasional failure, but on the whole, we are making leaps and bound in developing and understanding what works best and is most cost effective. ART take these jobs on to demonstrate to anglers, owners and clubs how they may improve their own beats. Anyone wanting to do something similar or advice on how to approach this can give us a call in the office where we would be very please to discuss this with you and help where we can.