On the way back up the Girvan catchment yesterday, we stopped in the middle reaches to check progress of our green bank engineering that was installed in April 2016.  This area of the Girvan contributed tonnes of silt and fine sediment to the river each year and had a huge impact on fish spawning habitat and juvenile production. Water quality suffered from sediment and nutrient inputs. Historically, the river had been straightened and levied 100 – 150 years ago to allow improvements for agriculture. Restoration and re-meandering wasn’t an option and costs would have been astronomical. Straightened rivers will re meander in time if they can but that can take centuries and lead to terrible diffuse pollution issues (exactly what was occurring here). Doing nothing wasn’t an option at this site as the sediment input was destroying downstream habitat and reducing water quality. The fish population was suffering.

We first advised on possible solutions in 2011 when the landowners were increasing concerned over the loss of prime land and alluvial soils. We suggested then that root wads and large woody debris may be the solution. In 2014, a contractor was engaged and installed full trees into a small section of the lower eroding bank. Cost prevented treatment of the full area and erosion continued. Some of the installed trees washed out in spates and it was obvious that further work was necessary, with little or no budget. 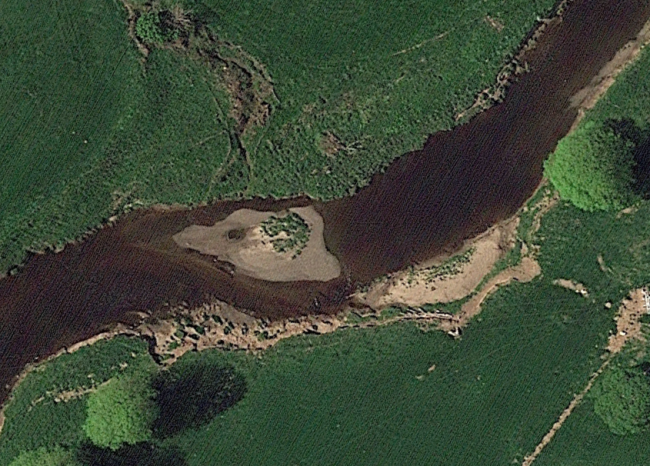 An aerial image of the upper most erosion from before our work commenced.This could only be described as severe. 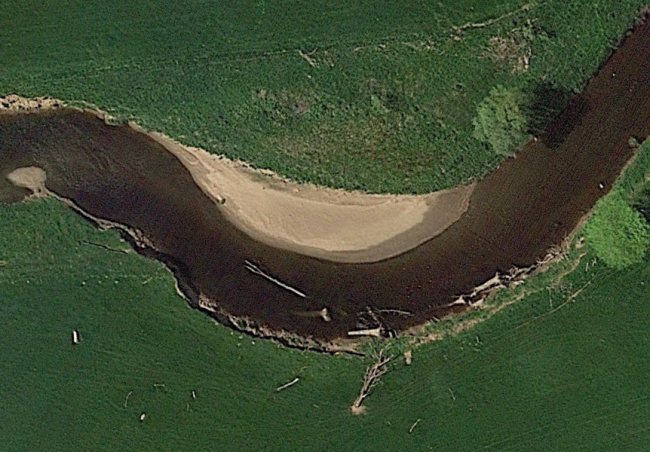 The lower site after contractors installed woody debris. While this helped to slow erosion, it partially failed with large trees washing out in winter spates (as can be seen in this image). This was the situation we started with in 2016.

ART secured funding from North Carrick Community Benefit Fund, D’Oyly Carte Charitable Fund, Girvan Salmon Fishery Board, Patagonia World Trout Initiative and the landowner in the  from committment to fence off the two erosion scars (a total of approximately 220 – 250m of fencing). Our solutions were in some ways experimental although we did use willow spiling, a tried and proven technique over a 30m length of bank. Other techniques we used included staking brash bundles along the toe of the bank, willow facines, constructing living fences (fedges) and a lot of common sense. We were supported by enthusiastic volunteers including anglers, SEPA restoration specialists and students, all keen to learn new techniques. 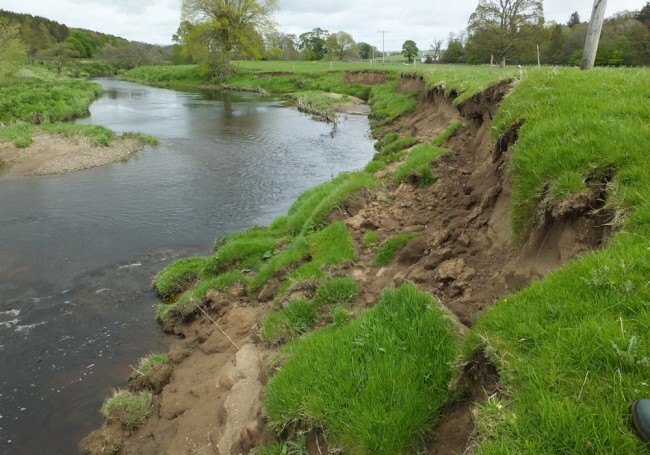 Looking upstream at the upper site in 2015. There were obviously severe problems to address.

A combination of trees and root balls were used in an attempt to stop the erosion at this point. This is the lower site early in 2015.

Our work commenced in April 2016 with the installation of willow spiling and a few facines. Spiling was woven into the lower section where a high bank was eroding at a rapid rate. Willow facines (willow brash bundled and bound into a woody ‘sausage’) were staked into the upper most section where sediment build up had commenced after anglers had constructed a short stretch of hazel spiling. Unfortunately Hazel doesn’t root and their spiling was already dead and collapsing. We used fascines here as we didn’t have enough material to install willow spiling over the entire site. As it turned out, spiling is just one method and our creative solution using facines is another that we will used again and again. This technique worked every bit as well as spiling. It was a learning process for everyone involved.

One year after we started work and things looked promising until sheep grazed the site and stripped most of the vegetation off the surface leaving it a barren wasteland. This was a real set back to our work. Our willow facines were cropped hard and planted cuttings were eaten. We went back to the landowner and pushed for the fencing…an essential component for success. Excluding livestock a must! In spring 2018, the fences were erected but only along the bank top. There was concern that spates would rip out any fencing from the top of the levy to the water’s edge. We installed willow fedges (living fences) made from stakes cut from live willow and interwoven branches to link the fences to the river. A lattice of willow cuttings effectively. We hoped these would root and withstand spate conditions; time will tell. We also used hardwood brash and old fence stabs to create leaky barriers (hurdles) where the fences ran below mature trees…not ideal conditions for rooting willow so hurdles seemed a sensible alternative. So far, all seem to have done the job well but they have yet to withstand a winter’s spates.

The difference between 2016 and now is night and day. Erosion has all but ceased and banks are building. Sediment suspended in the water (from erosion upstream) becomes trapped behind the willow growing from the fascines and spiling. This accumulated material soon adds inches to eroded banks. 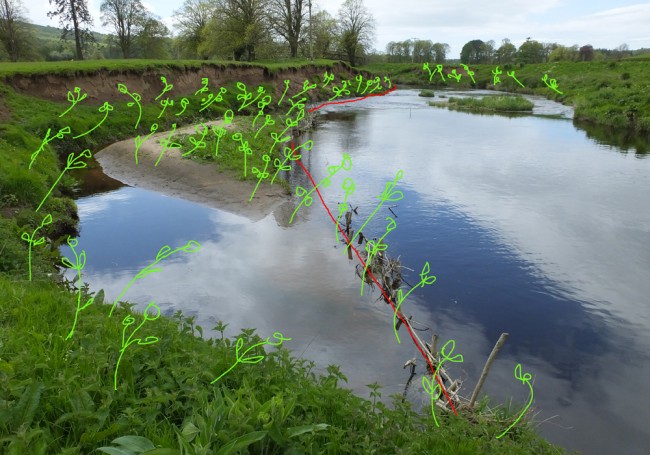 Our original concept sketch for the upper erosion. 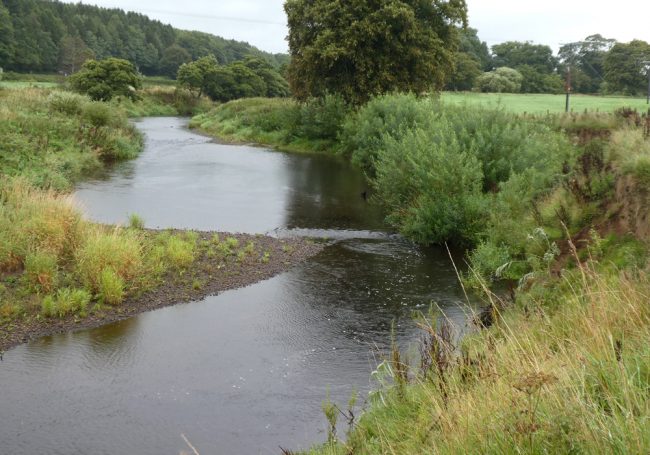 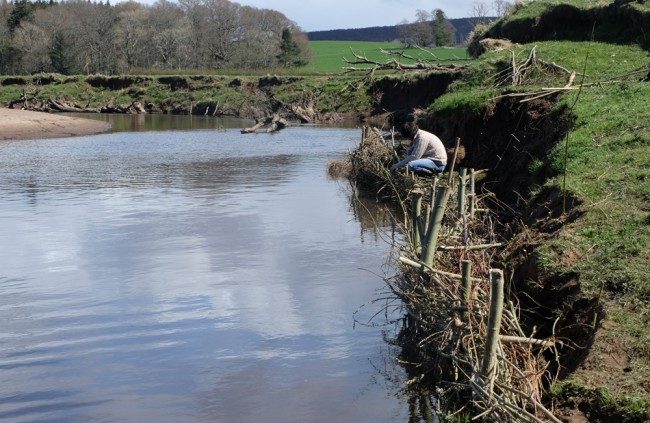 Installing willow spilling in April 2016 at the lower site 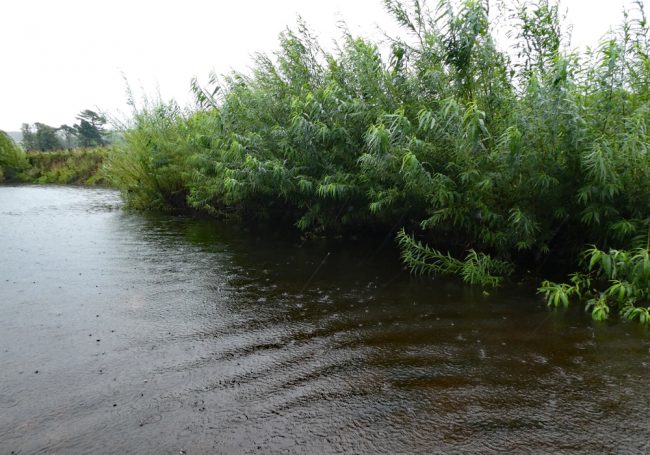 The willow spiling 2 years and 5 months after installation. What a transformation! 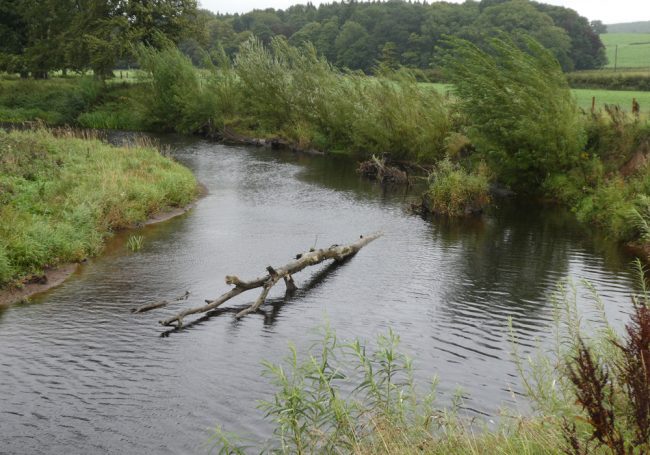 The tree is still lodged mid stream 3+ years on but the banks are stable and erosion has halted. Fish habitat has improved 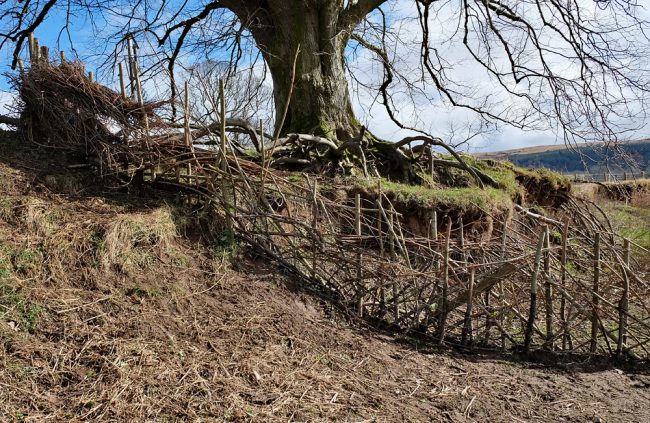 Installing a ‘fedge’ at the upper site to link traditional fencing to the river.Effectively this is a leaky barrier constructed largely from living willow stakes and brash, designed to withstand floods.

That’s the bonus of these techniques as the prime aim was to stop erosion. Just imagine how much sediment could be removed from suspension if other erosion areas were addressed using these methods. Green Bank Engineering  has to be an option for landowners facing similar problems on this and other rivers and we would encourage anyone seeking help or advice to get in touch with us as we can help.

This approach can be described as an eco system service (buzz words we hear frequently from some sectors) as it benefits not just water quality and fish but wildlife and biodiversity generally. We’ve seen lots of farmland birds using this habitat and expect it provides excellent food source and nest sites too. Apart from that, it prevents land loss and for hard pressed farmers, that’s got to be beneficial.

Judge for yourself. The photos really do illustrate the progress that’s been made.