After another breakdown with the electrofishing set (it’s the anode that’s causing problems), Gordon and I stopped on the way back to the office to look at Stair Dam. We didn’t really expect any rise in water and there wasn’t one so we shouldn’t have been disappointed (but were a bit as we, like all the anglers in Ayrshire are itching for a cast at fresh fish).

There was a terrific rise underway in the pool above the dam. Trout, and we suspect a few sea trout were taking stoneflies as they hatched on the surface. The surface was dimpled all the way across the width of the river over the lower third of the pool. We watched closely as some very decent fish were moving close to the right bank. The largest we saw was well  over 3lbs and Gordon was fairly sure it was a sea trout. I saw a couple of smaller fish further upstream leaping clear of the water and they looked very silvery to me. There are often trout to be seen, rising in this pool but today was exceptional. 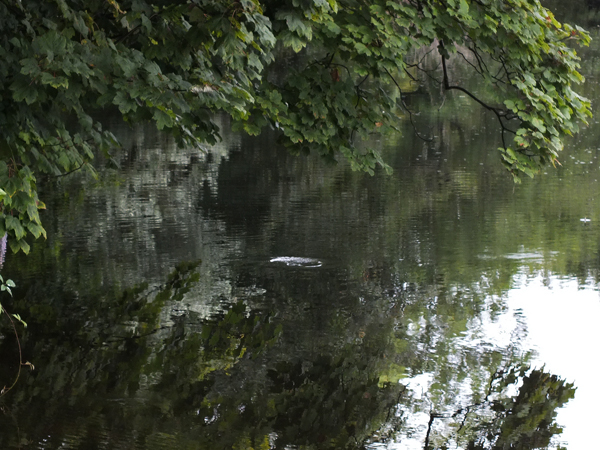 A good trout rising below the trees

I often wonder why a few clubs feel the need to stock trout on the Ayr. We know there are reasonably good numbers of wild trout in the pools and a good stock of fry and parr in the burns but a 3lbs fish would be a really good catch. I suspect that the stocking that goes on is is to meet the demand for larger fish than are normally encountered on the river. There are plenty of still waters that can cater for those wanting to catch bigger fish. Big stockies will scoff lots of fry as they struggle to survive in the river and may do a lot of damage to our native stocks. I know that this may not be a popular opinion but speaking from experience, I have caught a stocked trout of over 7 lbs on the Ayr a few  years ago and it was never going to survive on invertebrates alone. Interestingly no club ever admitted to stocking fish of that size… and thankfully most expressed concern.