What to do if you discover Pollution

What to do if you discover pollution?

Well I’ve been for a walk with the dogs today and I’m back home after discovering two burns polluted within the Water of Fail catchment. What should I do? I’ve listed the steps I intend to take to ensure that SEPA are made fully aware of the facts.

1. Take photos that illustrate the problem and the source if possible. (see below)
2. Report the incident to SEPA, using the pollution hotline number 0800 80 70 60.  As these pollution incidents appear to be long running issues, I’m going to wait until Monday before reporting them as I don’t want to call a SEPA officer out at the weekend unless it is a new and immediate threat to the river or fish.
3. On Monday morning, I will phone this into SEPA and provide details of what I saw and where and offer the photographs as supporting evidence. Grid references may be helpful but not everyone has a GPS or smart phone that is capable of pinpointing the exact location. Use www.streetmap.co.uk  to find the grid reference when you get home. The least you should do is provide an accurate description of where you saw the pollution.
4. Before you end the phone call, ask for an incident number. THIS IS IMPORTANT to ensure the call is logged and that you are provided with details of the action taken by SEPA.
5. Following the phone call, I’ll put everything down in writing in an email, attach the photos and send to the SEPA officer that I’ve been speaking to along with the incident number.
6. I’ll await a follow up call from SEPA to let me know what action is taken.
7. I’ll revisit the site periodically to ensure that whatever remedial action taken or suggested is effective and the pollution doesn’t recur.

8. This is an optional step but one that I’d encourage…. call ART and let us know what you found too. If we know about it we can keep an eye on it.

That’s what I’d recommend anyone does if they come across pollution. These simple steps should bring some sort of result and improvement.
The incidents I found today are not the first pollution incidents reported on these burns.

The first picture is of sewage fungus in Parkmill Burn at it’s source. ART staff previously discovered pollution at this location several years ago and spoke to the farmer about the problem. Things improved but it appears to be back as bad as ever. There really isn’t anyone else who could be responsible. Lets hope SEPA will intervene and bring about lasting results. 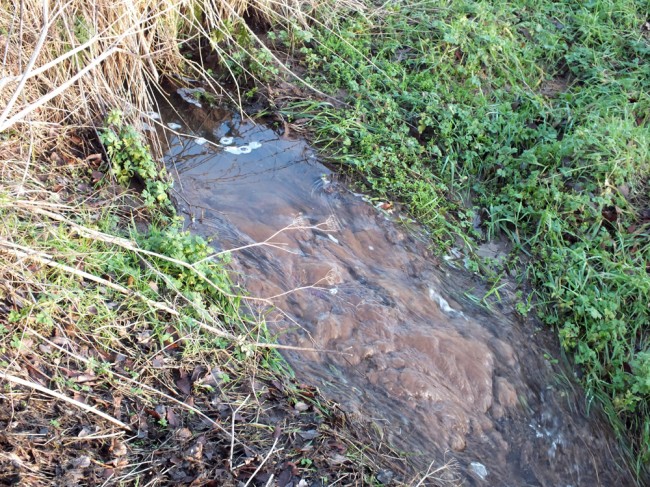 The source of the Parkmill Burn. Pollution is evident here as indicated by the sewage fungus coating the stream bed.

The second image is of sewage fungus in the Chalk River (aka Mauchline Burn). Previously there was a fish and invertebrate kill incident at this location which SEPA attended although no action was taken. On another occasion, ART reported raw sewage entering the burn in Mauchline town center. The source of the pollution that I came across today hasn’t been traced by ourselves but there aren’t many likely polluters above this point so lets hope someone can be identified this time. SRDP funding has been provided to two farmers on this short watercourse to improve slurry storage and fencing yet repeated incidents still occur and the fish population continues to suffer; in fact our last electro-fishing surveys failed to find any salmonids. 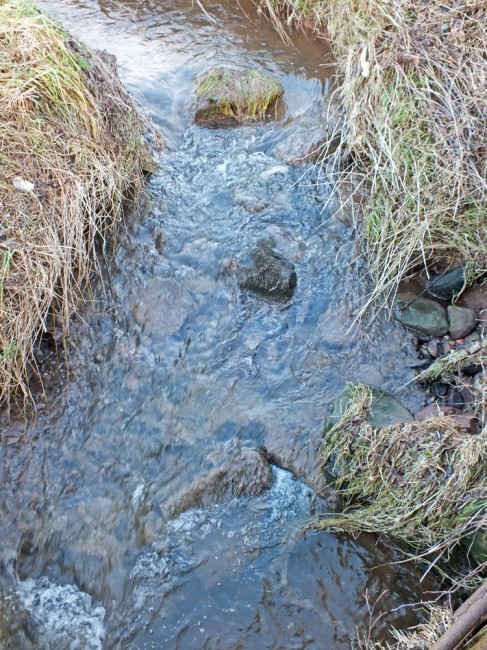 Several hundred meters downstream of the nearest farm and the whole of the stream bed is coated with sewage fungus. How far this extends is unknown at the time of writing.

The third image is also on the Yonderton Burn and although not pollution incident, unfenced burns with cattle access are typically degraded by diffuse pollution. Just imagine how much feces and silt could enter the burn at this point, especially on a rainy day as cattle gather at this point to be fed. Last year approx 1000 reared trout were killed by a rain driven ‘diffuse pollution’ incident on this burn further downstream! This was reported to SEPA. 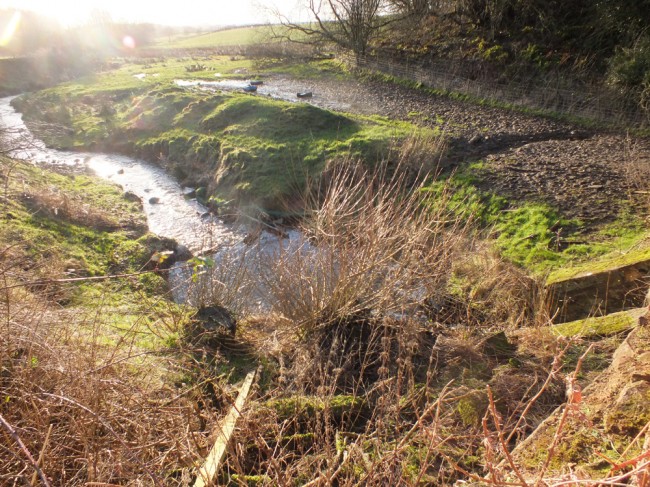 Is there any wonder that the Water of Fail water quality is so poor and the fish population consists mainly of pollution tolerant species such as minnows and stone loach?