More Pollution: Warning: not for the squemish Update on the work at Loch Doon

As part of the management project focusing on identifying migration and survival issues in the Doon catchment above Loch Doon dam, we were there this afternoon to capture salmon parr and pre smolts then insert Passive Integrated Transponders (PIT Tags). We would ideally have captured these salmon in a smolt trap but due to the logistical difficulties of attending a trap twice daily, and the remote, very public and vulnerable location, we felt it best to adopt a more familiar approach and used electrofishing. The main drawbacks of this method over the rotary screw or fyke net traps is the inability to assess the overall smolt output from the lanes and the exact time they leave the burns and head for the loch. However, as salmon alevins (as unfed fry) were stocked into Carrick Lane a couple of years ago from the Doon DSFB hatchery, and very few salmon are thought to currently access the lane, it is probable that the vast majority of these fish are the surviving juveniles from the last stocking. As we continue this tagging later this week, we will gain a better understanding of the survival success in this burn. The other lane we will be focussing on is the Garple where we know natural recruitment accounts for the fry and parr we find. We have already PIT tagged salmon there last autumn and will continue once we finish the work at Carrick Lane. 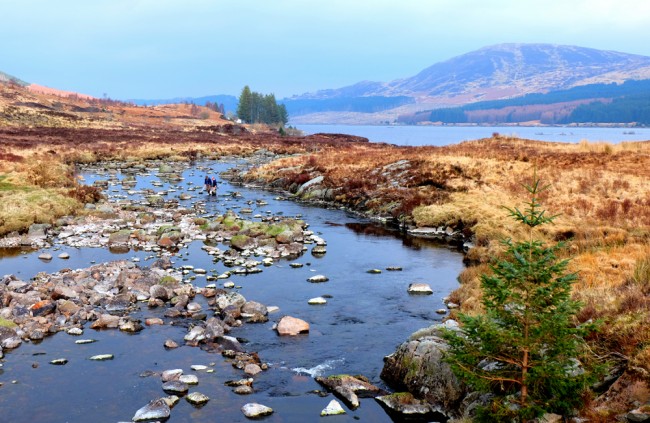 Once the fish become smolts (and it’s a bit early yet), they will descend into the loch and hopefully turn up in the PIT tag counter that is about to be installed into the salmon ladder where each fish will automatically be identified and recorded as it passes through the reader. It would be really useful to know when the smolts leave the burns as we could then establish how long it takes for them to reach the ladder (if in fact they do). We may attempt a fykke net trap for a week or two to see how that goes but I do have concerns that it may be tampered with.

We have plans to install smolt curtains at the dam to help guide the smolts towards the ladder intake but that may be postponed temporarily to see how the fish fare without any assistance first. The curtains are made and ready so can be installed later this year or next year depending on the results we see. It has long been suspected that the major issue that salmon face is finding the entrance to the ladder on their way downstream to the sea but there may be other issues too and we are looking at a number of things at the moment. 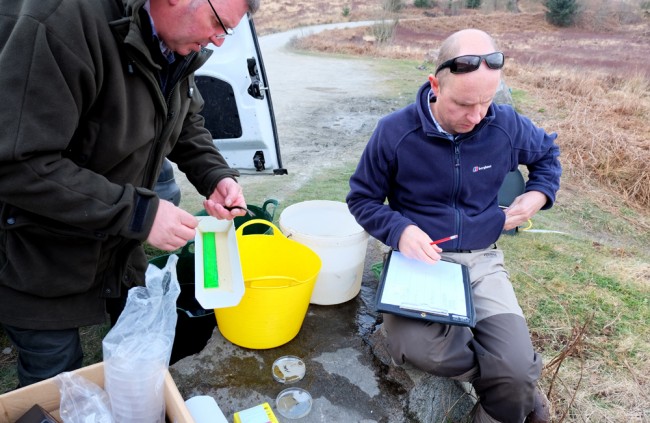 Carefully inserting the PIT tags into the body cavity of the fish. It requires a very small incision to allow a sterile PIT tag to be slipped inside. This is done carefully under anaesthetic and the fish recover quickly after their ordeal. 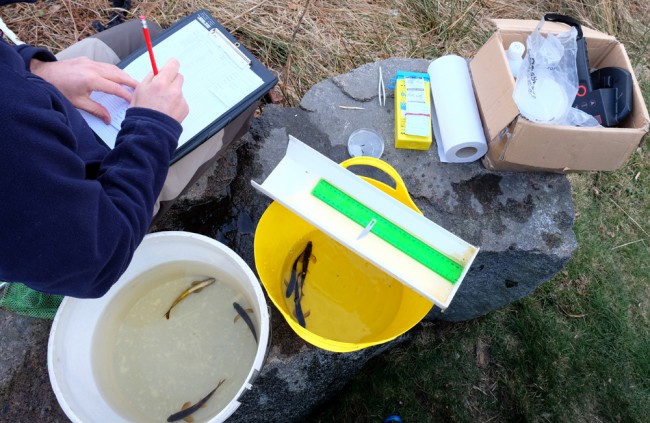 Once the tags are inserted, a scale sample is taken along with measurements and finally, the adipose fin is removed to enable easy identification should these fish be captured as adults. All the data recorded will help us to work out where migration is compromised. 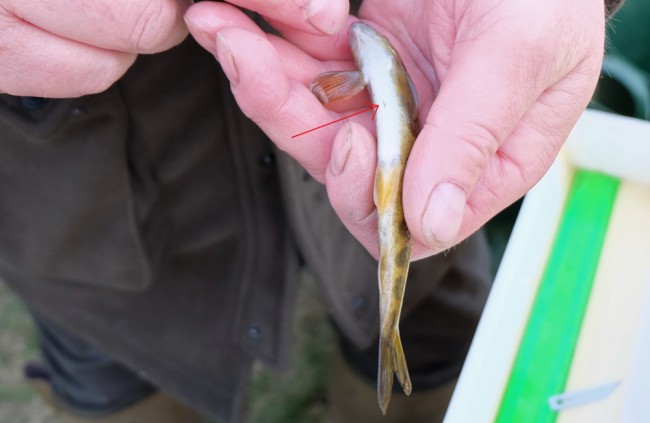 The arrow indicates the incision where a tiny PIT tag is slipped into the body cavity. This takes just a moment and the fish seem to recover well, none the worse for their ordeal. The incision is tiny and will heal very quickly. The tagsand scalpel are sterilised before use. Normally we wear latex gloves for this operation however my hands keep ripping them and we used anti bacterial sanitiser instead.

Muir and Struan electrofished as I prepared the PIT tags and other equipment. Each fish that was tagged was also scale sampled, measured and adipose fin clipped to help anglers identify these fish easily when they return as adults in 2017/18 as grilse (one sea  winter fish) or salmon (2 or more sea winter fish).

Although it is still legal to kill salmon on the Doon being a category 1 river, we can only hope that anglers catching a fin clipped salmon will release it to continue it’s journey back to the headwaters where it again will be recorded as it passes through the fish pass to the loch. We will ask the Doon DSFB to write informing Clubs and owners that fin clipped salmon should be released and I hope they will support this. 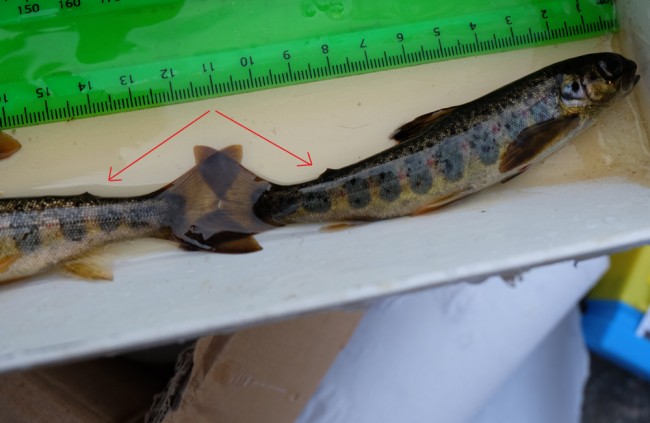 The arrows indicate the clipped adipose fins. We will encourage anglers to keep an eye out for any fin clipped adults as they are destined for Loch Doon.

We will be back to continue this work over the next week depending on weather so I’ll keep readers posted.