There are always lessons to learn from everything we do and while we’ve felt that we are making progress with controlling Giant Hogweed in Ayrshire, 2018 will go down as a difficult and disappointing year as for the first time since 2011, The Irvine and Garnock catchments haven’t been strategically controlled by ART due to a lack of available funding. This was  a bitter blow to the Trust as we know how quickly these rivers will revert back to their pre treatment days when they were widely infested with this plant in some areas. However, without funding, we can’t achieve anything and all that good work we delivered and investment we secured over the last few years looks threatened. We already have funding in place for control of this plant on the Garnock  in 2019 so it was particularly disappointing when our funding applications for 2018 were rejected.

The Trust has trained a lot of volunteers over the years in pesticide applications as this is generally a requirement of larger funders. It reassures them that there is a long term strategy that will take over when funding ceases. In an ideal world, that should work but reality is often different from theory and there are plenty of trained individuals that have never used the equipment supplied or training provided for the purpose it was designed for. That said, the Stewarton Woodlands Action Group  have always been proactive and have targeted Giant Hogweed on the Annick Water around Stewarton once again. Other individuals have also been out and we are grateful for all their efforts but far fewer than necessary to maintain effective control. This isn’t a strategy I’d rely on in future.

On the Ayr, we reverted to controlling Giant Hogweed predominantly in house this year due to a shortfall in funding.  This did however, push the staff back to the front line and with a critical eye on results. We are noticing some rather confusing results after more than 10 years of control on this river. With this a drought year, control is challenged and plant responses to chemical may be significantly impacted/comprimised by the weather. What is obvious is that there are burning questions that need answered. We’ve sprayed all plants that we’ve seen of all ages. Several weeks after initial treatment and we are finding  inconsistent results. Some plants appear to be dying with seed heads and flowers turning brown as expected. Others have yellowed but continued to grow and flower without any other signs of wilting. In younger plants, we’ve noticed that some leaves have died off and others haven’t, even on the same plant. That response from a systemic herbicide is difficult to explain. On other plants, we are finding new shoots emerging from the root despite dead leaves and stems lying on the ground from earlier treatments. Clearly, the chemical isn’t killing all the plants it’s used on. The results are inconsistent between year classes. 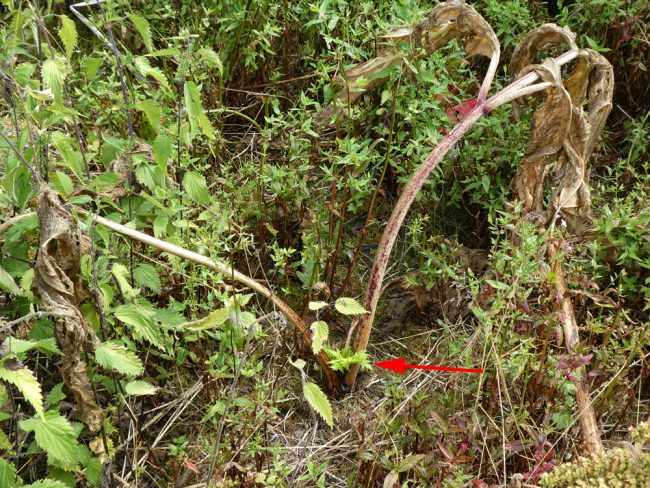 Sprayed and left for dead…but regrowth is emmerging just 4 – 5 weeks later. This root is alive at this point in time and I suspect it will throw up new leaves next year. That’s a disappointing and worrying response to a systemic herbicide.

Additionally, and this has long been a concern of mine, when total control of all flowering and juvenile plants appears successful, how then can we explain a rash of flowering plants developing on the same site in the following year? Something doesn’t add up. If the plants are all dead, then at worst, we should see immature juvenile plants germinate the following year but no flowering plants. 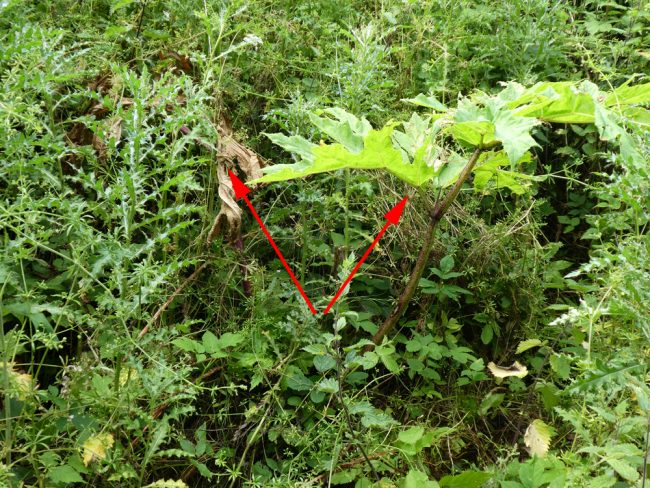 2 leaves on the same immature plant. One dead from contact with herbicide and the other thriving. This response following the use of a systemic weedkiller is concerning.

Giant Hogweed is monocarpic. It generally has a 4 year lifecycle and dies after flowering. So how, if we kill mature and juvenile plants on a site, how can there be flowering plants on the same site the following year? There’s only one answer to this and today I have proof that I’m correct…Glyphosate doesn’t always kill the root. We saw new shoots emerging from plants that appeared to have withered and died. Now this may mean a total rethink of the strategy that we and most others controlling this plant adopt. 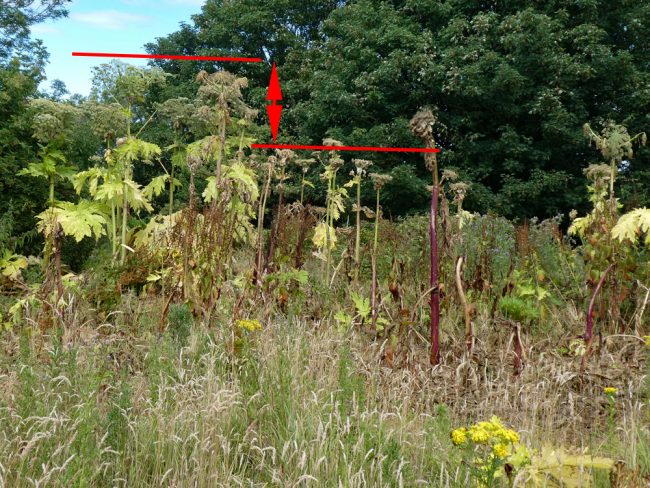 Giant Hogweed plants illustrating different responses to chemical treatment. All plants were sprayed about 1 month ago using the same dosage. Three weeks later, the plants on the left were found to be still flowering and growing while those on the right were apparently dying off. They were resprayed. None were particularly shaded so explaining the difference in response is difficult. Perhaps factors such as soil moisture have an effect?

With the exception of the Tweed Forum, I suspect ART has as much experience in controlling Giant Hogweed as anyone in the Country. Concerned by the situation we are facing, I called Luke Commings at the Tweed Forum this afternoon to discuss the results. After a brief chat with Luke, I spoke to Emily who is their Invasive Species Officer. Emily confirmed she was experiencing similar and inexplicable results.

I then called Monsanto Technical support. I posed several questions and points to Barrie Hunt, their technical guru and he did his best to explain the plant reactions we are seeing although I’m left in no doubt that some were rather confusing to him too. We’ve agreed to send on photographs and details to Monsanto and will probably meet with Barrie on site to examine plants and roots as we try to work out exactly how best to continue our eradication aims although I fully expect to be suitably amending our strategy for future years once we have worked out how best to proceed. Monsanto value our input and are keen to engage with hands on practitioners involved in control of this and other difficult  to eradicate species. I’ve always felt that ART’s experience and expertise placed us at the forefront of developing invasive species control since our days involved as partners in the EU INTERREG CIRB project with Queens University, Belfast and other 3 other Scottish Fisheries Trusts. Back then I was encouraging the trail and development of root treatments for Japanese Knotweed and today Barrie revealed that research is underway on this very subject in Wales. If only the Microscopic root analysis that was planned for that project had been delivered, I think we would have been much further along the lines of developing effective control measures by now.

Despite our apparent disappointment with aspects of Giant Hogweed control, there’s no doubt we’ve significantly reduced this plant’s density and frequency on the Ayr catchment in over 10 years of control. We were achieving similar results elsewhere until funding stalled progress. Similarly, the Tweed forum has achieved similar success but like us are struggling with particularly heavily infested sites. As ever, questioning results rather than accepting them is essential to ensure we stay ahead of the game. We will keep readers posted and advise on future strategy as soon as we’ve developed a plan for the final stages in our eradication ambitions. Perhaps the set back on the Garnock and Irvine won’t be as devastating as we first feared, particularly should we find a more effective approach to controlling this nuisance and dangerous plant. 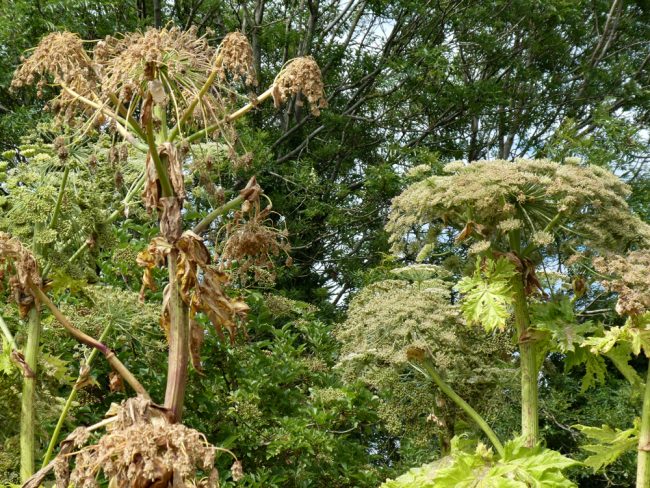 Different responses in the flowers and seed development. Are these seeds viable even after 2 applications of herbicide?