We achieve our objectives by providing advice, carrying out research, and practical skills to protect and enhance the freshwater rivers and their surrounding habitat.

Click on the tabs to reveal more about our work:

The maps show the areas in which we cover and the 6 main rivers in which we focus our work on:
Garnock, Irvine, Ayr, Doon, Girvan and Stinchar. 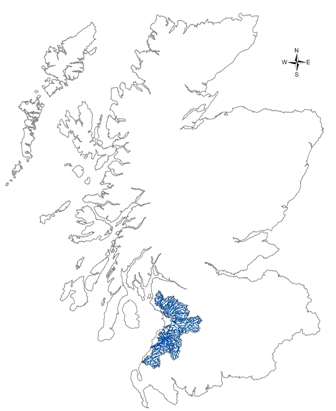 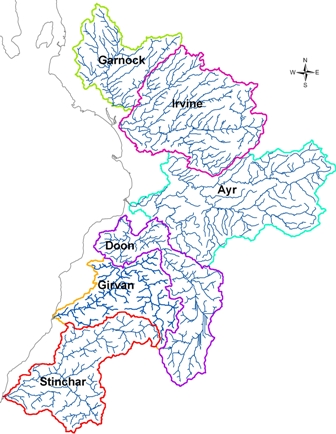 ART strive to improve Ayrshire’s riparian biodiversity, which would be impossible without the addition of ongoing research.

ART have been concerned by poor salmon recruitment on the River Ayr and River Doon for some time following successively poor electrofishing survey results.  This led to subsequent salmon egg survival trials in winter 2010/11 and winter 2012/13 (results of which can be found in the downloads tab above), which highlighted problem areas in each catchment.

The Trust also tackles research into invasive weed control, looking into different treatment options to assess the success or each along with the degree of native plant re-population in areas previously densely infested by invasive weeds.

Scale samples are collected whilst out electrofishing, allowing the age  and growth rates of  donor fish to be  established.  ART have also undertaken genetic sampling of Ayrshire’s salmon populations across each river, and run smolt traps to ascertain the proportion return on stocked sea trout.

In an area like Ayrshire with its high human population density, intensive agriculture and industrial base there is a high likleihood that human activities will have a detrimental impact on water quality and riparian habitats.

Some of the most obvious issues are barriers to fish migration such as the many redundant weirs which were formerly used to tap the power availble from our rivers and burns. Although most of these weirs are redundant many present an impassable obstruction to upstream migrating salmon and trout, even eels although they are capable of taking an overland route to circumvent barriers. Survey work carried out by the Trust has identified most of these barriers, although we suspect not all. Identification of measures to provide fish passes or remove barriers is an important role for the Trust.

One of the most significant causes of habitat degradation in Ayrshire is overgrazing along the edge of watercourses. Excessive grazing pressure can result in a complete loss of vegetation cover and the input of high silt and faecal bacterial loadings. This not only has a negative impact on the immediate watercourse but also for a considerable distance downstream. Low level inputs such as these are termed diffuse pollution and cummulatively they can have a major impact on river quality.

The Trust has implemented a number of habitat restoration projects designed to reduce the impact of diffuse pollution. Pre and post monitoring has shown that rapid improvments in water quality,

High quality invertebrate and fish populations can be achieved in the most heavily impacted areas with care and consideration for the aquatic environment in day to day affairs.

ART provide guidance and advice to District Salmon Fishery Boards (DFSBs), angling clubs and riparian owners based on sound scientific research.  ART work with the boards to improve catch and release rates on the rivers for the benefit of recruitment and ultimately increase the numbers of returning adult salmonids for the benefit of anglers and owners to improve available habitat for fish across Ayrshire.

From 2005-2012 ART ran a project that was a local favourite , Salmon in the Classroom.  The project was aimed at primary school pupils, teaching them about different aspects of the freshwater environment by providing each class with 100 salmon eggs to rear in the school.  Once hatched, the ‘alevins’ were released to the local rivers and children had a shot of ‘bug hunting’.  Later in the season, all classes returned to the same area of water that they had released the alevins to observe an electrofishing demonstration by ART staff, allowing pupils to see their salmon as fry as well as other species close up (and even touch them once anaesthetised!).

ART trialled a new education project, Wonderful World of Water, in summer 2012.  The project was again aimed at primary school pupils, teaching them about different animals that use the watercourse (Invertebrates, fish and mammals) as well as teaching them the age-old skill of fly fishing.

Unfortunately due to difficulties in securing funding, neither project was able to run in 2013.  Watch this space for educational projects in 2014.

Much of the Trust staff time is taken up with monitoring out in the field using a variety of techniques.

Invasive weeds have been an important project focus for a number of years now. Invasive weeds surveys were completed on all six main rivers in Ayrshire in summer 2009.  This subsequently guided strategic control efforts, and was followed up by a surveys along a number of major water courses in 2012. The control of Giant Hogweed is showing a significant reduction in its density to date, with significant native plant re-growth following pesticide treatment.

One of our core activities is electrofishing to sample fish populations. Electrofishing is carried out between June and Oct when water temperatures and levels are most suitable. Timed electrofishing to establish salmon fry numbers in the main stem of the larger rivers are completed annually, providing an invaluable time series. We also carry out routine electrofishing for the Ayrshire salmon fishery boards as well as consultancy work for developments such as road upgrades, windfarms, coal mines etc.

Scale samples are collected whilst out electrofishing. Scale reading allows the age  and growth rates of  donor fish to be established.

The Trust is also involved with monitoring of a range of biodiversity including freshwater pearl mussels and water voles.