Work is now well underway on the project to improve fish passage at the two weirs upstream of Girvan, known locally as the Girvan Dykes.

The weirs have long been known as an obstacle to migrating salmonids and are mentioned in “The Salmon Rivers and Loch of Scotland” (W.L. Calderwood, 1909) as follows:

“This introduces the subject of the obstructive dam-dykes of the river which, under normal conditions of water flow, act as a serious hindrance to the proper recovery of this river…. The lowest on the river is not very far out of the town of Girvan. At what are known as the Bridge Mills two dams occur, but the lower one is a subsidiary structure erected for the benefit of the fish, on the advice of Buckland and Young. It forms a good pool below the main weir, but none the less the two dykes form a material obstruction to ascending fish for contrary to the requirements of the Salmon Acts, no fish pass is on either.”

We had hoped to have the new fish passes installed by 2009, to mark the centenary of Calderwood’s words but that was not possible.

The fish passes are a simple design, consisting of a notch in the crest of the weir and side baulks to maintain an adequate depth of water to allow fish passage at lower flows than previously possible.

The works are being undertaken by JJL Groundworks and good progress has been made with the upper weir. It looks like we may be lucky and miss most of the forecast rain. 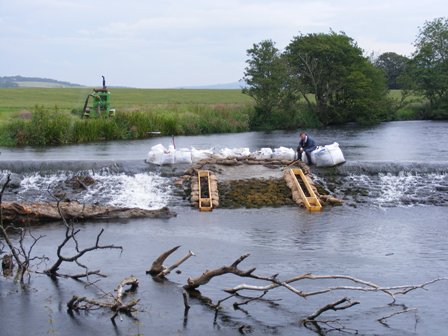 Thanks to the SEPA Restoration fund, FMC Biopolymer, Girvan DSFB and others for funding this project.