How porous are the Burnawn’s obstacles?

Given the ongoing development of the Burnawn fish pass at Cemetery Bridge, I thought it advisable to gather some data on the salmon population upstream of the bridge.

No stocking has taken place on the Burnawn for a year or two so any salmon upstream of the fish pass must be as a result of natural spawning in 2010/11 or 2011/12. Assisted by Gary and Jake from Galston, I electrofished just a short distance upstream of Cemetery Bridge. 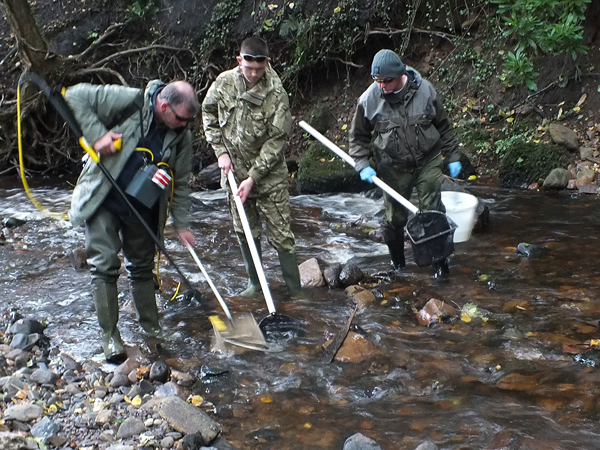 We caught a few trout but more importantly the catch was dominated by salmon fry and parr (34 salmon in total) The next obstacle upstream is another bridge apron where Galston AC built another fish pass but sadly  they ran out of timber (see yesterday’s post for a photo) and it’s a bit short. But… the burning question in my mind was ‘have salmon made it up this pass?’ We headed to a nice looking rifle and pool a couple of hundred yards upstream and set about fishing.

Again we caught salmon (14). Trout were dominant but at least this proved that salmon can access upstream of the road. Now I think this justifies improving this fish pass as a matter of urgency. The timber from the Cemetery Bridge pass is available so there is nothing to stop the club completing it if a few volunteers are willing to give up their time.

Upstream of the site was a waterfall with a deep pool below it. I couldn’t resist a quick look in the depths to see what lurked below. Nothing too spectacular but I did see a trout of about 1lb but couldn’t catch it. 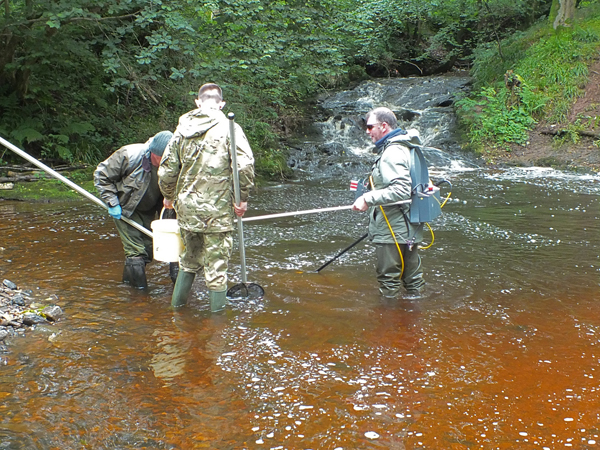 Looking for a big trout below the falls

Having come this far up the burn and knowing that salmon can access this pool, I decided to electrofish the first gravel that I found above the falls. Once again we caught a salmon but  just one. So the fish can make it over the falls and Garry assured me that there wasn’t another obstacle until above the next road bridge some distance upstream. Satisfied with our results, we headed off. Maybe I’ll have another look further upstream soon. 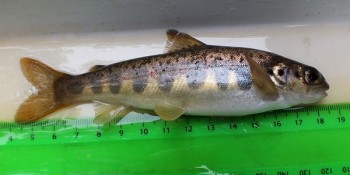 A fat parr from above the incomplete pass (137mm)

At least now we have plenty of evidence that the old pass at Cemetery Bridge worked and worked well.

Update: I met with the roads department and contractor on Friday morning to discuss a few modifications to the Cemetery Bridge fish pass. I’m sure we have now worked out how best to progress and as soon as the water drops back to a low level, the work will be done. 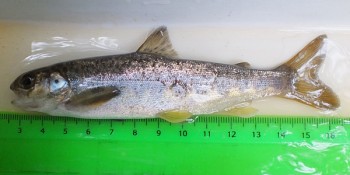