Doon Egg trial is under way

Weather once again threatened our planned work on the Doon. It was bad enough struggling with high water all summer but on the day we planned to plant the egg boxes in the river, we were subjected to blizzards. No matter what, we were going ahead with this today if we could make it to the hatchery to get the eggs. As we turned off the main road into Craigengillan, I did have my doubts whether we would manage along the driveway but we did. Tam McClure was waiting for us and our thanks go to him for providing the necessary eggs for this research. Tam has run the hatchery for over 20 years and can’t remember seeing less fish on the redds than this winter.

Throughout 2013 I’ve heard different reports about the numbers of salmon in the river; some saying that there were very few and others the opposite. Until I’ve finished compiling the catch return data, I don’t want to say much but it does appears that some upper beats have fared quite well which doesn’t really surprise me given the water conditions during the summer. Regarding spawning, we can’t be sure how many salmon spawned or where, but they didn’t appear to be in the burns. There are no obvious reasons why salmon didn’t enter these traditional spawning burns but there has been speculation that there is ‘something wrong’ in these areas, particularly on the Eastern side of the catchment. We decided that running an egg trial was a simple and quick way to identify any underlying problems that may be hidden. As a bonus, we are running a similar trial on the Ayr and it will allow us to compare survival in both catchments as exactly the same techniques have been employed. Electrofishing surveys this coming summer will serve to confirm the results.

We had an interesting day despite the cold. In all we buried 12 egg boxes across the catchment. Gillian and Helen headed to the Muck Water and Sillyhole Burn first whilst Gordon and myself went lower down the catchment. Somehow the two ladies managed to complete their boxes much quicker than Gordon and I did but I think we had further to walk and tougher sites! We picked strategic locations that hopefully will assist with identifying/eliminating problems. Burns such as the Netherton Burn that used to produce a few salmon are not in great condition. Perhaps that’s an understatement… it was bad. I was really disappointed in the condition of this burn and the lack of adequate protection from cattle and other pollution sources. Once again I’m frustrated by poor practice that really does impact the fish populations of our rivers. It will be interesting to see what happens to the eggs we planted just downstream of the location in the photo below. 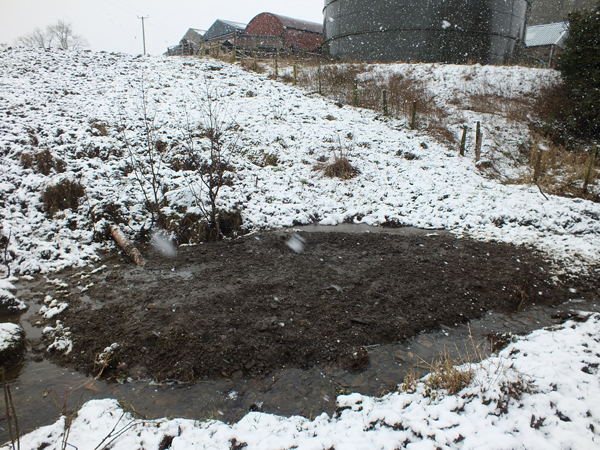 We also picked a site on the Purclewan Burn where siltation and enrichment have been long term issues but fencing by the DSFB in recent years, is helping to improve things (we hope). There were good gravels at the location we chose but they were so compacted that we found it difficult to dig a redd. Compacted is perhaps the wrong terminology; concreted may be more accurate. The fine silts had effectively filled the air spaces within the gravel making it solid. This can impact on a fish’s ability to dig a redd and also on the survival of eggs in the gravel due to low oxygen levels. Water doesn’t flow freely through this type of impacted gravel leaving eggs devoid of the necessary oxygen for survival. This burn certainly would benefit from a gravel cleaning exercise before next winter as I’m sure would several others. 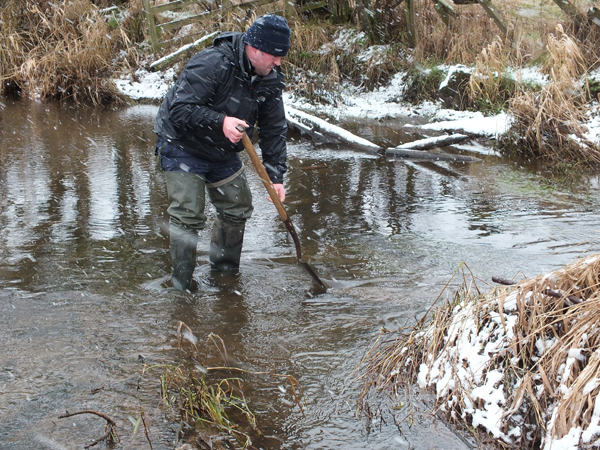 Gordon struggling to dig a redd.

I’ve previously written about the how the Culroy Burn doesn’t appear to be producing anything like the number of salmon or trout that it should so it too was targeted for trials. We chose two site; one near Sauchrie high in the sub catchment and the other downstream of the A77 at Minishant. Earlier this year we recorded salmon as far upstream as Otterden woods. There should be nothing to stop salmon reaching another 300m upstream to  our chosen site.

This burn had a reputation for producing sea trout not so many years ago and the habitat on the whole remains good although erosion is evident along it’s length but only in areas where livestock have unchecked access to the burn. This is an area that could be improved but I understand there is some resistance from a major landowner downstream. Upstream the Garryhorn Burn should provide good habitat too and I will investigate this further during electrofishing this summer. 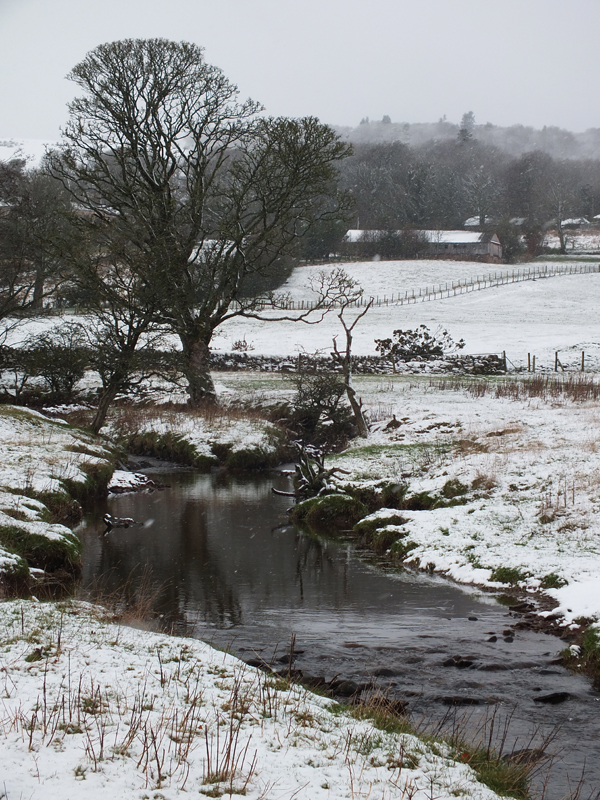 Culroy Burn near Sauchrie where water quality and habitat appears to be good despite some erosion taking place. This is an area where fencing could help to improve things. 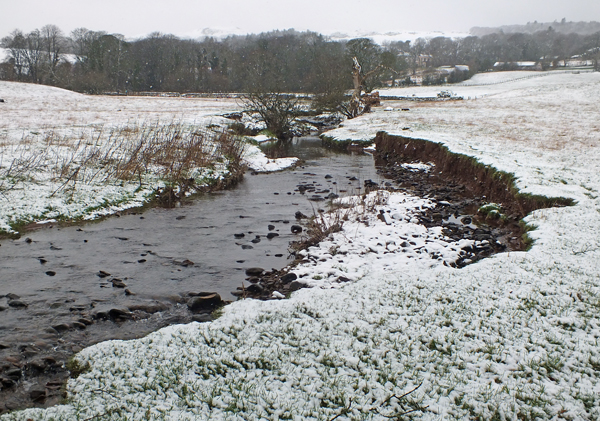 Livestock driven erosion on the Culroy Burn. It wasn't as bad as areas further downstream but it could be improved.

We planted eggs on the Chapeltoun Burn just upstream of our regular electro fishing site. This site is consistently poor but salmon do access the burn annually and we almost always record salmon fry at very low densities. I fear we dug a grave for the eggs today and don’t hold out much hope for their survival as the water quality was very poor and enriched. It was so bad that we could hardly see the redd we dug in the mirky water.

What will be apparent to readers is that many of the sites we visited in the middle catchment were poor and this has to have a cumulative impact on recruitment on the main stem of the river downstream of these inputs. These problems have taken many years to develop to the current level and it will take many years to rectify them. Fencing costs money and that’s hard to come by in the current financial climate. SEPA has been visiting farmers as part of the priority catchment initiative to encourage farmers to improve their performance and reduce diffuse pollution. ART provided a list of priority areas for fencing to SEPA so that they may encourage farmers in key locations to approach the Board for support and perhaps a contribution towards the cost of fencing. Unfortunately none have come forwards asking for help and it appears that SRDP funding is now extremely limited and difficult to secure. I’m not sure what we have to do to force change but change is exactly what we need if we want to see improved numbers of fish in this river.

Further upstream Gillian and Helen found that the water quality and habitat appears on the whole in good condition and there weren’t any obvious inputs stemming from industry in the area. It will be very interesting to see the results of this trial and compare the burns to one another. 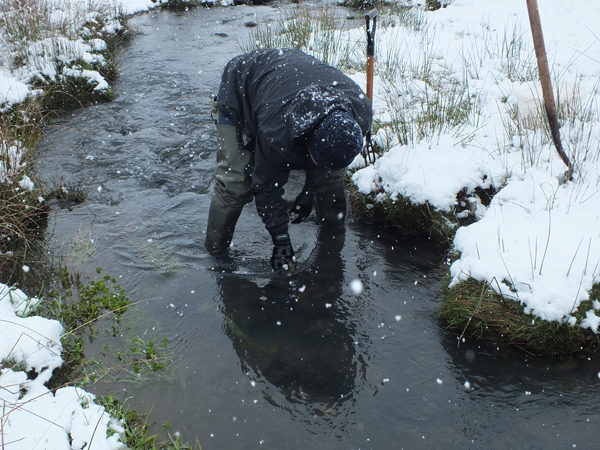 An inaccessible burn but worth including in the trial due to its proximity to industry.

Hopefully we will be able to report back in a couple of months with good news. Tam will let us know when the eggs in the hatchery are hatching and we will then return to see how the boxes have fared. I’ll keep my fingers crossed.