Once again the Kilmarnock Water didn’t disappoint as we finished off the fish rescue we started yesterday. We arrived at 9.00am and set up. Gillian and team carried on where we left off yesterday with the bankside and generator set. Helen, Kyle and myself went upstream to the footbridge at Sandbed street with the Hans Grassel backpack equipment.

Things started slowly and there didn’t seem to be as many fish as further downstream but eventually we started find a few more. The habitat in this area is most suited to fry and of course they are yet to emerge from the gravel at this time of year, which probably accounts for the reduced numbers. We did find a few trout and salmon parr that were very small (smallest was 73mm) and could be mistaken for fry but as these must be starting their second year in the river, they are parr. Interestingly we found good numbers of parr at the edge of the cobble road. Cobbles and boulders are typical parr habitat so it shouldn’t have surprised us but considering how compacted the road is, I didn’t expect as many. I’m very glad we fished them out as the contractors will soon be removing the road and many would have been lost (we may try to fish this edge again immediately prior to it being removed).

Gillian and Co had started downstream and were progressing towards St. Marnock Street Bridge. All was going well but again we noticed a whiteish scum coming downstream shortly after 10.00am. This happened yesterday on and off throughout the day. I was determined to find the source and our volunteer Kyle nipped upstream for a look for me. It turns out that a cast iron pipe was the source just downstream of the storm water otlet. This pipe was spewing raw sewage into the river and it appears not to be a new problem. I will speak to SEPA in the morning about this. In the meantime we all felt reluctant to break for food! 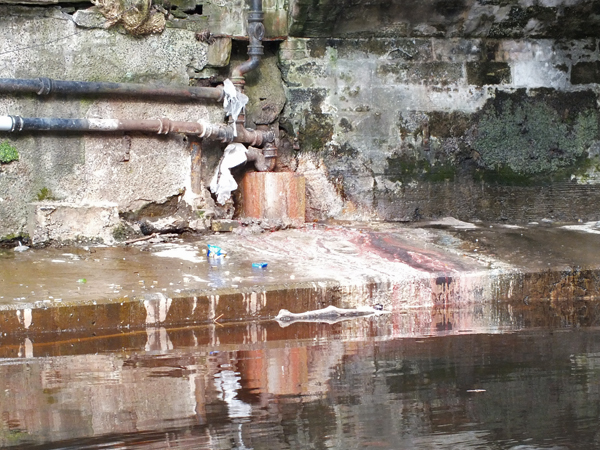 Evidently not a new problem.

By lunchtime we had reached the top pool on the stretch just below Sandbed Bridge. Last year this pool was a surprise to everyone for two reasons…the depth and the number of good trout it held. Whilst the contractor had to part fill this pool to complete the works last year, they have yet to complete this section and will restore it to the original depth shortly. Today we arrived to find a maximum depth of about 4′ which is very fishable with the back pack set on pulsed. Helen and Kyle at the ready we proceeded to extract over 20 of the best trout we caught over the 2 days fishing. The largest topped out at 39cm or around 2lbs which is a fantastic fish for this river. On closer inspection, this fish had damage to its dorsal and I decided to take scales to determine whether it is of wild or stocked origin. Stockies often have damaged or mutilated fins. 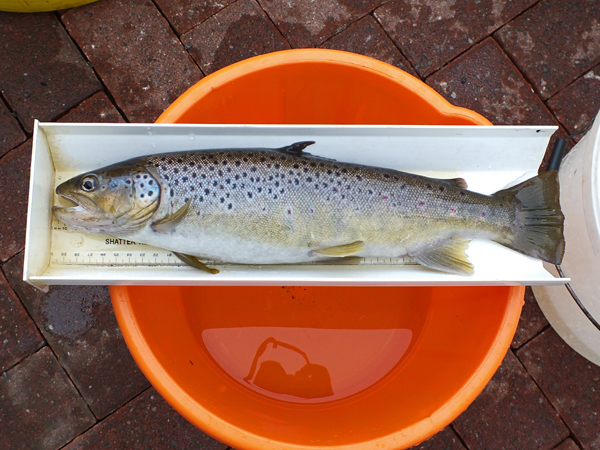 What a fish! About 2lbs of trout but is it wild? 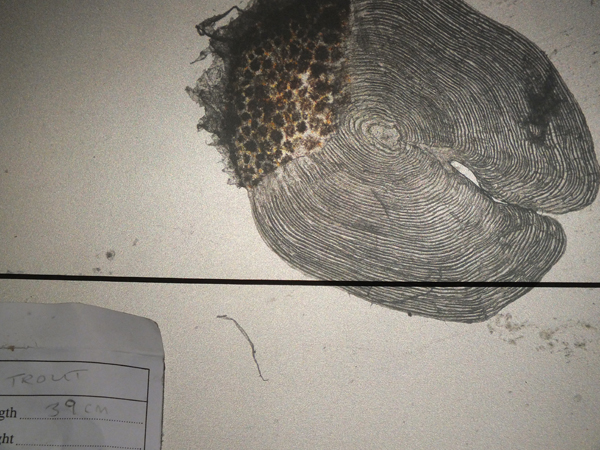 Scale from the largest trout we caught in the upper pool.

Apart from the obvious damage to this scale, there is little definition between seasons revealed in the growth rings.  I suspect it is a wild trout of at least 3 and probably 4 years but anyone reading this with experience of scale reading is welcome to chip in with their opinions. Unfortunately none of the other scales taken were original and couldn’t be used.

We headed back to the vehicle with our catch passing Gillian’s team on the way. We didn’t gloat but were smugly reassured that we had the biggest fish and the largest haul but didn’t stop to check. Helen and I took scales from a range of fish and sorted the minnows and loach from the salmonids. We found one Gudgeon in our haul which we euthanised as it is an introduced species that was out-with our stocking licence. 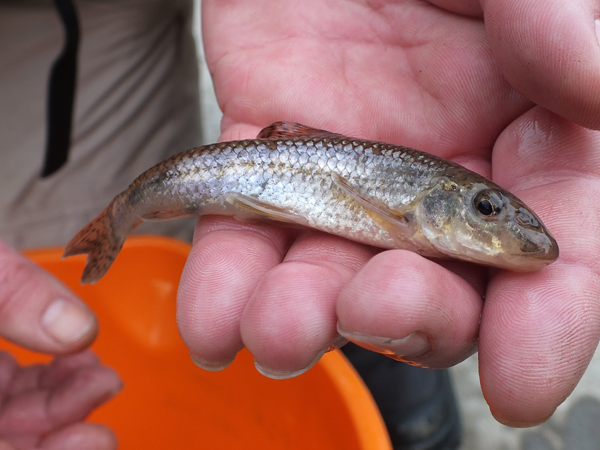 Bottom mouthed Gudgeon; an introduced species that has no place in our rivers.

We had several trout that any angler would have been proud of and a range of smaller fish. The largest salmon that we caught was smolting and 165mm long. Lets hope it finds its way back in a year or two. We also caught about 20 eels from the upper section. 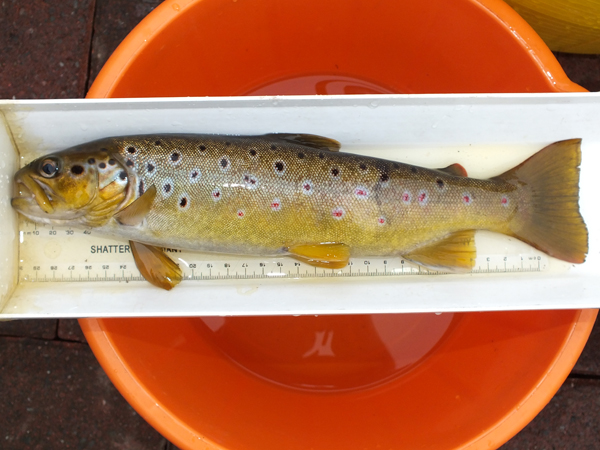 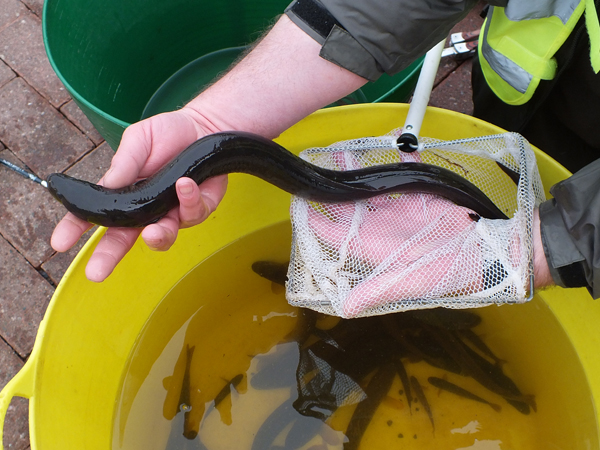 The largest eel of the haul.

Gordon and Garry Anderson arrived as we finished processing our catch. Judging by the smug look on their faces, we instantly knew they had something good in their bucket. I was shocked to see the ugliest but largest trout of  the rescue looking rather moribund in their bucket. Gordon assured me that there was something far wrong with this fish before they even fished it out. He saw it lying in shallow water alongside the road and it made no attempt to escape. On closer examination, the fish had a terribly deformed lower jaw and couldn’t close it’s mouth. Judging by the overdeveloped operculum, I’d say this was either a very old injury or ac congenital deformity. This was a kelt and obviously about to die so it was decided to euthanise the poor thing rather than put it through the further trauma of containment then relocation. 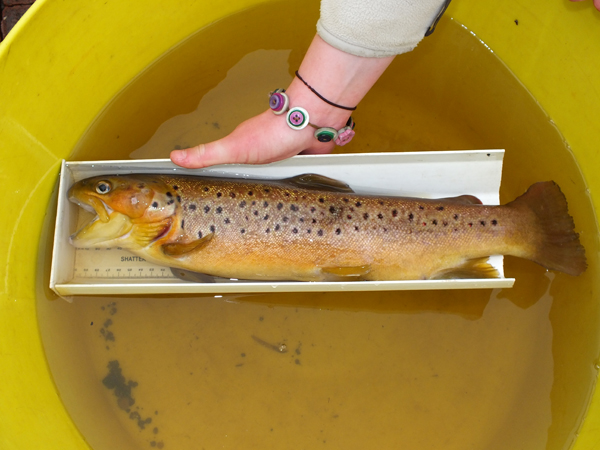 Once again I removed scales to look at later which revealed that the fish was 5 years old and had spawned in 2011/12 and again this year. There was a growth burst after year two followed by fairly steady growth until the end of its 4th year when it spawned. Growth since spawning last winter was limited. (Scale reading isn’t an exact science and often leaves you questioning things more than it answers anything). 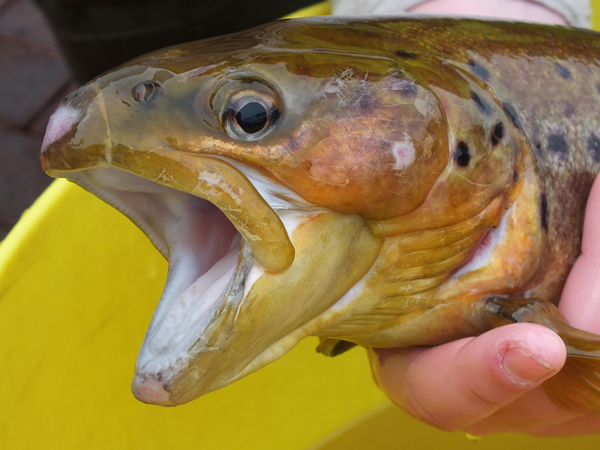 The face only a mother could love! The lower jaw was virtually immobile.

Another curiosity that they had caught was a Brook Trout. This shouldn’t have been in the river and I am concerned that this isn’t the first report of non native species in this river that appear to have been introduced for sporting purposes. I am determined to confirm the source of this and other fish that have appeared in Kilmarnock/Fenwick Waters including blue trout and common carp. I will check with MSS if a licence has been issued nearby. 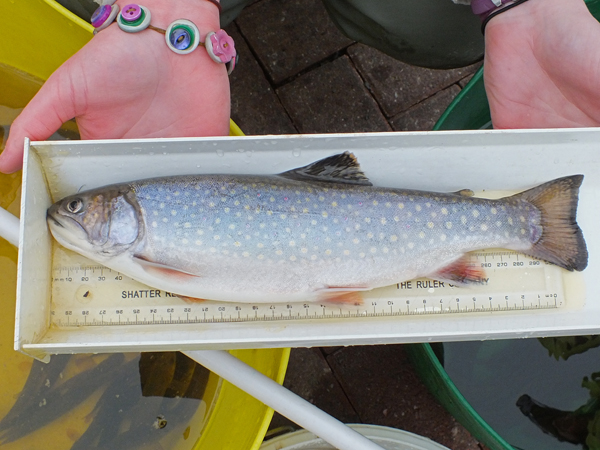 Brook Trout. Fat bellied and lovely looking but not supposed to be there.

All in all I’d estimate that we rescued nearly 1000 salmon and trout, about 50 eels over two days. Other species included minnow, stone loach and sticklebacks but there weren’t many at all.

I am concerned at the change I saw at the weir below Sandbed Street Bridge. There has been significant deterioration of the weir since the work began and much of the cobble construction is undermined. We even caught a decent trout from a gap in the boulders. The tow of the weir is cutting back upstream presumably as a result of the increased flow due to the narrowing. The extra water down the centre of the weir has caused this erosion. Effectively this weir now requires a leap for fish to get over it. At the moment, salmon and larger trout should be able to make it at certain flows but I doubt if the collapse will stabilise at it’s current position. Thre is a deep pool for take off below the weir that wasn’t there before. The channel dowstream has changed somewhat too but I’m sure we can live with these changes if we can find a solution to the weir problem. Thankfully MBV and Scottish Water have always been very eager to protect the river and fish and I’m sure a solution can be found. I’ll make SEPA aware of our concerns tomorrow. 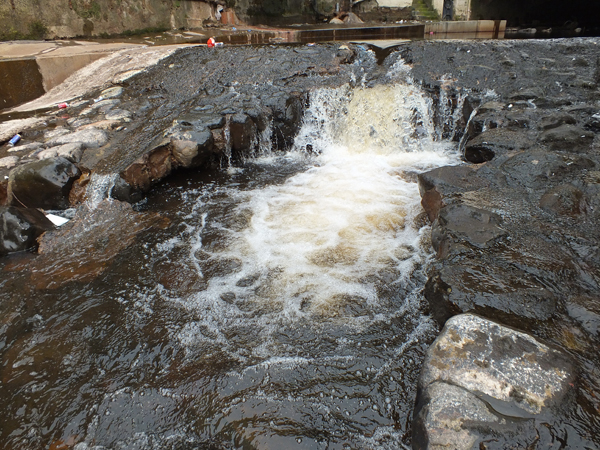 Where there was a slope, there is now a leap. This situation may develop into a major issue if left in its current state. Of course I hoped for a full removal but apparently a pipe crosses the river in the middle of the weir which prevented this option. Maybe we will get there yet if a quick fix can't be found!