A wet afternoon on the Doon

What started as quite a nice day ended up with the team soaked through as the rain came down at Dalmellington. We had a busy day though, looking at burns around the town and concentrating on the East side of the catchment where most of the past and present mining activity has taken place. Reports that few salmon were found on the redds last year were of concern so we set out to establish if in fact this was the case. Of course, with the Doon DSFB hatchery producing a large number of fry this year, I had to establish where Tam McClure had stocked his ‘babies’. Tam isn’t keeping so great at the moment so unfortunately he couldn’t join us but we wish him well and will give him an update as soon as the results are fully analysed.

The Sillyhole Bridge site was our first port of call and it was encouraging to see this site so lush with marginal plants and trees that have developed in recent years since the fencing was erected. The site has changed considerably since I first visited with Pete Minting and Brian in 2007 and a deep pool has formed in the middle of the burn providing a safe haven for migrating salmon and larger trout. 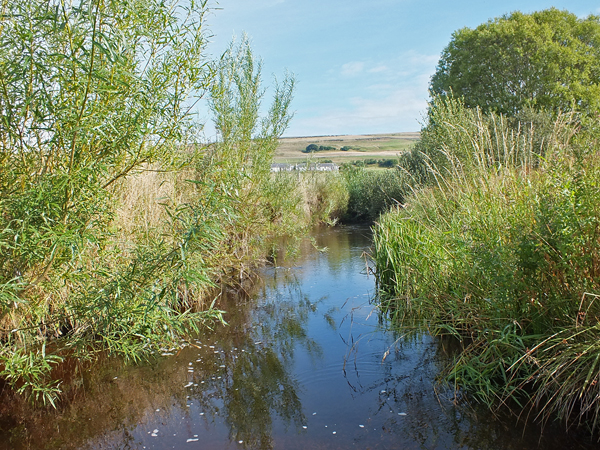 The Sillyhole Bridge site where the pool is now over 4′ deep. It’s beginning to look like a great wee spot.

Results were encouraging as in recent years this site hasn’t performed that well. I noticed that there was less silt than the last time I looked over the bridge and this can only be attributed to the recent cessation of the opencast mine. Conductivity ( a measure of the dissolved salts and nutrients in the water) remains high at well over 700 micro Siemens but this is lower than recorded in recent visits. The marginal vegetation and trailing branches offered the best cover for fry and parr. I’m keen to see how the results compare with recent years as I expect they are up slightly. There has been no stocking here since 2009.

We looked at the Muck Water and further up the Cummock Burn too. The mine discharge is still spewing from Pennyvennie OCCCS but we saw a few trout downstream of the discharge so although not ideal, it can’t be too bad. Upstream of this point there were few trout and no salmon despite it having been stocked in the past for several successive years, but not recently. The Muck Water was in contrast full of salmon fry. I say full, I mean reasonably well stocked, but these may largely be down to Tam’s efforts.

We headed to the Muck Water downstream of Craigengillan Bridge as this site hadn’t been fished since 2006. ART installed logs at this location at some time around 2002/03, designed to create run and riffle and a scour pool downstream. Whilst the logs aren’t perfect, they at least provide some variety in habitat that would otherwise be featureless. The site does lack cover for fish but none the less, we found fry and parr. As we fished the site, the rain came on heavy and we finished recording the catch on soggy paper. Joni, our work experience student is getting the hang of distinguishing trout from salmon and has really enjoyed her week so far. 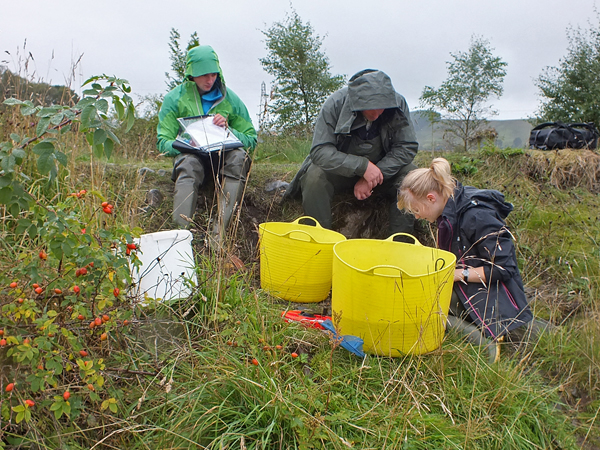 Joni recording the catch in the rain.

Finally, we headed for shelter at Dunaskin where our electrofishing site is largely sheltered by trees and an old railway bridge. It takes a keen eye to spot fish in the dark! Results again appear to be encouraging but as always could be better. I don’t want to say too much as we haven’t entered the numbers into the database yet but I was pleased to see quite a few parr coming out of the darkness. 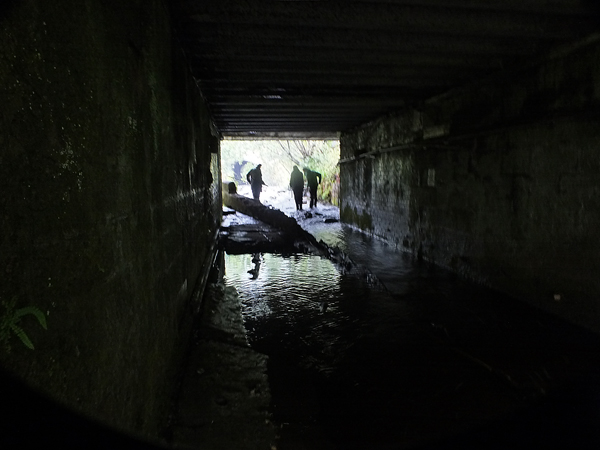 Dunaskin site is a challenge for the netters.

The generator ran out of fuel just short of the top of the site so I felt slightly cheated as the fry were increasing in numbers at that point but that’s life and it was rapidly approaching tea time so we headed back to the office. Tomorrow we will be completing the remainder of our planned survys for the Doon catchment. Next week , off to the Duisk and Tig in the Stinchar Valley before a few more days on the Guelt at the top of the Lugar system (weather permitting of course).