The You Tube videos of combat fishing in Alaska are extreme but this morning with the Glenmuir in great order, I couldn’t help but draw comparisons between this great wee river and these North American waters.

As we headed towards Dalblair, there were cars and anglers everywhere. By all accounts, yesterday was the same although we only heard reports of a lack of fish. Cumnock Angling Club this year secured a lease on the upper Glenmuir Water  downstream of Dalblair bridge. Before the lease was agreed, the factor asked me if I had any concerns about this and I did indicate that strict catch limits in line with the Ayr DSFB’s recommendation of a maximum of 3 salmon per angler per beat per season was appropriate to protect and conserve our dwindling stocks. Thankfully, upstream of Dalblair Bridge is sanctuary and no fishing is allowed. I met three anglers setting up their rods and I enquired what their tickets stipulated by way of catch limits but the responses were vague and uncertain with the general conclusion being that it must be 2 fish per day as on the rest of the Club’s water. I will need to ask the factor what was finally agreed with the club. 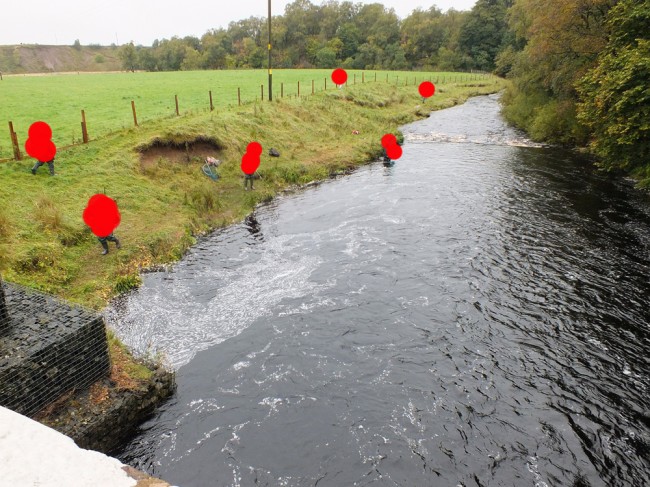 Combat Fishing not red nose day! As I’ve been informed that an angler in the picture was unhappy about being photographed and felt I had violated his rights,  I was asked to remove the image however I’ve decided to hide angler’s identities as the photo illustrates a point well and I’m sure no one could complain now!

I don’t blame the anglers for this uncertainty as the tickets don’t actually have a fish limit detailed on them but instead a leaflet is issued with the ticket that by all accounts, no one reads.

All the anglers I spoke to were concerned that the number of salmon in the Glenmuir these days is a fraction of yesteryear. They all agreed that catch and release is appropriate to help protect the fish that are left but they also informed me of a stretch where the owner insists that all fish caught are to be returned. Worryingly they told me that that stretch is rarely fished any more despite it being good water with easy access. It just doesn’t add up.

It is down to all anglers to play their part and every beat, syndicate and club has a part to play. During October, it is essential that hen fish are handled carefully and returned alive wherever possible. Simply retuning hen fish will ensure that we have future stocks to enjoy fishing for. I am encouraged to hear that once again,  Darvel Angling Club has closed their stretch of the River Irvine at the start of October to conserve stocks. This is a very sensible approach and pays dividends for fish numbers.

Following the publication of this article, there has been general support for the content and concern about the level of angling pressure that takes place on our spawning grounds. Today however, I received a call asking me to remove the image as one of the anglers pictured had objected as he felt it violated his privacy. I disputed this and pointed out that the article was justified and the photo illustrated the point well but I was informed that the person was threatening legal action if I didn’t remove it. Hmmm, I don’t need that kind of hassle despite my certainty that I’ve not violated any privacy laws so in the spirit of good relations,  I have decided not to remove it but to remove all identifying features from the anglers pictured instead. Hopefully all parties will now be satisfied.

On another point raised within the article, I hear that there have been over 30 salmon caught in a single day on the upper reaches of the Glenmuir. One angler has by all accounts landed 5 to his own rod in a single day but well done to him, they were all released. Seems like there have been plenty of fish encountered in the last few weeks. Tomorrow is the last day of the season so hopefully after that, the fish will be safe to get on with their most important task…spawning.