After years of negotiations, work finally commenced this week at Catrine Dam. This is a two pronged project, 1. To install and operate a hydro scheme and 2. To stabilise and protect the weir.

Catrine Community Trust are in receipt of the appropriate CAR licences from SEPA to allow them to abstract water from the dam, through the voes system and turbine house before returning the water to the river approximately 800m downstream. Prior to commencement of this operation, they must first improve fish passage at the dam to allow the migratory species to pass more efficiently through what was a poorly functioning ladder. After much debate and at times terse exchanges between the DSFB, ART and Catrine Community Trust, a final plan has been approved by SEPA that allows the project to continue. Whilst it wasn’t a solution that the DSFB or ART thought ideal, it is progress and some key improvements have been included, particularly at Anderson’s where the gap will be widened, the water velocity reduced and the eroding concrete is to be stabilised. This should allow salmon and trout to reach the bottom of the fish pass with ease. The velocity and turbulence within the fish pass is also to be reduced to allow migtration through the pass to be improved. This is especially important as during the hydro abstraction periods, there isn’t likely to be a route of passage over the dam itself as currently exists except during very high water. During low flows there is a ‘hands off’ level at which point abstraction and hydro generation will cease. The fish pass improvements will be monitored and a camera/counter system is to be installed to assist with evaluating fish migration. 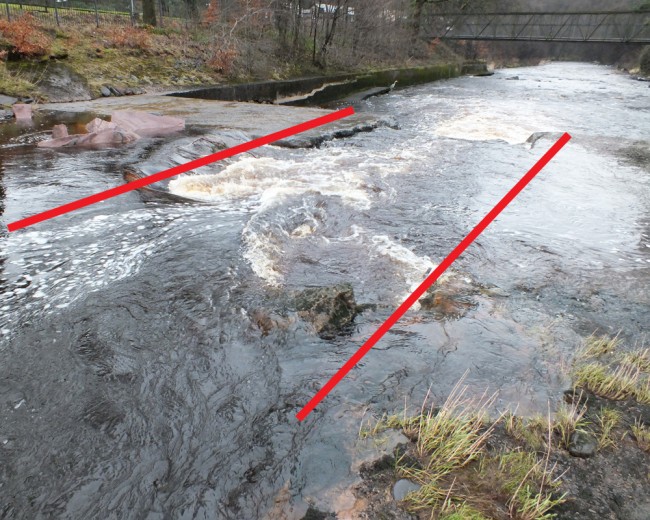 Anderson’s where the gap will be widened to approximately the width indicated by the red lines. The concrete which is collapsing will be stabilised and the pool below the fall will be deepened by removing bed rock allowing the fish to take off closer to the leap.

To ensure that the weir itself doesn’t collapse (it is a scheduled ancient monument and is therefore protected) the dam must be stabilised and encased in lime mortar. As a component of this work, the alterations to Anderson’s Leap will also be delivered. This work will take place over the coming months with completion expected in 2014.

Whilst the planned works didn’t all meet our expectations, it should mean that fish passage is improved and of course it will be monitored closely for efficiency. If the improvements fail to deliver the required results for fish passage, then further alterations will be required. Ultimately, we are seeking improvements over the current unsatisfactory situation and we expect this will be delivered. 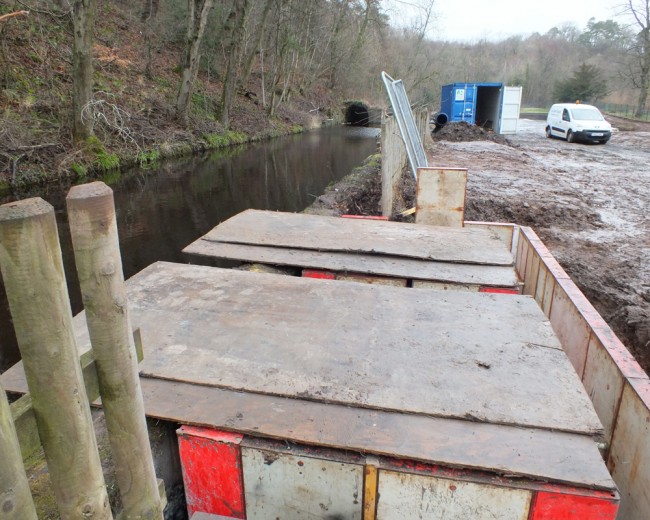 The work this week has included the installation of a smolt bywash chamber and pipe to take any smolts and kelts that are drawn into the hydro flow, back to the river. Included within this chamber will be a trapping facility by which the DSFB and ART will be able to monitor smolt numbers annually. Screens will be installed to prevent fish passing into the voes and through the turbines. 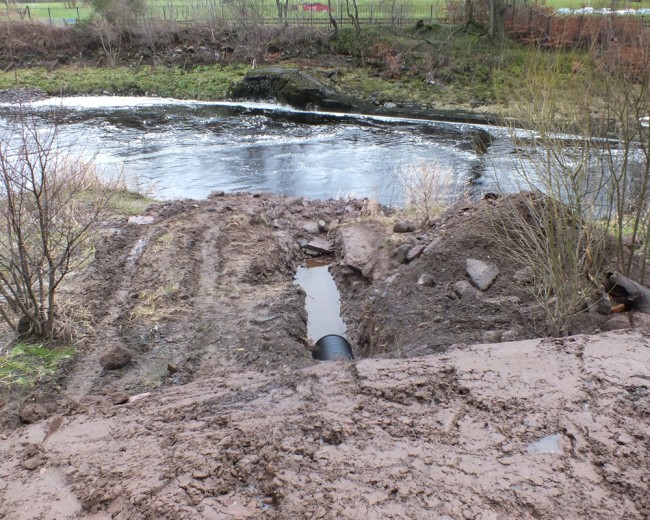 The smolt bywash pipe. It will enter the river below the surface and return any smolts and kelts to the river. I understand there is to be a large pre fabricated concrete section on the end of this pipe.

We also saw that the fish pass has had some work done to it. A hole has been cut into the side wall of the lower chamber to allow the water that is to be diverted from the upper chambers to be returned to the lower chamber. 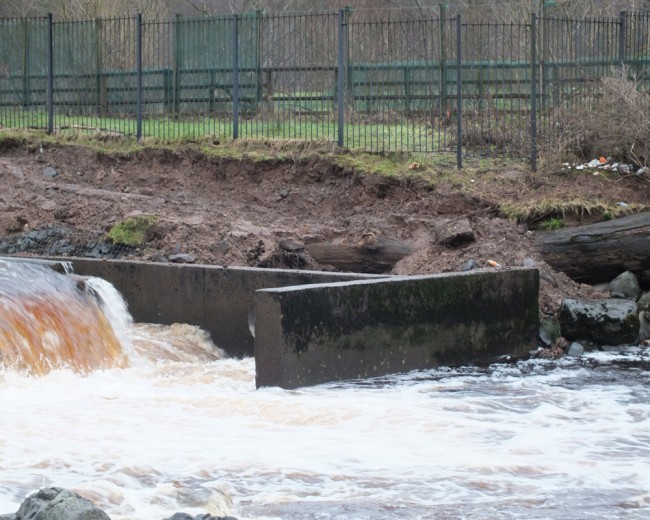 The hole in the side wall of the fish pass can just be seen.

One final point is that neither SEPA nor the DSFB hadn’t been notified in advance of this work taking place although it had been approved in principle. Final details of the smolt chamber and entrance have yet to be agreed or issued to the DSFB for consultation. Lets hope the lines of communications between the parties involved is improved to avoid any further issues arising.