Last week, we fished the upper gravel extraction site on the Glenmuir whilst waiting on the backpack equipment to be repaired. ART has fished this site annually since 2006 and this years results were poorer than any other. With this in mind, I looked at the results more closely to identify exactly what the trend is and to see what other information may be included in the results. All the numbers and statistics quoted relate to salmon only and no assessment of the trout population is inferred. (The trout appear to be relatively stable at this site but it is principally a salmon site). 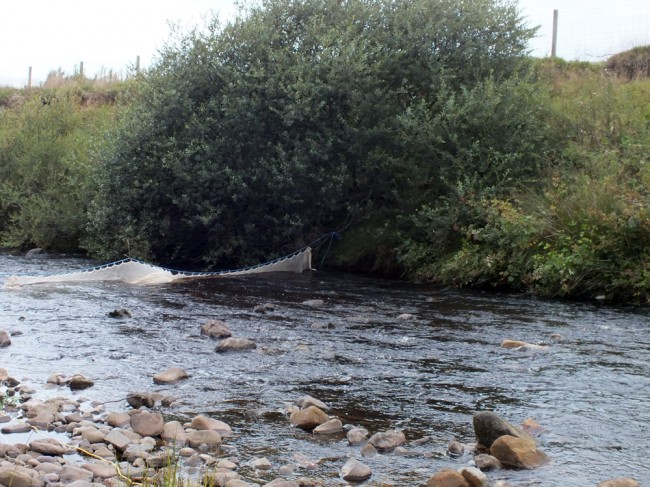 The lower end of the Glenmuir gravel extraction site. Habitat is good for both fry and parr but not ideal for trout.

The site is above opencast influences and apart from a small amount of forestry, there are no other obvious influences that may affect results. Angling exploitation is reported as low in this area but pressure is high. This site and entire area is important for spawning.

Glenmuir results illustrated in graphs. The description of each graph is in the text above the image.

The area fished is relatively stable and fluctuations are largely explained by changes in water levels (increased width) and slight variance in the length of the site (+/- 1m approx). As results are fully quantitative and calculated per 100 square metres, these variables become insignificant.

Anglers regularly comment that the fish aren’t coming back to the river in numbers and these graphs appear to confirm this. We has been warning of falling numbers for years. No longer can these statistics be ignored. Fry numbers are naturally much higher than parr and subject to great mortality in their first year. Parr at this site are generally 1+ year old at the time of survey and their numbers are showing a slight decline. There are always one or two 2+ year old parr and this remains relatively stable. The parr numbers appear to be more stable than the fry numbers but the trend line indicates that overall they too are in decline. This is worrying. This years poor fry results indicate that spawning success was poor last year. There could be several reasons for this but with few salmon seen on the reeds at the back end of last year, then most likely there were fewer salmon surviving to spawning. Anglers reported poor catches in 22013 and this seems to be confirmed by these results. Marine survival is implicated in poor stocks around the country so why shouldn’t it apply to the Ayr system too? With increased angling activity on the upper Glenmuir, this may have had a slight influence on the results too but catch returns wouldn’t support this so we can’t be certain. Similarly, poaching may be taking it’s toll too. 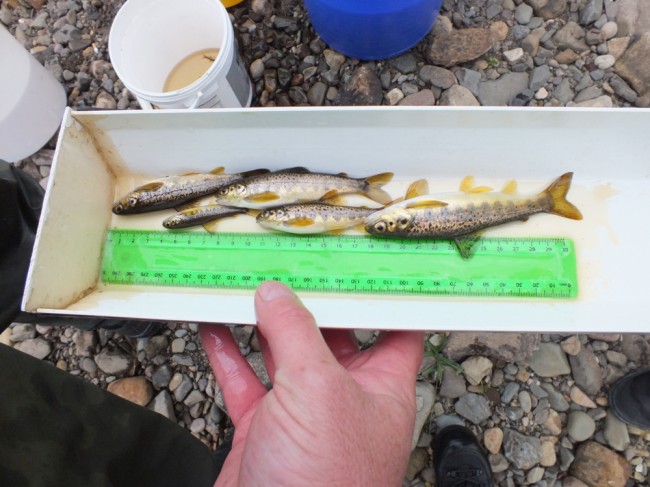 A few fat and golden parr from the Glenmuir site. I did comment to Gordon that on the whole the parr were leaner than we had seen elsewhere in Ayrshire so far but this selection were doing well.

Further down the Lugar and Ayr catchments, water quality reduces and so too does egg survival and spawning success. Over the years, the upper Glenmuir has been the saviour of the Lugar stocks. With this now obviously declining, this is a very worrying development. Let’s hope it is just a short term blip and next years results buck the trend, but I fear this is unlikely.

The call to stock the river should be resisted as parr numbers although down, haven’t declined at the same rate as the fry population. What would be much more beneficial would be to return all fish rather than kill them. Ensuring that adequate numbers are available to stock the river is the easiest and most natural form of managing stocks without all the potential problems associated with hatchery reared fish. Given the opportunity, the fish will stock the river much more effectively than any hatchery.

This is just one site and as yet ART hasn’t completed their survey work for the season. The timed results across both Ayr and Lugar were also disappointing but have yet to be analysed. If this result is an indication of what to expect at other sites, then we should all start to consider the implications of killing any salmon. We ignore this information at our peril.