What species are most common on the Ayr?

The title of this post poses a question that stemmed from an observation that ART made when electrofishing a site on the upper Ayr in 2011. On Friday we returned to the same site, keen to see how things may have changed. Until this season when electrofishing, we have only ever recorded trout and salmon in detail. Other species we count in brackets rather than individually e.g. eel (1-10) (11-100) or (101 – 1000). On the Ayr catchment we commonly find minnows, sticklebacks, eels and stone loach but occasionally grayling and very occasionally perch. 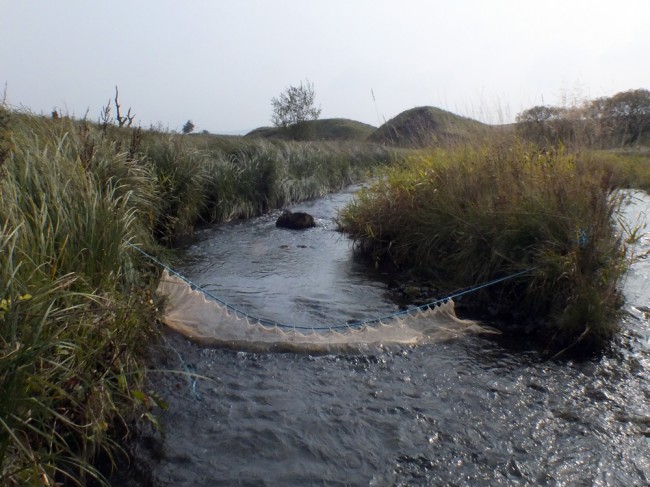 The site at Townhead of Greenock on the upper Ayr.

The prevalence of stone loach in the Ayr system raised our concerns in 2011 but none more so than we arrived to fish a site near Townhead of Greenock Farm where the biomass of stone loach appeared to outnumber salmon considerably. We didn’t count the loach but we did discuss the overall increase of this species that we had noticed over the last few years. This year we’ve been counting loach along with salmon and trout and the results are very concerning. At many sites stone loach appear to outnumber salmon by 2:1. Compare the two images below. The blue bucket contains salmon fry and the yellow contains stone loach. What impact stone loach have on the salmon population, I’m not certain at the moment but they are sure to compete for space and food. I will be looking into this in more detail during the winter months but from what I’ve read so far, there is some crossover between preferred food sources for trout and loach. Stone loach are pollution tolerant and can tolerate reduced oxygen levels compared to salmonid species. 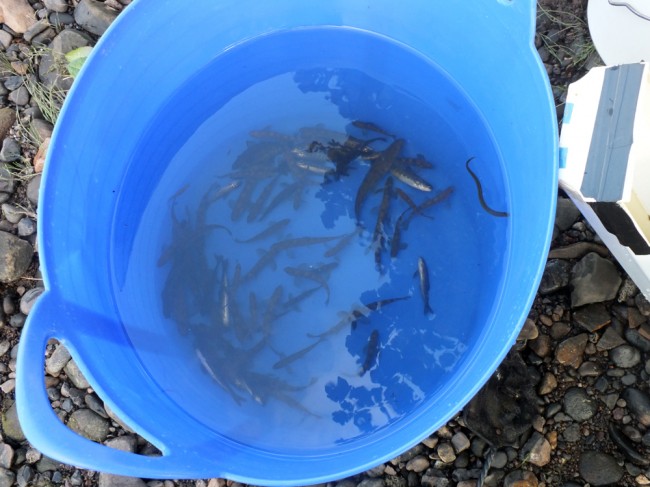 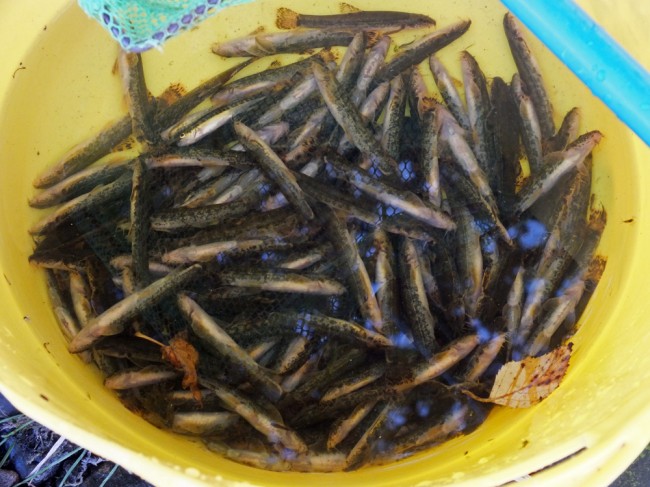 220 stone loach from the same site

One of the main problems causing this imbalance to occur is the condition of the substrates. For mile after mile, much of the river bed is covered in algae and moss in a thick layer. The bed should be relatively clean and free of plant growth. The moss and algae catch sediment washed down the river. If you walk across the site, clouds of sediment are disturbed. I believe the reason why moss and algae are dominant in the upper reaches is the increased nutrient in the water that feeds these plants. Historic mining and more recent surface mining activity, we believe has led to increased nutrient loading in the river. Upper catchments are typically lower in conductivity than lower catchments, not so on the Ayr. Conductivity is a measure of dissolved solids, (nutrients/minerals – organic and inorganic ) and is normally measured in microsiemens per centimetre. Underlying geology and temperature affect the level of conductivity. Inert bedrock such as granite is more stable than the coal measures found in the upper Ayr catchment so naturally the upper Doon water is of lower conductivity than the upper Ayr’s. As water temperature rises, so too does conductivity. In areas upstream of mining influences (recent and historic) on the Ayr, we typically record levels of  180 – 220 microsiemens. Downstream of coal sites where discharges occur, we see these levels rise to 6 -700 microseimens (or greater). The Powharnol Opencast site contains a huge void that has now filled with rain and upwelling groundwater which is overflowing into the river immediately upstream of Nether Wellwood Bridge. The conductivity of this input was measured at over 730 microseimens last week. The Kames Colliery site where a reed bed trees upwelling mine water discharges water at over 1000 microseimens to the river compared to the natural levels found 300m upstream of around 180 microseimens. Similarly the lower Ponesk and the Stottencleugh near the top of the system exhibit the same high levels. On the Lugar side of the catchment the same phenomenon is occurring. Avisyard Burn (flows from the Garleffan restored Coal site) regularly exceeds 2200 microsiemens per centimetre and the discharge from the settlement ponds at the Duncanzemere coal site are similarly high. The void at Skares and at every burn where inputs occur from coal sites, conductivity is significantly increased. How long these levels remain elevated is anyone’s guess but when the nutrient levels are so increased, and the substrates are so impacted, is it any wonder that the salmon spawning success is reduced? I suspect the Dippol Bun receives water from the Darnconnor void that was worked back in the 80’s and early 90’s. I will check, but from memory, conductivity on this burn has returned to more normal levels after around 25 years or so perhaps indicating that there is hope for the future (unfortunately we have no historic record of conductivity levels on this burn).

It seems likely that salmon would struggle to clean the volume of moses and algae from the bed to dig reeds and if they do, I expect that the substrate quickly becomes choked again with this material. Perhaps this is one of the main reasons why the river Ayr system is showing such a poor level of salmon stock. I have raised these concerns with SEPA previously. One of the problems we face is that discharge consents from open casts must meet certain parameters. They mostly do and clarity of water stemming from sites is generally excellent but that doesn’t mean they aren’t polluted although they do meet SEPA requirements. The pollution we can’t see is the enrichment, the dissolved nutrients in the water. The worthwhile Diffuse Pollution Initiative that SEPA has operated for the past few years will never tackle these issues as it focuses on agriculture and aims to protect bathing water quality and status by reducing bacteria, enrichment and suspended solids mainly arising from agriculture and we fully support this. 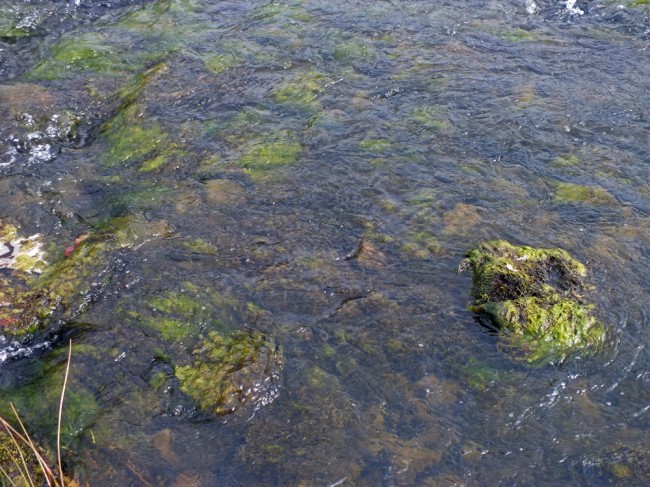 The bed of the river where salmon should be spawning in little more then a couple of months. The substrates are of suitable size for spawning but the condition of them may reduce success.

We will be discussing these issues again with SEPA and other relevant authorities in the near future. The Ayr Board has agreed to undertake some experimental gravel cleaning this year in an effort to boost its failing salmon stocks. We will be looking for assistance from volunteers to help with this work. I aim to secure permissions from SEPA for this activity in advance of commencing.

I quickly looked at some of the results we have on the Ayr and Lugar and put them into a chart to show the salmon and stone loach comparison. Don’t read too much into this yet but it seems the upper reaches beyond angling interests are the least populated by Stone Loach and most populated by salmon. How conductivity levels influence this hasn’t been looked at yet but I’ll see what I can do asap. 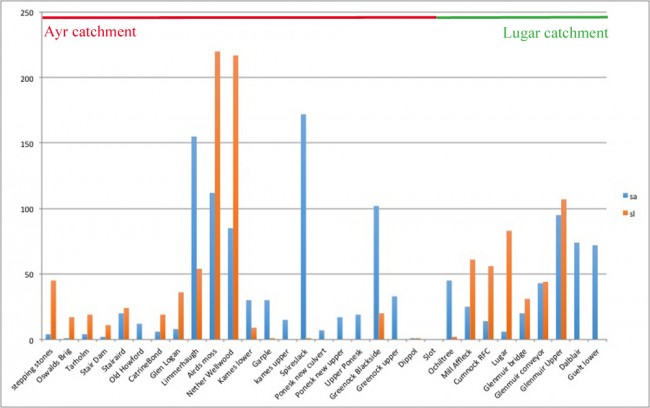 Stone loach are shown in orange and salmon fry in blue