Gordon and I headed to Hurlford this morning to meet up with several volunteers from Hurlford AC, eager to see what we found on their stretches of water today. As I hadn’t really surveyed any sites since 2009, I was keen too and I wasn’t disappointed with todays efforts. That’s not to say the results couldn’t be better, they could but it was nice to see new waters and reasonable fish stocks. As results haven’t been entered into the database yet and I’ve no access to historic data collected by Brian many years ago (until I get back to the office), I can’t really say too much about individual sites as I’ve nothing to compare them to however the fry numbers weren’t too bad and if comparing them to sites on the lower and middle Ayr, I expect they are rather better. A quick rough calculation from the Hurlford site put salmon around 45 per 100 square metres which isn’t too bad at all (but could be better). 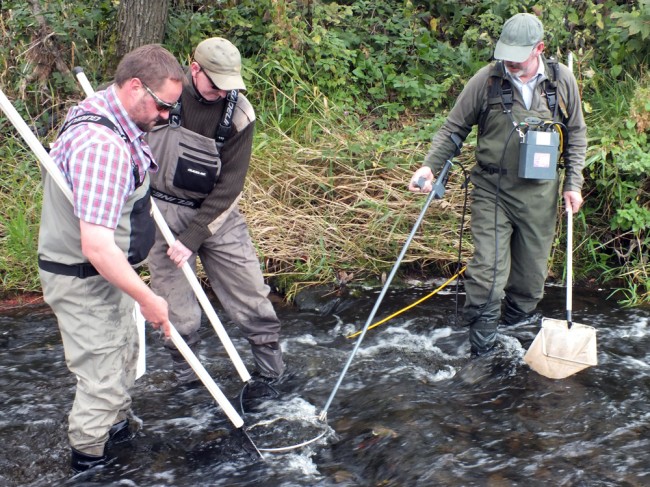 Stone loach as on the Ayr, are abundant and after the first few sites we stopped counting them as it was taking too long.  We moved from the site in Hurlford upstream to a site near the confluence with Templeton Burn. Again the salmon numbers were reasonable but I had hoped for slightly better as the habitat was varied and offered cover for both fry and parr. Again the numbers worked out surprisingly consistent with the Hurlford site but up just a touch at 46 salmon per 100 square metres. There were more parr than at the previous site as I expected. We did catch a couple of great looking parr. I’d love to see these on the end of my line in a few years if their early growth and shape is anything to go by. 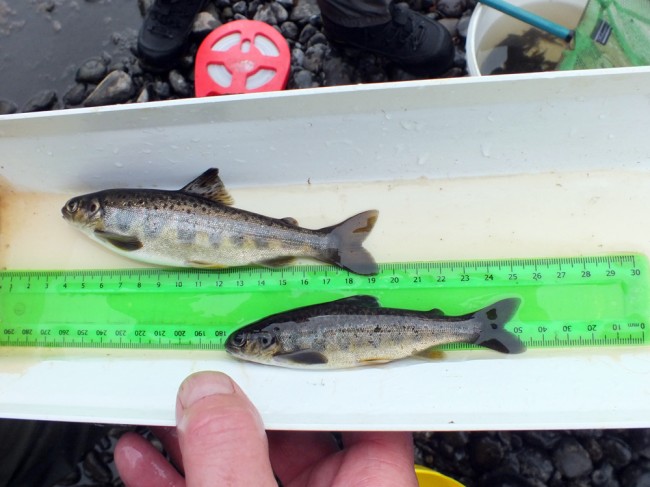 The biggest parr of the day at 145mm. Not the biggest we’ve found this season, but certainly one of the best shaped fish I’ve ever seen. The smaller fish was still a great shape. Imagine these as multi sea winter salmon!

We fished a third site at Milton Mill and were more than a bit disappointed by the catch considering the quality of the substrates  that we found.Results turned out to unspectacular at around 18.5 salmon per 100 sqm. I expected that this should be a really productive spawning site, but perhaps at winter levels, the site isn’t as appealing. This is all about getting to know not just the fish population but also a river in detail. I’ll try and walk this area when I know fish are spawning to see if it’s well used. 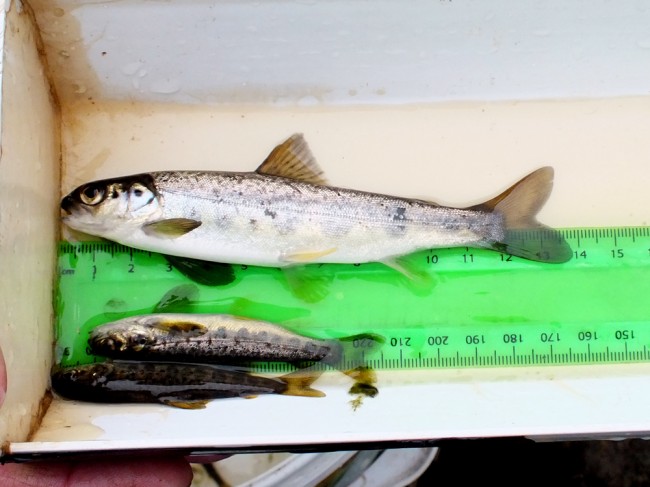 The Volga Burn enters the Irvine just upstream of the Milton Site and we had a quick look in it but with water levels so low, fishing wasn’t easy and we decided to leave the smaller burns until later. After a quick lunch we started fishing again on the lower Cessnock. This burn is seriously impacted by enrichment from intensive agriculture and the substrates are smothered in algae and silt and conductivity was high at 535 micro seimens per cm. I didm’t expect great results when we started fishing and sure enough they were poor. With 11 salmon caught I was pleased but very disappointed not to catch any trout at all. The habitat was perfect for a few trout with draped and undercut bankings offering cover.  There were trout in the pool above but none at the site.

We pushed on upstream to the bridge upstream of Hurlford where we fish the braided channel just downstream. The conductivity had fallen to 444ms/cm. Water clarity was improved and the bed appeared less silted. This time we caught 12 trout (fry and parr) which was way short but heading in the direction I expected from a burn with such a good trout reputation. On the other hand, we did catch 13 salmon fry and 9 parr, all from a relatively small site. Salmon densities worked out at 26 per 100 sqm which considering the enrichment is encouraging. This could be much improved if we could deal with the agricultural and other inputs. Habitat was excellent at this site.

The final site of the day was near Crossroads roundabout, 4km upstream of the previous site. Bearing in mind the results at the last site were encouraging, I was shocked not to find a single trout or salmon at this site. Stone loach again were abundant.  There were a few adult trout in the pool above but in the run/riffle we fished, there was nothing but stone loach. We couldn’t help ourselves and had a quick look in a tree root below the water line and pulled a stunning trout of around 11 – 12″ to the net. I am concerned that salmon haven’t managed to penetrate this far upstream or perhaps they have and something prevented them from spawning successfully or worse still, something killed them. As we didn’t find any juvenile trout either, I intend to follow this survey up with a bit more investigation to get to the bottom of this if I can. 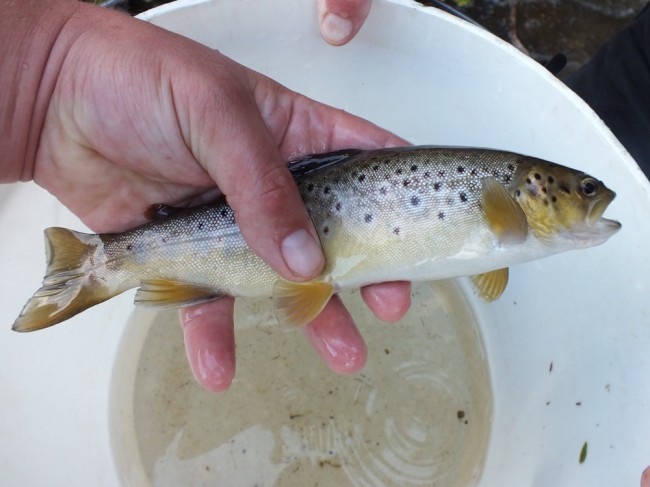 The nice trout fished from the tree roots.

We called it a day at after this site pleased with what we had achieved. The two volunteers that remained with us until the end of the day really enjoyed themselves and in their words ‘learned so much’ about their water. We did too and I’m really looking forwards to more Irvine surveys next week.