With schools on holiday today, we were accompanied by a couple of youngsters keen to see what fish we found. The day started in Galston at the road bridge at the bottom of Cessnock Castle Woods on the Burn Anne. This site has been fished before giving total of 30 salmon in 2009, 34 in 2012 and 40 in 2014. It becomes more interesting when you look at the numbers of fish per 100 square metres as the wetted area fished each year changes depending on conditions.  2009 results produced 33.4 salmon and 80.4 trout per 100 sqm. 2012 the results were slightly poorer with 20.6 salmon and 5.5 trout per 100 sqm (it was quite high water when we fished it in 2012). Todays results produced 58.4 salmon and 68.7 trout per 100 sqm, overall the best on record with a total fish density of 117.1 fish per 100 sqm. These results confirmed that the fish pass is working and salmon can navigate the structure and that trout continue to do well. 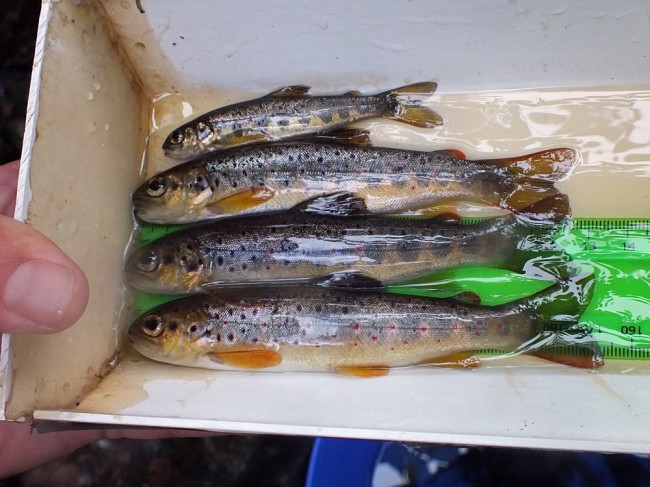 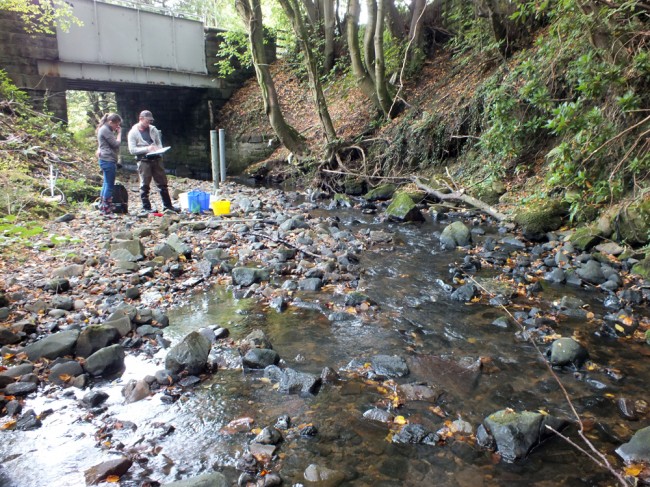 Pleased with the results we headed further upstream to the next site above another bridge where the angling club cobbled together a timber fish pass a few years ago. This fish pass isn’t the best but we found salmon upstream of it in 2012 indicating that a few fish manage to negotiate it. If ever more funding becomes available, I’d recommend some improvements here. So what of the fish population today? Well trout were good there’s no doubt about that with a couple of really nice fish being caught. The salmon weren’t there in numbers but they were there. After  some rough calculations tonight, trout numbers were the best recorded at the site with 95 per 100 sq m compared to just 16 in 2012. Salmon densities were down from 11 per 100 sq m in 2012 to 8 this year but at least they were there and both fry and parr were caught. 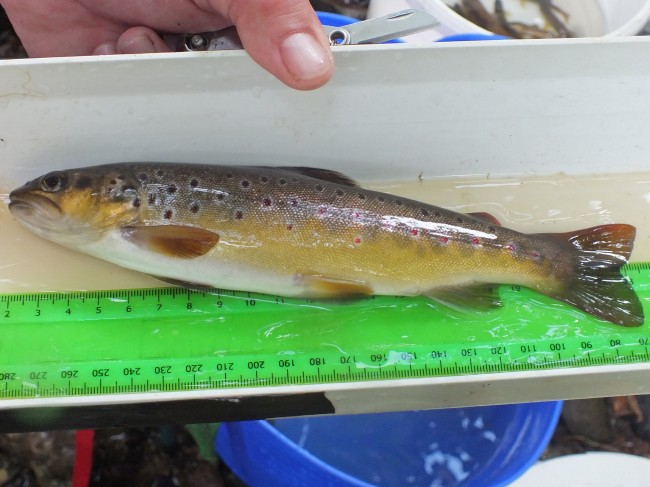 A cracking trout that we extracted from behind some corrugated iron sheeting abandoned in the burn. This just goes to show that good habitat comes in many forms and although litter, we fished about 6 or 7 trout from this same spot.

Encouraged by the results so far we decided to see if we could find salmon further upstream and headed to the road bridge at the top of Bank Wood. We have never recorded salmon this far upstream before so were delighted to find a solitary parr indicating that at least one pair of spawners reached this area 2 years ago (I took scales and will age this fish once back in the office but I’m certain is was 1+ years old). By this time we had been joined by John from Hurlford AC and his young son Ben who was enthusiastic about fishing but perhaps not by the size of the burn until he saw fish appear from nowhere. In addition to the salmon we captured a further 42 trout at the site, one of which was quite hybridy looking to me. 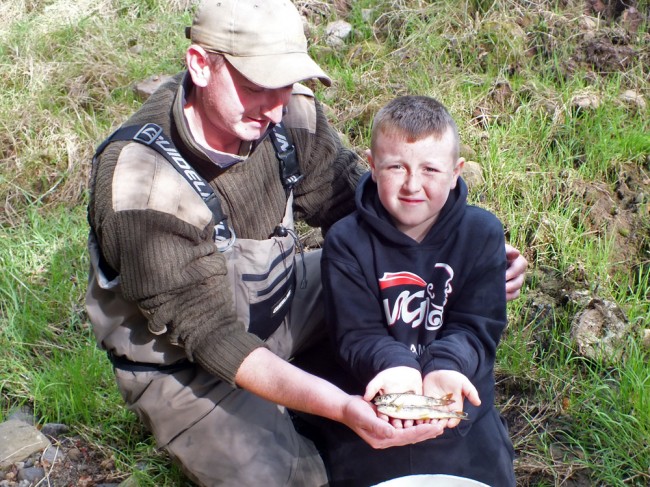 John and his son Ben holding a trout and salmon from the upper Burn Anne site. This was a memorable day for the Trust catching this salmon but I’m sure it will live in Ben’s memory long after we are all departed. These are the sort of memories that stay with us all our lives.

We decided to head back to the Cessnock to fish a few sites upstream of where we left off on Saturday. At Lawers Bridge we have a site but due to the cattle in the field we decided not to fish it. I have to say the condition of the site was terrible with obvious enrichment coming in from the Killoch Burn above the bridge and severe trampling and erosion of the banks on the Cessnock itself due to the lack of water margin fencing allowing cattle unrestricted access. These types of issues should be addressed as a priority if we are ever to see improvements on the Cessnock. Rather than give up on this area, we picked a site just downstream of the bridge where habitat was varied but bed rock dominated much of the survey section. Ben and his dad had been spotting a few good trout in the bridge pool so after fishing the site and getting 9 trout up to 185mm (probably 3+years old but again to be checked once back in the office), I had a quick forage below a big tree root at the bridge and pulled a couple of lovely trout to the net. These two measured 270mm and 258mm. Not bad trout from a dirty wee burn! 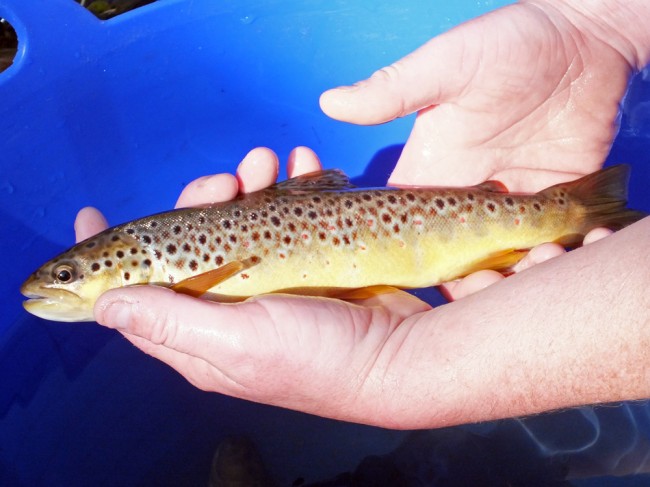 We managed 2 other sites, one was extremely disappointing in Carnell and we may need to look further into why the Cessnock isn’t producing more fry and parr between here and the A76 downstream. The other site was at Fowlers Brig near Mauchline Hill. This was a small site and didn’t look promising with a lot of silt covering the bed. It was the best looking area in the near vicinity so we set to and caught 14 nice wee trout (3 fry) form the stretch. There was a deep pool below the bridge and this produced the better trout which were up to 196mm (8″) in length.

Gordon dropped in and gave me his results from the day and apart from a first salmon fry from Alton Burn, there was nothing remarkable to report. Encouragingly, the Hag burn in the lower section still had reasonably good numbers of trout (on first inspection) but certainly down on the last time it was surveyed by Brian back in 2005/6. (I’ll need to check the densities before I say any more). I’ll look at them in more detail and of course they will be reported to the Clubs once we complete the surveys.

Tomorrow we will head back to the upper Irvine near Darvel to see what we find there. We have a few small burns that we intend to fish but considering the lack of flow in most of them, they will have to take a backseat until it rains again.