We moved further upstream on the Irvine this morning and fished many sites new to me. This has been a great learning experience for the Trust and I hope anglers alike. From a quick assessment of today’s results, there are winners and loser…. rather, there are good areas and less good. Areas we expected to be full of salmon aren’t and some that we didn’t expect to be notable, are.

We started on the wee Irvine upstream of Priestland at Passford Bridge. This site was last fished in 2009 just after the sand quarry had ceased production and I think I’m correct saying that at that time, we thought it was improving. Certainly the source of the silt and sand that once covered the river bed had ceased and there seemed little doubt that numbers would improve with time. Passford Bridge site has ideal sized substrates for spawning and boulders to offer parr cover yet we were immediately disappointed by the apparent lack of fish. We caught 3 salmon parr and 7 fry and 13 trout from a site that should produce more. The substrates appeared clean and ideal for spawning but they were slightly compacted. In 2005 the same site produced 13 salmon, in 2009, just 2 and this year 10 so no obvious improvements. Trout recorded totalled 5, 28 and 13 in the same years. I suppose I’d describe this site as stable but poor. 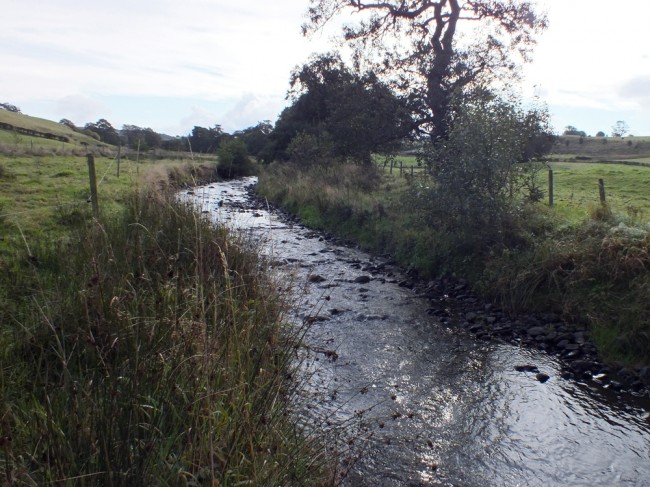 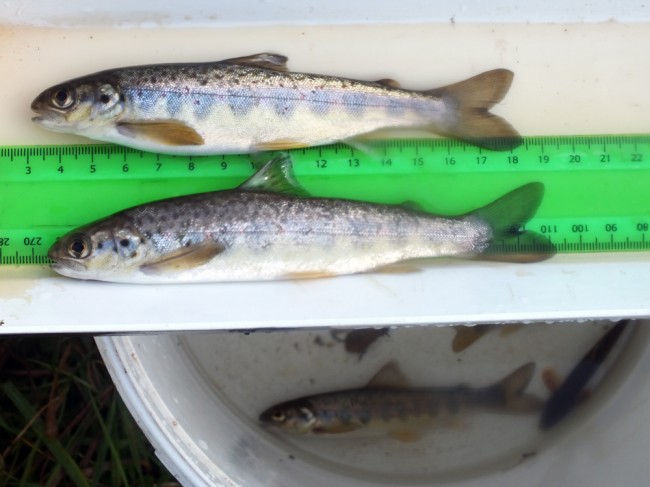 The parr we caught were in nice condition

Moving upstream to Mill Bridge, salmon results were consistent with those from 2009 but the trout population appears to have declined considerably; especially noticeable was the lack of fry. This may just be a temporary blip and I’ve still to analyse results fully so at present, I can’t say more. Above this site, trout are numerous in the deep holes and I couldn’t help myself and went fishing (electrofishing) for a minute or two. The results were pretty impressive. 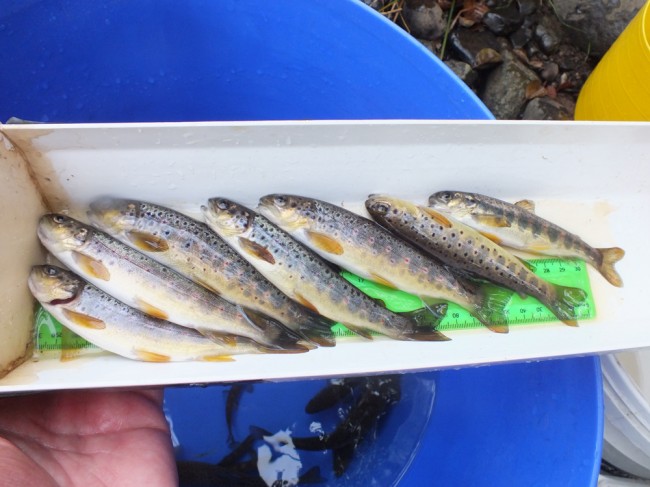 Just some of the trout (and a salmon) from the deeper hole I fished briefly. 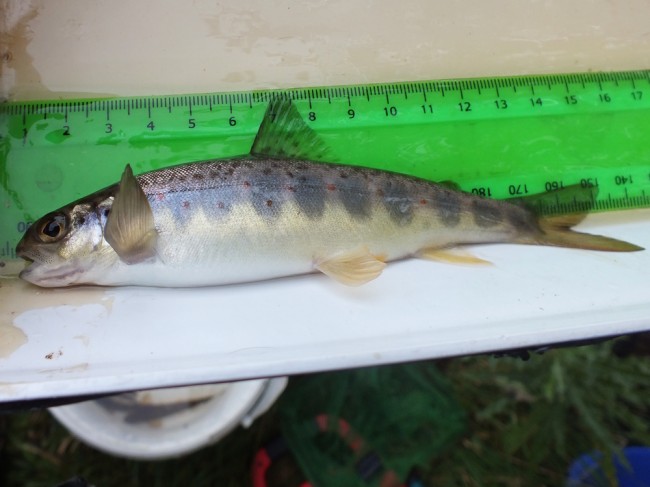 A stunning salmon parr from Mill Bridge site. Just look at the condition of this fish

We quickly moved to the Gower Water where we discovered that a discharge from a farm steading continues to pollute the river with sewage fungus, growing across the river bed downstream of the discharge by 50+ m. I’ve highlighted this to SEPA on several occasions over the years and will request action tomorrow as I believe this may be impacting on the fish population. We caught 11 salmon fry and 5 parr at this new site and I felt disappointed as the habitat had everything a fish could ask for. Trout numbers were better at 31 across the site giving a density of 35.7 per 100 sqm. The largest salmon parr captured (so far this season I think) at the site was 151mm which is big by any standards at this time of the year. It was a beauty and we took scale samples to age the fish. 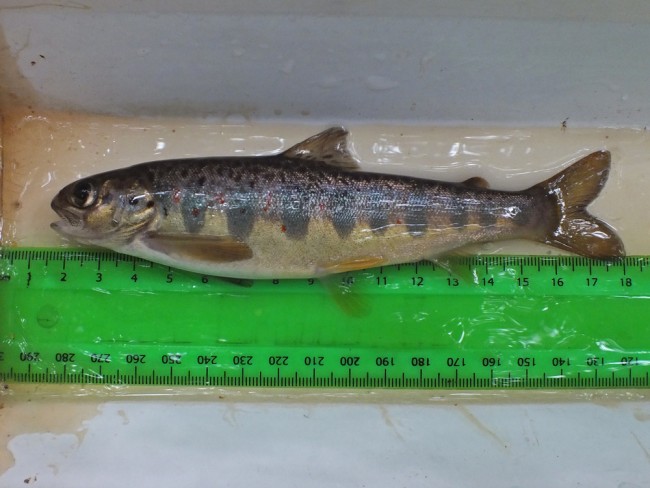 A huge parr in great condition at 151mm long 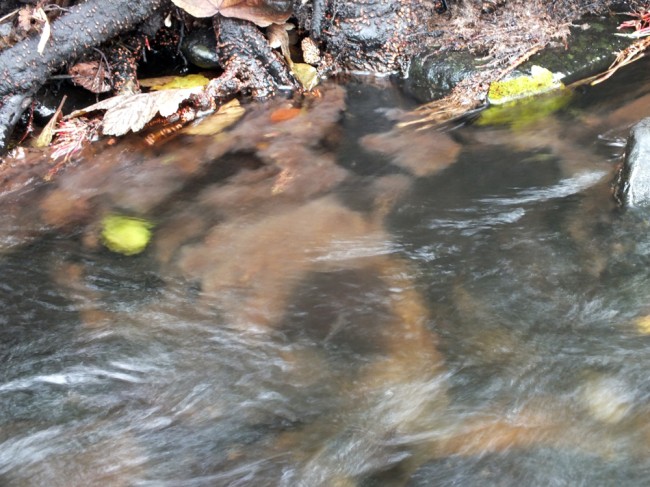 Sewage fungus growing in the river near Bransfield. This ‘cotton wooly’ fungus was traced back to a farm discharge. It will be reported to SEPA for their attention

A short distance upstream is an impassable bridge apron on the Tulloch Burn that prevents any upstream migration for trout or salmon. We fished a short stretch below this to compare results with the Bransfield site downstream. The site was smaller and the substrates weren’t ideal for spawning but this  is the upper limit of migration on this burn so we expected at least to find a few salmon. We did but just a few (12). Trout numbers were better at 29. Further upstream above the bridge we fished another site, just to check whether salmon were absent and they were. Trout numbers were surprisingly poor considering the good gravels and apparently clean water but of course it may not always be so clean. You can’t always see pollution, but often you can see the effects of it. It was last fished by Alistair Duguid in 2003 when he recorded only 2 trout. Todays results were better with 13 trout in our survey.

The Changue Burn was new to me as I’d never laid eyes on it before. This burn joins the Tulloch Burn to form the Gower Water. Changue Burn offers excellent habitat and apparently reasonably good water quality but once again the salmon population was poorer than expected with only 1 fry and 9 parr coming to the net. Trout again were better but not remarkable in any way. I’d like to spend more time in this area to see if I can find better used spawning areas as I believe there must be, given the number of parr we found. 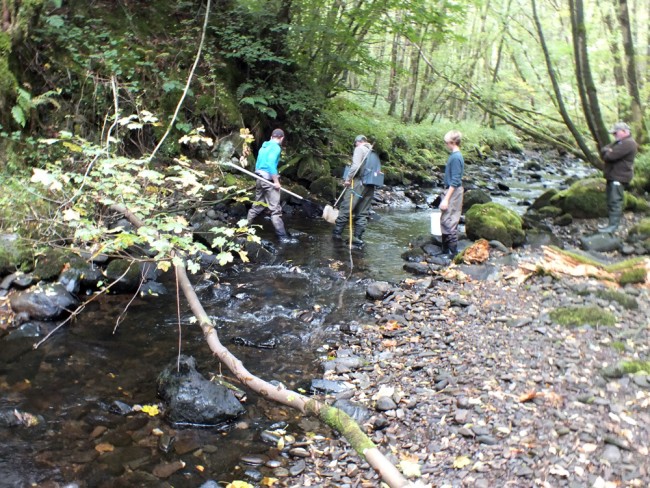 After a late lunch we moved to the Glen Water and fished 2 sites, one in the lower river and another in the upper burn near Braidley Bridge. Both produced salmon in reasonable numbers but again as on the Changue Burn, parr exceed  fry which surprised us. The Glen Water appears to be perhaps the most important production area for the Upper Irving based on our results this year and the length of habitat available. 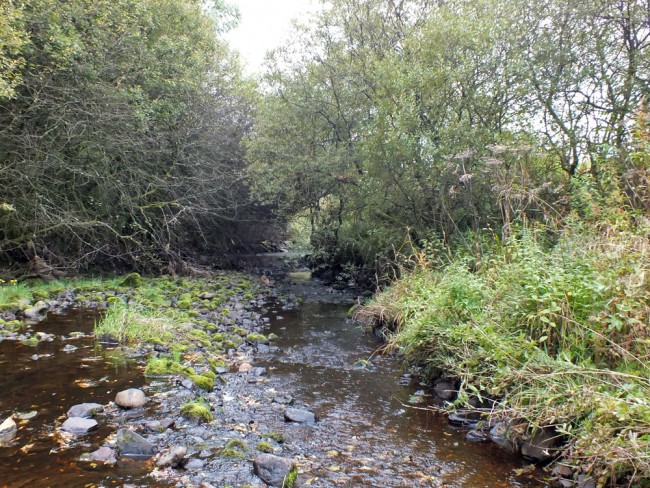 Finally we finished by surveying Mucks Water near Burnfoot Farm, a tributary of the Glen. This burn was stocked with salmon in 2006 but we failed to find any  evidence that they returned to spawn and in fact we found only 4 small trout. It is a dark peaty burn that rises in Whitelee Forest and this may be impacting on the fish population. I’ll return again in future to see if there is any change.

I did say yesterday that this is a huge learning curve for ART staff as none of us have much experience of the Irvine fish populations. In my opinion this has been a starting point on which we will build and consolidate our knowledge. Next year I’d like to look at the lower river and if possible the Garnock in detail. In the years to come, I hope we can continue to monitor these rivers regularly as we do for other Ayrshire waters.