Until we get rain, today was the last visit to the upper irvine. We set up a series of timed sites to allow us to return and monitor the juvenile population over the next few years. Starting at Hurlford and working upstream, the sites chosen were typical run riffle habitats where we might expect fry to be produced. Parr often feature at these sites but usually in low numbers unless there is adequate boulder cover. We aim to pick habitat where cobble and pebble substrates are dominant but often sites are a compromise.

The Hurlford site was just downstream of the road bridge  and produced a respectable 10.2 fry per minute with a further 3.8 parr turning up. The next site at Milton Mill consisted of excellent substrates but surprisingly failed to produce more than 9.6 fry per minute. As expected due to the lack of boulders, parr were recorded at 1 per minute. This was a disappointing site considering the habitat but based on a single visit, we can’t really draw too much from the result. I will be looking at this area during spawning times to assess activity. No trout were recorded at either site.

The main road bridge at Galston beside the bowling green was next on the hit list. We watch salmon spawning here most years but last year activity was reduced. The results confirmed this with just 7.4 fry per minute being caught. The good news at this site was that 5 parr per minute turned up and 7 trout. Another impressive feature was the size of the parr and their condition. Once again we  caught a 151mm parr. There were several others not too far behind and all seemed to be doing very well. 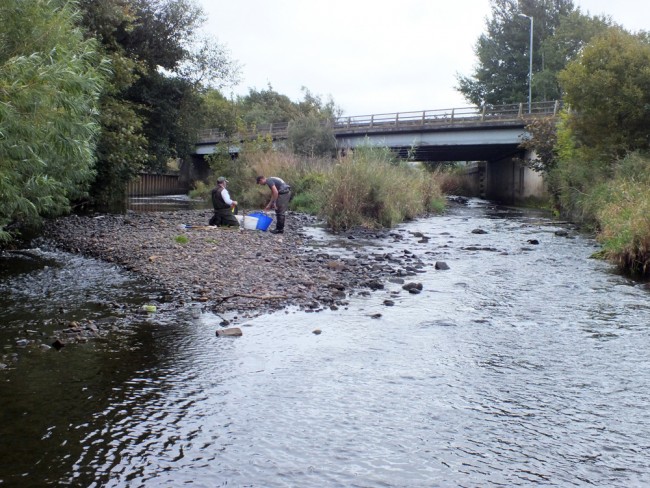 The site at Galston

Where the Hag burn meets the Irvine the substrates are in good condition and ideal for salmon spawning so we established a site upstream of the confluence. This was a poor site in comparison to all other fished today and I’m at a loss as to why. The fry totalled just 2.8 per minute and the par 0.4.  6 trout were caught.

Two more sites were picked on Darvel Club water. The fist was the run/riffle that has developed following the removal of Newmilns Weir. This was perhaps the least suitable site for fry of all those fished today but there were areas where I felt salmon may lay their eggs so we decided to proceed with this as there didm’t appear to be any other more suitable sites in this area. I did expect parr numbers to be better than at other sites. Results were reasonably good for fry with 8 per minute turning up but the real excitement came with the parr at 9.6 per minute. The parr on the whole were huge with the largest at 161mm followed by others at 156, 155, 153 and three at 150mm. We have taken scales to age this size range. We also caught some very good trout (17) with the largest measuring 255mm (about 10.5″). It’s not often we see as may large parr during surveys as we have on the upper irvine over the last week. It is getting late in the season but even so, these parr are large. I’m keen to look at the scales we took. 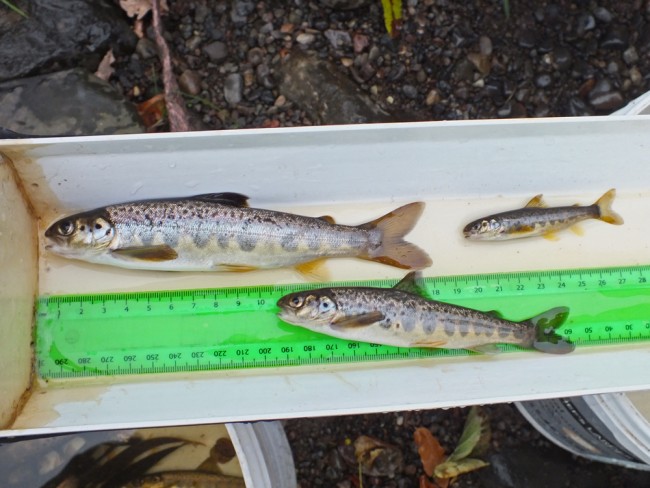 I expect these will prove to be 3 year classes of salmon. The large one was 161mm, the biggest we have catered in Ayrshire this season

The final timed site is behind the houses that back onto the Irvine upstream of the Glen Water confluence. 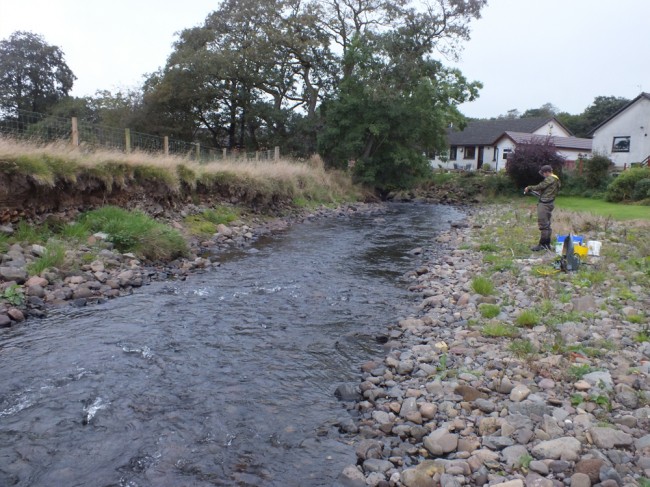 There is some very good run and riffle habitat where the bed is clean and consists of ideal material for spawning. I expected this to be the best fry site we fished all day given it’s condition and location on the river. I wasn’t disappointed and it produced 11 fry per minute. Parr totalled 2.4 per minute. I had hoped for more fry but 11 per minute is ok but nowhere near the numbers we expect on upper reaches on other Ayrshire rivers. This was skinny shallow water that most anglers would walk past on their way to the pools above and below. We managed 3 nice trout from this water! 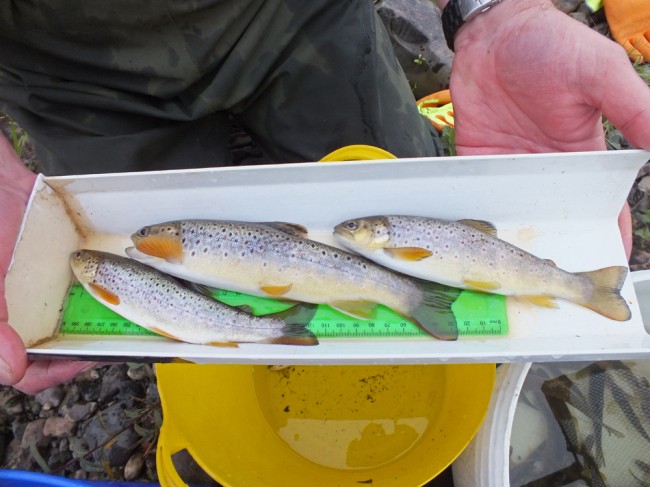 The timed surveys offer us a quick way to assess productivity from year to year. I’m already looking forwards to 2015 surveying for 2 sites in particular.