Again on the Ayr, we visited the Dippol Burn near Ochiltree to see what condition the habitat was in. Previously this burn’s fish population has been surveyed by ART and never a trout was found over several years although pollution tolerant species such as Stone loach, minnows and sticklebacks have been. This burn has long suffered from enrichment in the past but agricultural fencing is helping to exclude cattle, improving both habitat and water quality. Some areas however remain unfenced and degraded and I have requested a meeting with SEPA’s diffuse pollution specialist to discuss several issues across Ayrshire that concern me as there doesn’t appear to be much progress on this front in many areas.

We will again survey the fish population on the Dippol this year and if no trout appear in the results, I intend to seek a licence from Marine Scotland to introduce trout from the Lugar a short distance downstream to kick start a population again. There’s an impassible waterfall in Auchinleck Estate just above the Lugar so trout can’t repopulate the burn naturally at present. The photos below illustrate the difference riparian fencing to exclude cattle and sheep can make for the habitat and this in turn improves water quality and protects bathing waters from bacterial failures. A few trees planted within the buffers would be of additional benefit in the years ahead as water temperatures rise through climate change. 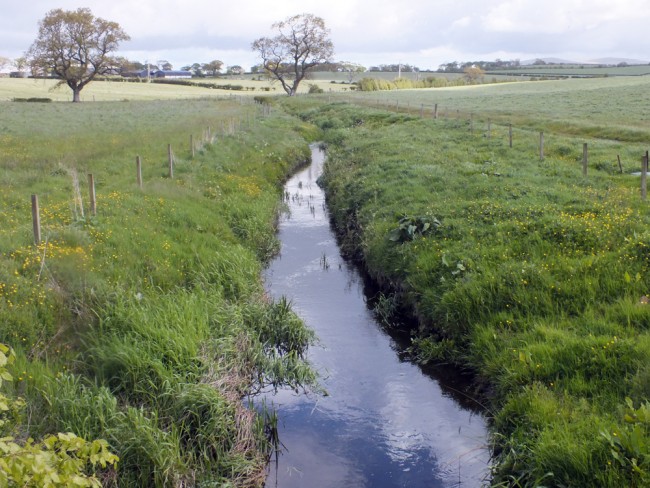 Upstream of Whirr Bridge on the catrine Ochiltree road. Lush vegetation taking up nutrients before they reach the burn. Adequate buffers are created by the fencing reducing bankside erosion and cover for fish and other species is improved. A few trees planted within the buffers would add shade and leaf litter which provides food for invertebrates and fish. 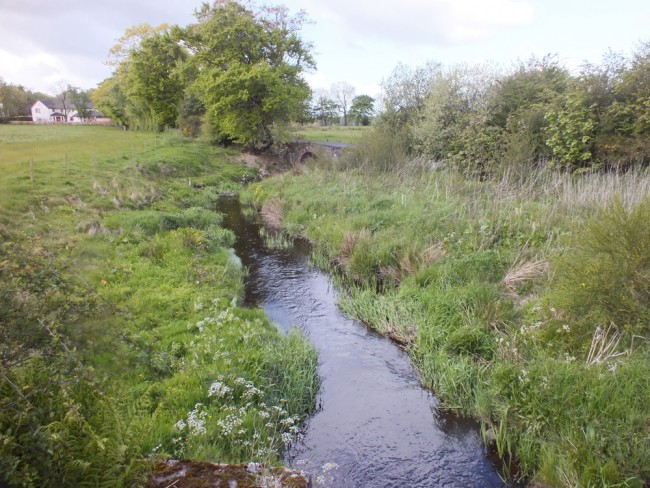 Recovering habitat immediately downstream of Whirr bridge. 5 Mallard ducks flew from the lush marginal vegetation as we looked over the bridge. It’s not just fish that benefit from fencing! 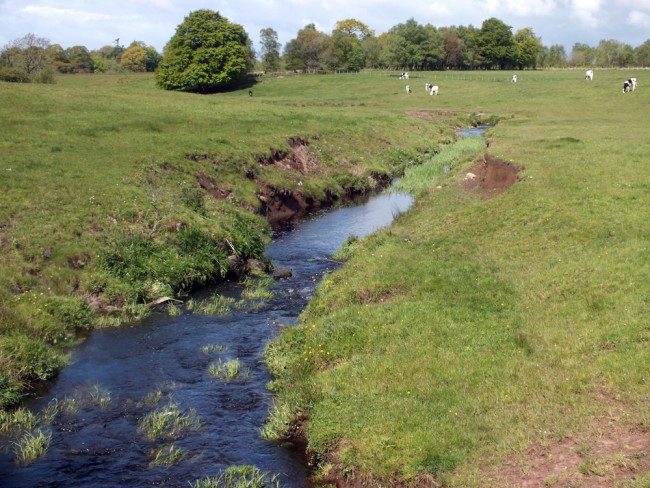 Compare this image taken 50m downstream of the previous photo at Whirr Bridge. Cattle graze the margins and access the burn causing erosion, siltation and faecal pollution. Overall this situation is typical of why the trout and salmon populations across Ayrshire declined as agriculture intensified. Stock fencing would go a long way to improve this situation. Unless livestock are excluded from our watercourses, then we can continue to expect poor results in affected areas. I will ask SEPA to have another look at this burn ahead of any stocking with trout taking place.

We met with the owner of Dalmore and The Tam O’Shanter Hone Works at Stair after lunch but I’ll save details of that for a later post about plans for the Stair Hydro. After that meeting , Muir and I headed to the Glenstang Burn that enters the Ayr immediately upstream of Stair bridge behind Stair Inn. This burn produces salmon fry and parr in the lower 250m or so but further upstream they are absent from electrofishing results and have been for some time. The trout population is similarly restricted to the lower reaches but we have recorded juvenile grayling in surprising numbers a further kilometre upstream. Obviously the middle Ayr grayling use this as a spawning burn which again is surprising given their reputation as a pollution sensitive species, but there isn’t really much choice for them downstream of Stair dam. The burn is another that suffers from enrichment as a result of diffuse pollution. I talked to a major landowner about fencing his water margins  three years ago but to date, nothing has changed or improved. I also spoke to SEPA about the need for fencing at that time and they agreed. I will again discuss this situation when we meet in the near future.

This burn has loads of potential but cattle are causing siltation and erosion along much of its length. The images below show the good, the bad and the downright ugly! I will press for improvement on this burn immediately as there are legal requirements for farmers to prevent poaching and access to watercourses. Another lesser issue is a small conifer plantation that is near maturity and should soon be harvested. It is small but the burn flows through the wood and suffers from erosion due to a lack of vegetation in the understory. This is due to a lack of light reaching the ground. In the wood, bank instability is a problem and this causes the burn to become over wide and silted. Once the woodland is harvested this should quickly improve. 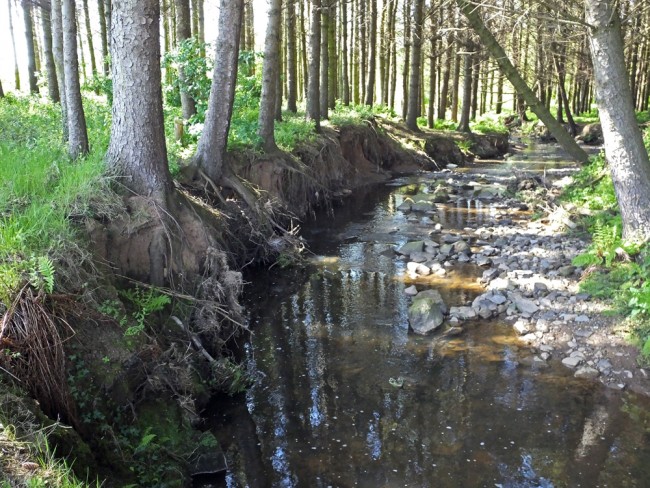 Bank instability driven by overtaking. The burn is override in this area 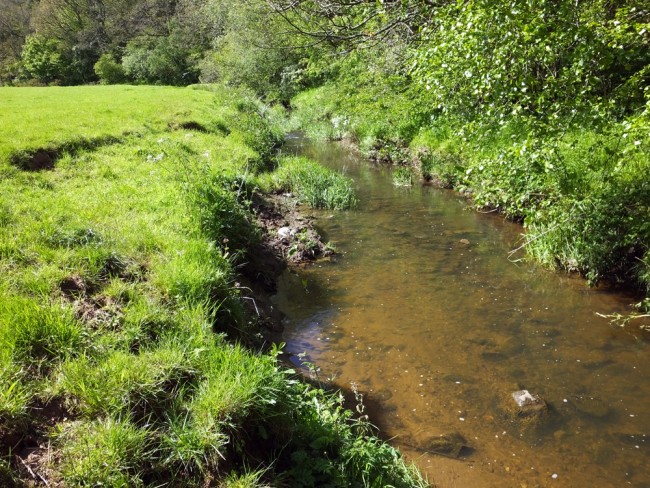 Silt on the bed smothers spawning and coarser substrates below. There are good spawning materials buried under this. The burn is over wide where cattle access for drinking but they have been almost totally excluded this year until the silage is cut hence the luch growth where sold erosion is usually evident.It wouldn’t take long to improve this habitat if it were fenced 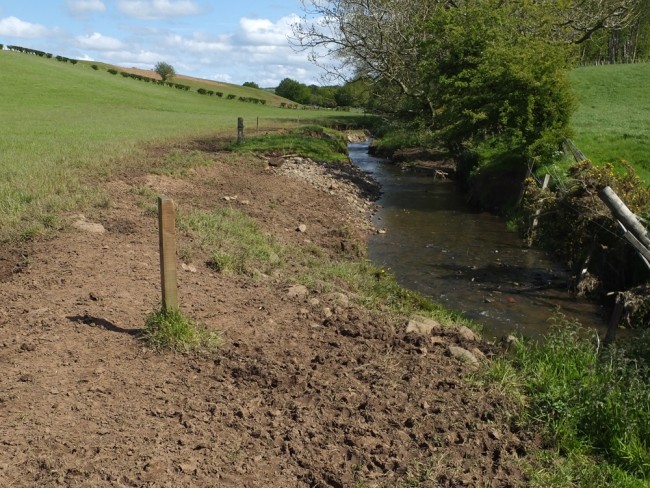 Severe erosion driven by cattle access. This ought to be addressed immediately 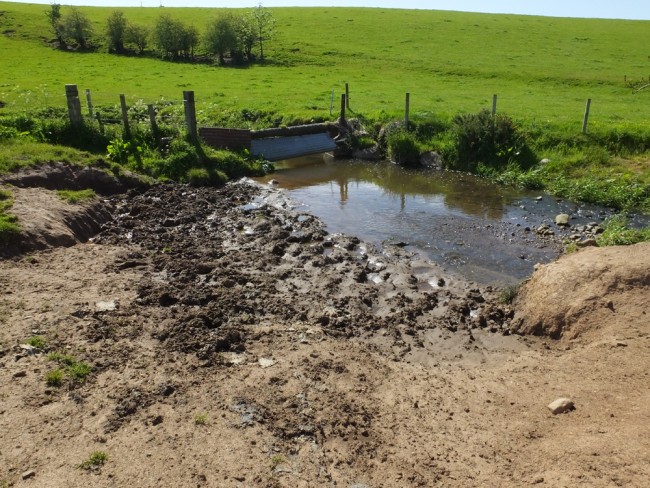 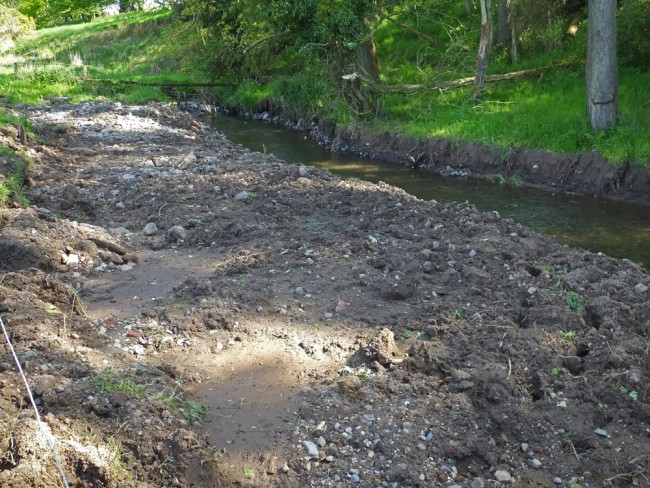 Dredging of this nature is highly damaging and I will discuss this situation with SEPA immediately.

The Ayr is not along suffering from diffuse pollution but it is perhaps the most impacted by these issues. We have been working closely with the Doon Board to install thousands of metres of fencing on tributaries and main stem that should address these types of livestock related issues and bring benefit for the fish and other wildlife. Grants are available form time to time to assist with fencing and the Doon Board currently offer up to 50% grant assistance for suitable project. This can be accessed through the Trust. On other rivers, we are aware that up to 50% funding is available through a Government Grant and will be happy to point anyone interested in the right direction but this fund closes on the 12th June so don’t delay…give us a call immediately.

← An interesting day out on the Ayr Catrine Dam today →