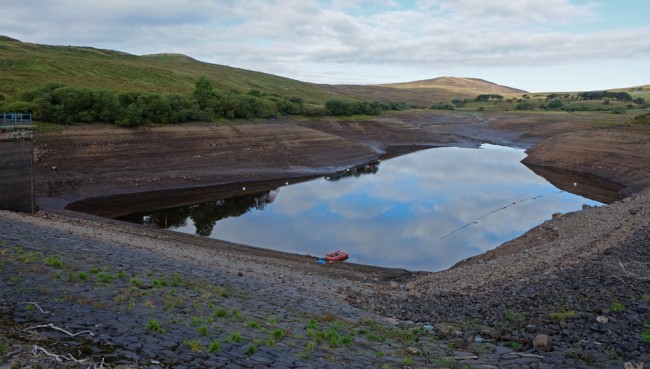 Caaf Reservoir at the start of our final day’s netting

Our final attempt to remove the trout from Caaf Rservoir ahead of it being decommissioned has been completed and this time we managed to catch another 600- 650 small brown trout. The total number of wild brown trout captured from this reservoir since May is over 2000 and all have been relocated to new locations.

Yesterday was a very hard day’s work at Caaf and everyone went home tired and covered from head to toe in mud but satisfied that the vast majority of the fish had bee caught. Gary Anderson, as ever was there to help and we are all grateful for his enthusiasm and hard work. Mark Hirst, a keeper from Fort William area was back again too as his knowledge of netting is invaluable. 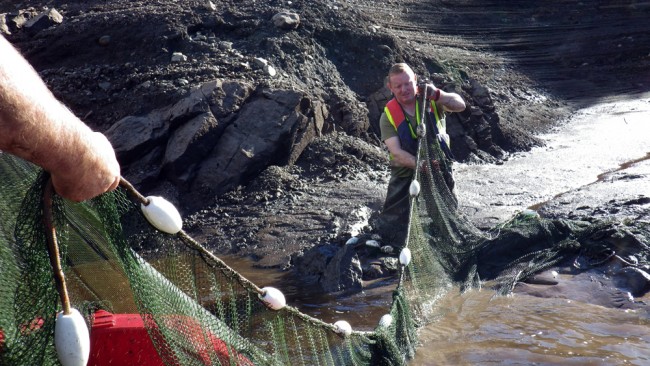 Gary Anderson getting on with the job 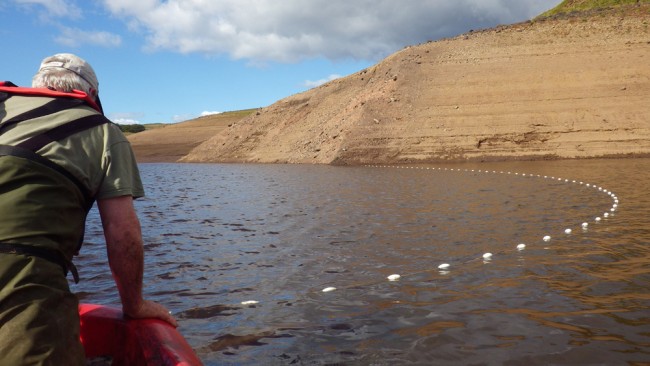 We commenced at the dam wall and progressed across most of the open water before finishing at the end of the day with a last sweep in front of the draw off tower. The last sweep produced just a handful of fish and we decided to call an end to the Caaf fish rescues as we are certain we’ve had the best of them by now. We noticed that todays catch lacked many of the 7 – 10″ trout that were prolific last time. There were a few but just a fraction of previous numbers. Instead we found far greater numbers of parr. These slipped through the larger mesh of the big net that we used last time. In May, water levels were approximately 3-4 metres higher than this time and we used a longer and deeper net custom made for the job. That net required 8 just to pull it and more to shoot it and free it from snags. Today we used a shallower net with smaller mesh size and although easier to pull this, once in shallow water, the volume of silt and mud that is picked up again makes it hard to draw. Netting in these circumstances isn’t an easy or straightforwards task. 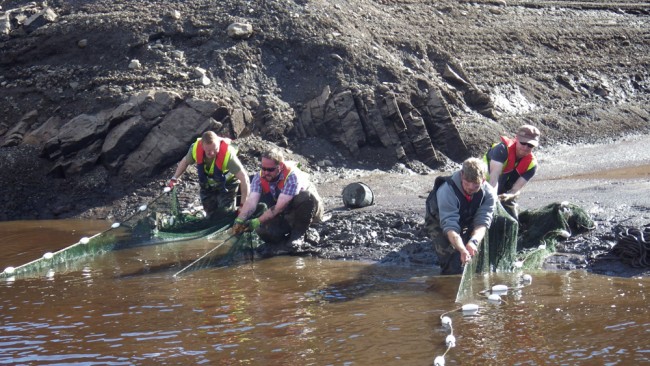 Hauling a net full of silt and fish isn’t easy 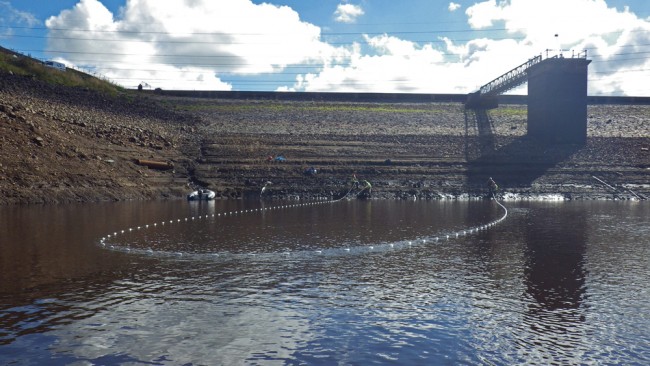 Closing in on the fish 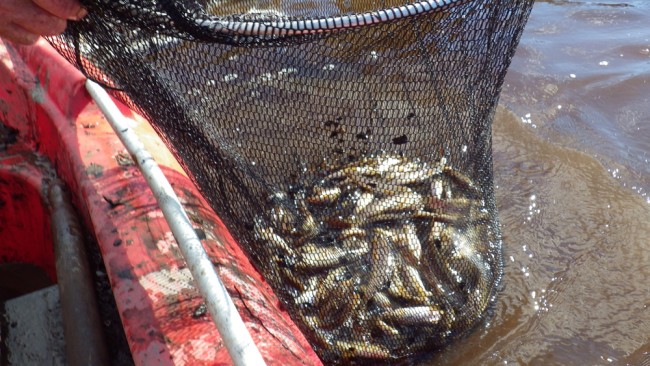 Almost 300 trout in this one net of fish. These were moved to a holding cage until the end of the day before being relocated to their new homes

After eventually recovering all our equipment and loading the vans and trailer, Struan and I headed off with the fish to stock them into their new locations. By the time we got there, the pump was dying and we lost about 10 of the larger fish. That’s disappointing but out of around 650 fish, 10 casualties isn’t too bad a statistic. I’ll order up a new air pump ahead of our next rescue. We’ve taken well over 2000 trout from Caaf and only lost around 12 fish throughout the netting and transport process so all in all I think that’s a good result. It reassures me that the methods and fish handling techniques we adopt are right for the job. 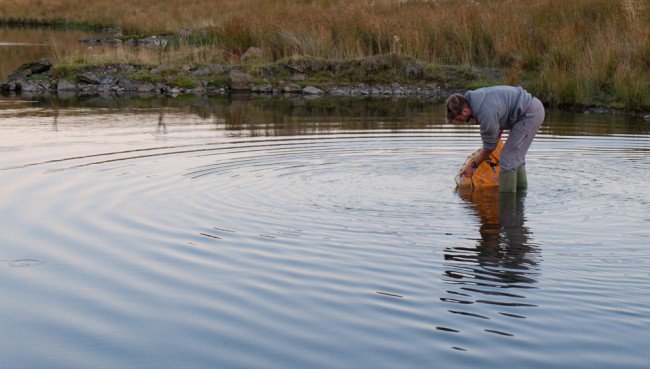 Releasing trout as the sun sets at end of a long but satisfying day. 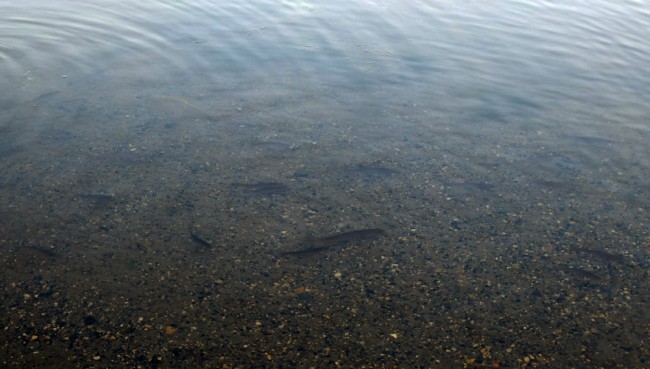 There are still trout in Caaf reservoir as we will never get them all but any that turn up in the settlement ponds during the final draw down, will be tranferred to the Caaf Water downstream. We have offered to return to do this for the contractor if they give us advanced warning. 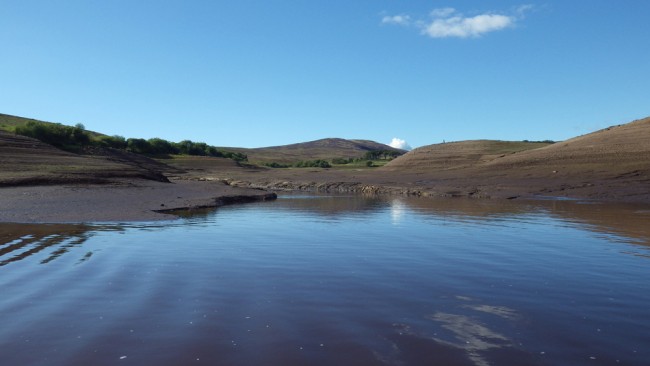 The burn flowing into Caaf is fully of fry. These fish will descend into the reservoir unless it’s emptied quickly

One final point that I will make to Scottish Water, SEPA and the contractors is that there are still fry in the burn upstream that will descend into the reservoir if they don’t get it emptied quickly. Any larger trout that we’ve missed will head to the burn to spawn shortly and natural restocking will recommence.  Should the final drain down not happen until next year, there’s a good chance that  once again there will be a parr population in the reservoir that should be rescued before it’s emptied. They need to find solutions to the sediment issues and get on with this quickly.

I’d just like to thank everyone who helped with this work over the months that it took. We hired in specialists and had numerous volunteers to help and they all made this a success and rewarding process but most of all, I’d like to thank the staff who always pull out the stops and work long hours to achieve a huge amount of good work every day of the week. The Trust would be nothing without them.