Silt and other issues affecting productivity

Our electrofishing season is all but over thankfully, as the injuries are stacking up and some older members of the team are feeling a bit tired. Age is a terrible affliction but with it comes experience so I do feel it has advantages (which I keep reminding my more youthful colleagues).

Due to drought conditions across Ayrshire we started our surveys almost a month later than usual rather than stress any fish that may already have been stressed due to high water temperatures and low oxygen levels. Consequently we have over run by a few weeks although this won’t affect anything other than results, but we bear this in mind when analysing data. 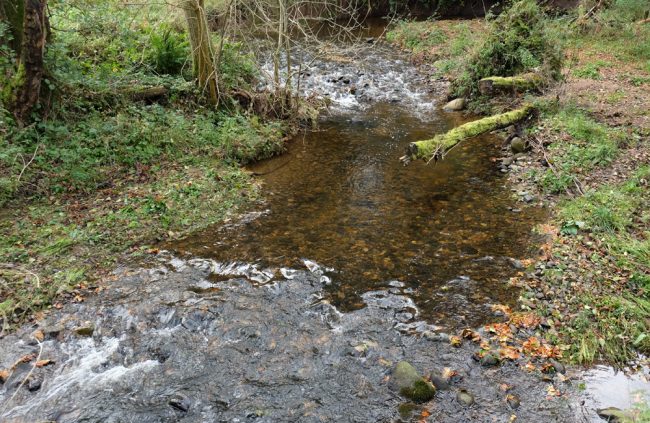 The Culroy Burn was once a silty burn until the Trust and board solved erosion problems with green bank engineering and fencing. The situation has rapidly improved and all we need now are a few salmon to return and spawn

We were out today mopping up a few loose ends and found a couple of lovely trout in a deep hole on the Culroy Burn. This Doon tributary has largely been fenced in the last few years by the DSFB and ART and we’ve installed willow spiling and bank stabilisation at severe erosion points. These measures have cut the silt inputs that once smothered spawning gravels. It was encouraging to see how clean the substrates were today despite a lack of salmon juveniles. There were some, but too few for comfort. What is really interesting is that this burn was stocked regularly by the DSFB until recently. Had stocking worked as it is often claimed, then why are there precious few salmon spawning here now just a few years since the last stocking? Trout numbers are good, improved on previous years and we are really encouraged that we may see more sea trout smolts  here in years to come as it was always known for this. 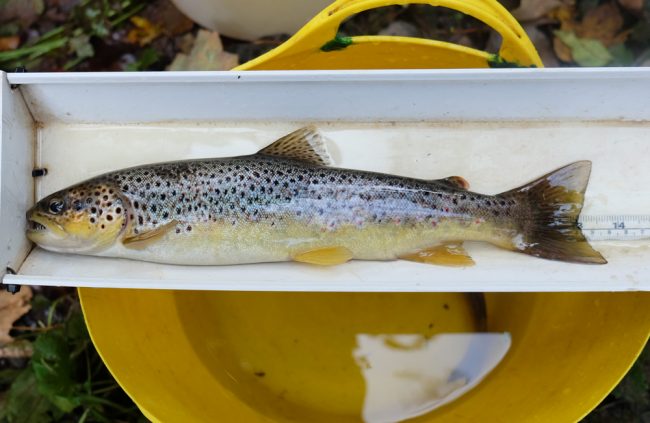 A large hen trout from a deep hole below a tree root on the Culroy. It’s mate was lying just a few feet upstream

The salmon numbers returning to the River Doon in particular have plummeted to low levels and the only areas where natural productivity has been consistently good have been the upper reaches (but these are now declining too). At the request of the DSFB, we stocked particular burns with salmon reared in the hatchery and will assess the output and future spawning to answer the questions that surround stocking. Presuming fry survive to parr and parr to smolts, we’d like to assess smolt output. We would then assess spawning in this area over the following years. Obviously if the strategy works, numbers should theoretically soar.

This river has had extensive hatchery intervention for over 150 years yet each time stocking ceases, rod catch has plummeted. Something’s not working with this strategy so it now more important than ever to work out what will. We are no fans of stocking at the Trust unless absolutely required.  That’s no secret but if a Board decides to, we feel we should at least assist with assessing results where we can and provide advice on areas where stocking may be beneficial while not impacting naturally spawning fish. Stocking over wild fish is not something anyone would advise due to the potential to damage wild stocks. We feel the approach we’ve taken at the Culroy Burn offers significant habitat improvement and this is key to naturally restoring fish populations in this river. With so few spawning burns available and many modifications to the main river for fishing, each and every burn should be restored to its full potential. 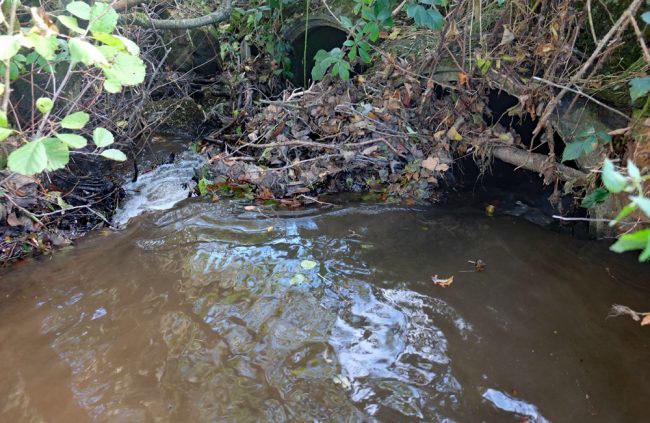 Elsewhere we found a blocked culvert on the Brockloch and Struan and I cleared that. Livestock poaching upstream of the culvert was severe and we will be asking SEPA to intervene. 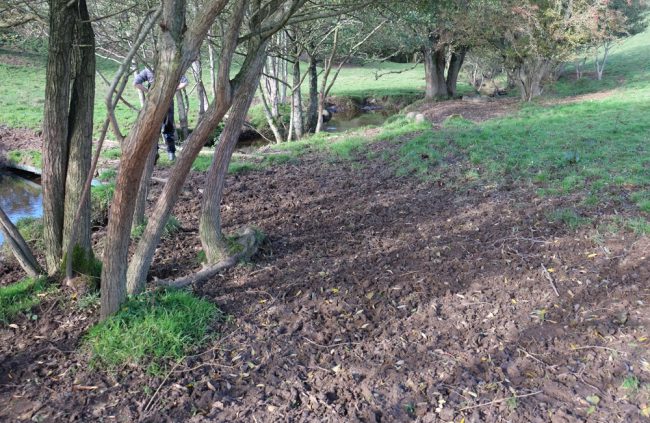 We class this as a severe issue and hope SEPA will too.

The silt and fine sediment released from this stretch once we cleared the culvert was incredible. The bed was totally smothered and rocks and gravel buried. Within 20 minutes, gravels were being exposed as the silt moved downstream. No wonder the Chapelton Burn downstream is in such a silted state. It is these problems that limit productivity and access. We need landowners to protect their water margins effectively and exclude cattle and sheep from the banks. The severity of the problems and state of this burn in clear to see in the photos below. 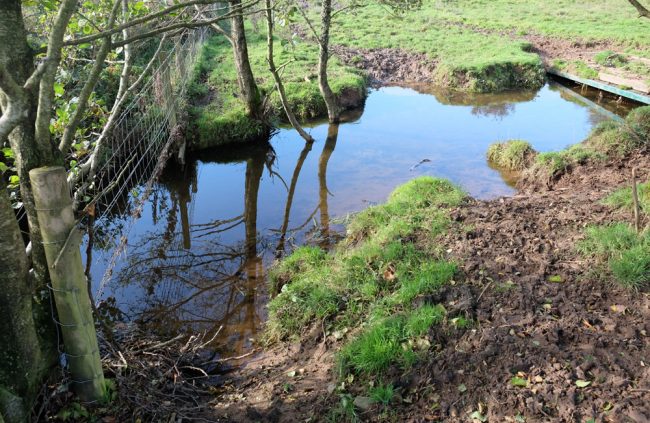 Prior to clearing the culvert, the water levels were backed up by over 30cm. Flow was reduced and sediment deposited on the bed coated natural substrates. Compare this to the next photo taken after the culvert was cleared 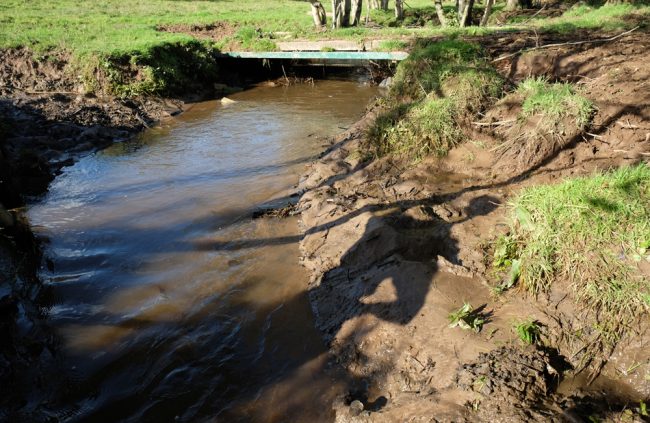 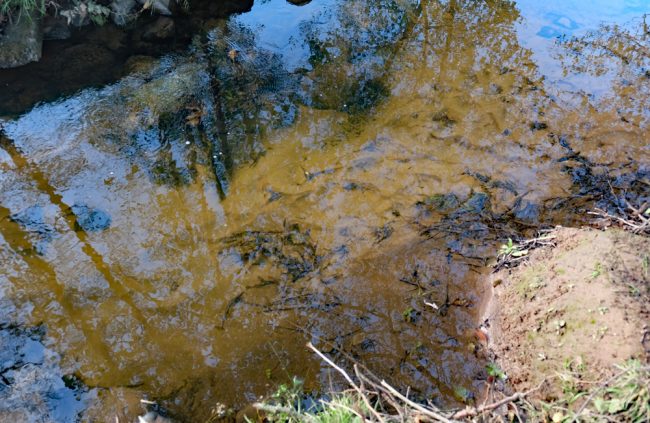 Prior to clearing the culvert, the bed looked like this for about 100m upstream 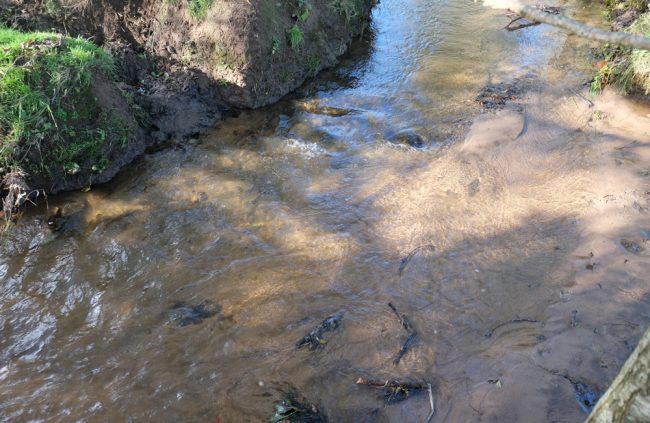 As the levels dropped, silt became mobilised leaving behind gravel, cobbles and boulders 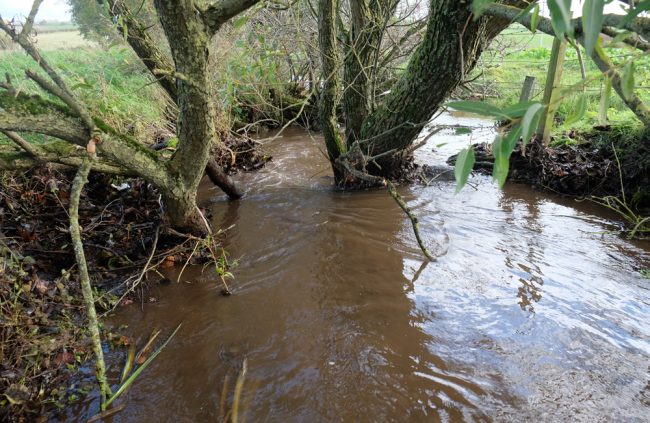