Long overdue but eventually I managed to visit the works at Dean Ford (I think it’s Lauder Ford, to be correct) where work is underway to replace the ford with a 4 section bridge culvert. It’s been years in discussion and negotiation but I’m pleased to report that the contract is well underway. This is the final major obstacle on the Kilmarnock Water sub catchment that needed easing to allow migrating trout and salmon to pass upstream easily. There are other man made obstacles on the Fenwick Water (the A77 culvert and the bridge apron at the North end of Fenwick) but neither are thought impassable or severely restrictive to migration.

Anyway, since I last met the contractors at the start of the job just a few weeks ago, progress has been made. The ford has been removed and work to construct the bridge is underway. The main contractors have taken incredible measures to protect the works and river from silt but of course occasionally, there have been hiccups by all reports.

Fish passage was our main concern during the works as they proceed throughout the migration and spawning season but there is a satisfactory side channel to allow fish to move upstream freely when the water is up. One added bonus of the Ford being removed is the mass of gravel and small sediments that have been liberated and can now be seen across the river bed beside and downstream of the works.

Today, the concrete foundations for the culverts were going in. I’ll keep an eye on this as time allows now that we have almost completed our electrofishing commitments. 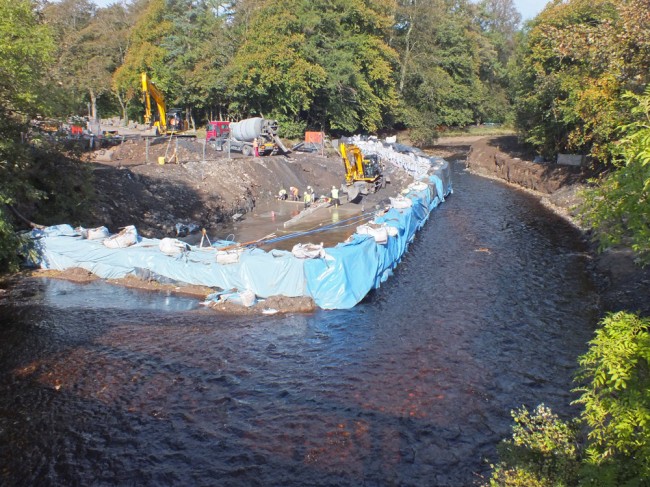 Further downstream, the Black Rocks that were made passable to migratory fish by the Trust and Kilmarnock AC through the construction of two weirs and fish passes were looking great today as the high water of the last few days was running off. I half expected to see a salmon or two and was disappointed and about to leave when out of the corner of my eye I thought I saw a large dark shape appear for a split second at the base of the falls. 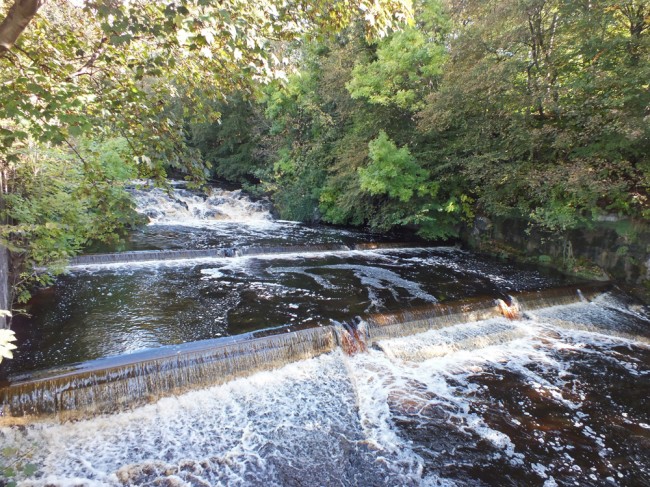 Black Rocks waterfall and weirs. All looking good and standing up to the test of time.

Now I don’t like to make claims that I can substantiate so I had to clamber down to the side of the falls for a closer look. It wasn’t long before my suspicions were confirmed and a hen salmon leapt towards me. That wasn’t the fish I’d seen as I was sure it was a bigger fish I’d spotted. A moment or two later and sure enough, a large cock salmon showed up and landed just a few feet in front of me. There was a third salmon trying to make it’s way over the rocks and I’m sure they would have managed in the flows that were there. I saw plenty of trout too and I’m sure some of them were sea trout.

These salmon are the future for this wee river and the tributaries that feed it. If they survive and spawn along with a few others, in just a few years, there should be many many more salmon running the Kilmarnock Water. It’s great to see them and will be even better when we find a few juveniles somewhere next year confirming success. 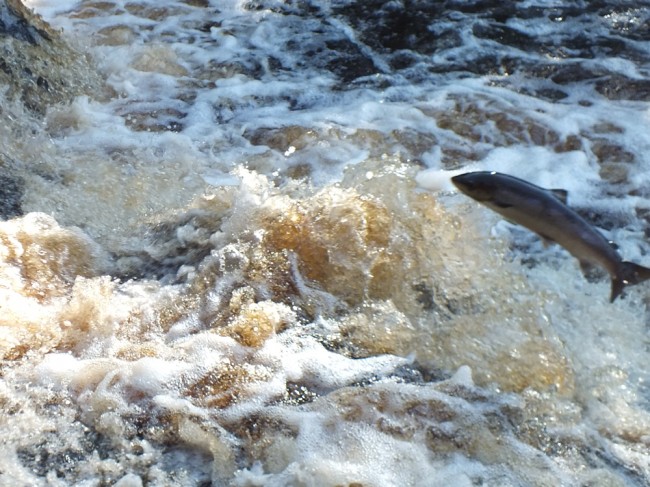 Poor light doesn’t help when photographing fast moving fish but I thought it was worth posting this image all the same.